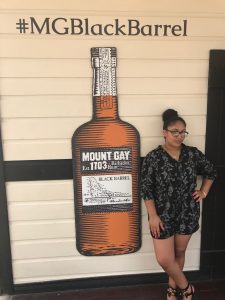 As stated on their official website, Mount Gay rum originated in the Caribbean island of Barbados in 1703 (mountgayrum). Plantation owners in the 1700s were known for creating a fiery spirit (an early distillation of what we now know as rum), Kill Devil, that was not easy to swallow. Their process of distillation had not yet been perfected. It was the contribution of John Gay, a service man and friend of distillery owner John Sober, that perfected the rum, making it a major source of income for their economy.

The tour I attended was led by a young native named Rahmal. He was so passionate about everything discussed, making it clear that his position in the company was more than just a job, but his life! He was very informed about everything related to Mount Gay’s products and its creation process. He shared fun facts, answered all questions in depth, and shared with the group that he has been studying beverages for years now. 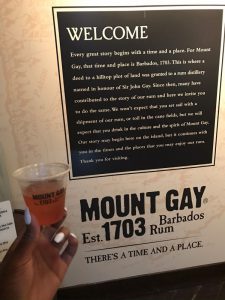 This is the first sign tour goers see upon entry of the Mount Gay Rum distillery. Also, photographed is the rum punch given to tour goers.

Rahmal taught the group the art of serving each variant of rum, the importance of not mixing with sodas, and the need to serve rum at warm temperatures are it was created in hotter temperatures than other spirits. He shared rum infused baking recipes with the group, his favorite being rum pancakes.

Upon entry, guests were given small cups of rum punch to indulge in while we listened to the Mount Gay backstory that was dictated by our tour guide. The second portion of the tour took place in a mini theater where guests were invited to watch a 7-minute film about the distillation of the rum. The tour then went on to a rum tasting and pairing with 4 out of their 5 rums. Their 5th rum, 1703 Master Select, was not included in the tasting as it is the most sophisticated of the line and highest priced. The tour then ended with a full Barbadian buffet dinner accompanied by all of the rums tasted earlier. 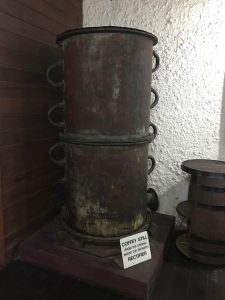 The earliest version of the still used at this site. They now use a much larger version.

Mount Gay has made it a point to keep the actual distillation of the spirit out of the public’s eye. According to their tour guides and brand ambassadors, it is a federal crime to enter the actual facility in which the distillation takes place. As fate would have it, there was a company wide meeting and production was suspended the day that I attended the tour. This resulted in Rahmal taking our small group into the actual distillery to have a glance at what their pot stills look like.

The distillery itself was much smaller than I expected. But to my surprise, this wasn’t the only distillation site in Barbados. This is the one that produces and bottles the rum sold at this site/tourist attraction. Considering the site itself is quite small, this made sense.

Revisiting the second portion of the tour, the video was informative but not in depth enough for people who study the making of spirits. I was later granted a one on one interview with a brand ambassador on a different day by complete luck- we just so happened to be on the same cruise later that week.

This is the information I later learned form Mount Gay Rum’s brand ambassador, Dario Prescod- all of which is done at a remote location at the northern most tip of the island, in the town of Saint Lucy’s, 16 miles away. 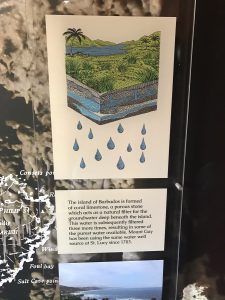 Here is a wall decal, explaining the coral filtered water used in the creation of Barbadian rum.

The fermentation itself was explained to be a molasses from hand cut sugar cane, coral filtered water found deep beneath the surface, and an exclusive proprietary strain of yeast mixture. According to National Geographic, Barbados has a long history of having an abundance of sugarcane which has contributed to a prosperous economy (nationalgeographic). This sugarcane led to the introduction of black gold, better known as molasses. Barbados is a country full of rich soil and vegetation, beneath which are natural layers of coral. The coral beneath the land’s surface serve as a natural filter for the water used throughout the island. This water is then filtered three more times to ensure absolute purity. Additionally, there are two fermentation processes that ensure Mount Gay rum has a unique taste. They exercise controlled and open air fermentation.

Closed fermentation is integral to perfecting Mount Gay’s signature formula. It consists of a two-stage process that is performed by experts who dump selected yeast into a prefermenter container. After, experts move the fully grown yeast in to a new container for fermentation. This way, the wash or liquid product of fermentation can be closely observed (stillspirits). The product is ready for distillation at 7-10% ABV, takes anywhere from 36-48 hours to be distilled in column (continuous) stills, producing single distillates. 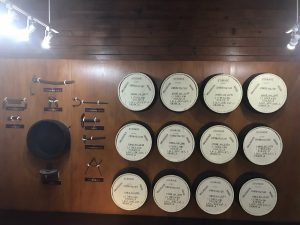 Wall of tools and barrels used during the fermentation, collection, and storage processes.

The open-air formula differs in that it is done outdoors, atop a grassy hill in 5 wooden vats. What makes this method unique is that the fermentation and yeast growth is controlled solely by the environment, which cannot be duplicated anywhere else as Barbados’ environment is exclusive to them. The open-air product is ready for distillation at 6-8% ABV, takes anywhere from 36-72 hours to be distilled in pot stills, producing double distillates (esquire).

Essentially, the stills separate the alcohol from water in a fermented liquid. The introduction of a heating element boils the liquid and causes vapors containing alcohol to rise into the boiling chamber. It is then moved into a condenser where the vapor is returned to its liquid state, and deposited into a collector. 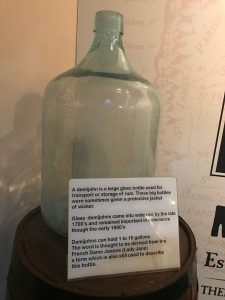 Rum was originally transported in these glass bottles. During that time it was discovered that rum tastes better once aged; prompting the introduction of barrel aging.

The blending of both products results in a rum that is deep, smooth, aromatic, and full bodied with scent profiles of banana, mocha, vanilla, almond, and lots of citrus. Additionally, the use of both distillation techniques results in less congeners and sulfurs that come about during the process.

Following all of this, the finished products are aged in toasted white oak barrels that are created both in America and in Barbados. Master blender, Allen smith has been with Mount Gay for over 30 years and is the sole say so on whether a barrel is ready for bottled. It was explained that it takes a trained nose to tell if the rum has been matured fully. This can range anywhere between six months and 3 years depending on the climate and the type of still the rum was created in. Pot still often needs longer to mature before being released to the drinking public. 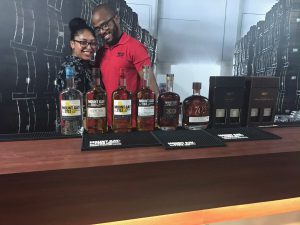 Rahmal and I behind the bar during the tasting.

According to both Rahmal and Dario, there are two Scottish and two Spanish pot stills that are managed by the same operator for more than thirty years. After one full day, each still produces enough rum to fill 45 oak barrels.

Learning all of this following the tour only helped to connect the dots I may have missed the day of the tour and tasting. Overall, the tour itself was a lovely experience. I highly recommend it to anyone vacationing there regardless of having an interest in beverages or not. The staff there are extremely friendly and knowledgeable of their products. Thanks to Rahmal and Dario, I learned and understand the process of distillation. 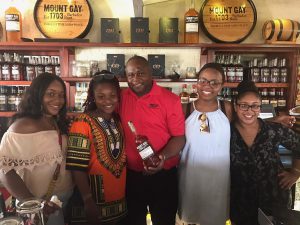 Friends and I posing with head mixologist at Mount Gay, Steven.

(David explains the difference between the pot and the continuous still, as well as               which spirit each machine is used to produce.)