definition: Cause (a fire or light) to cease to burn or shine.

The word “extinguish”  in the stanza means the nightstick stops or destroys the light in people’s eyes . I believe the hidden meaning of the sentence is that it breaks people’s dream, or hope for their future.

Sylvia Plath was born in Boston, Massachusetts on October  27, 1932 and died in , London, England on February 11, 1963. She published her first poem when she was eight years old. But it was also the year that her father died. Her father’s death became one of the main causes of her mental problems. She was admitted by Smith College on scholarship. During her college life, she started to feel depressed. And she even tried to swallow lots of sleeping pills to kill herself at the age of 19. After her first suicide failed, she then continued her degree and earned a chance to study at Cambridge University in England. She met poet Ted Hughes there and married him in 1956; however this marriage came to an end in 1962 due to the man cheated on her. During that time, they had their first kid Frieda, on April 1st, 1960. But she miscarried her second child. According to her therapist, Hughes physically abused her even when she was pregnant. In 1962, her son Nicholas was born. In 1963, she published a novel called “ The Bell Jar” which describes her mental illness while she was in college in 1953. After that, she killed herself by inhaling gas from a kitchen oven.

The word “neglect” in that stanza shows that those Puerto Ricans give up the time of  studying their own culture to get used to the society. In order to be employed, they spent more time on learning English.

Definition: A person whose business is preparing dead bodies for burial or cremation and making arrangements for funerals.

When morticians have job, it means somebody is dead. On this poem, this means those Puerto Ricans have an unsecured life.

1.Showing a casual and cheerful indifference considered to be callous or improper.

The word “blithe” have two meanings as an adjective based on Oxford Dictionaries. I believe it means “happy or carefree” on the poem, because when mechanics sing , they sing in a happy or carefree way. I do not see any improper or callous from the context.

Definition: A religious folk song or popular hymn, particularly one associated with Christmas.

This word “Carols” specifies the type of song that the speaker hear. They are not pop music, not country music. They are religious songs. 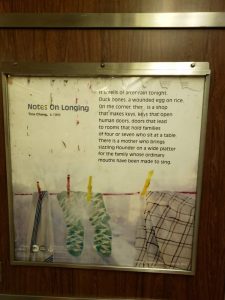 I found the poem “Note On Longing” by Tina Chang on the R train. When I first read it, I felt like I was watching a video. The words are like a video player that play the scene into my mind.  It was describing a peaceful night that a family was having a dinner together. The art that goes together with the poem shows a white towel with strips, a pair of green socks with some kind of patterns on it and a white towel with grid pattern are hanging on a red string on a very sunny day. This picture gives me a warm feeling which matches the feeling that the poem gives to me. But, I do not think the art is the best for the poem, because the poem is describing a scene which happens at night. This poem was chosen to be subway reading, I think it is  because the poem can make the subway rides more relax and make people feel like their simple peaceful life is the best. A peaceful after-rain night, duck meal, egg over rice, family dinner and sizzling flounder all makes people want to go home and feel less stress. The poem is exploring the beauty of life. The scene that the poem describes was the dream life that the speaker wants to have. It makes me want to cherish my life more. I think this poem is very easy to read. I can picture the scene very easily.

Definition:  The complete loss or absence of hope.

Found in “My Boy Willie” by anonymous line 26

“Despair” indicates that the speaker not only feels sad, but also feels hopeless. The future without her boy is not worth her looking forward to it.

Definition:  to wait somewhere secretly, especially because you are going to do something bad or illegal

Found in “We Real Cool” by Gwendolyn Brooks line 3

The word “lurk” in the poem means “we” secretly do bad tihngs until very late. And this makes “us” look cool.

Found in “Pity me not because the light of day” by Edna St. Vincent Millay Line 7

The word “hushed” originally means very quiet.  So, the sentence means the desire of a man becomes quiet very soon. In other words, a man’s desire disappears fast.