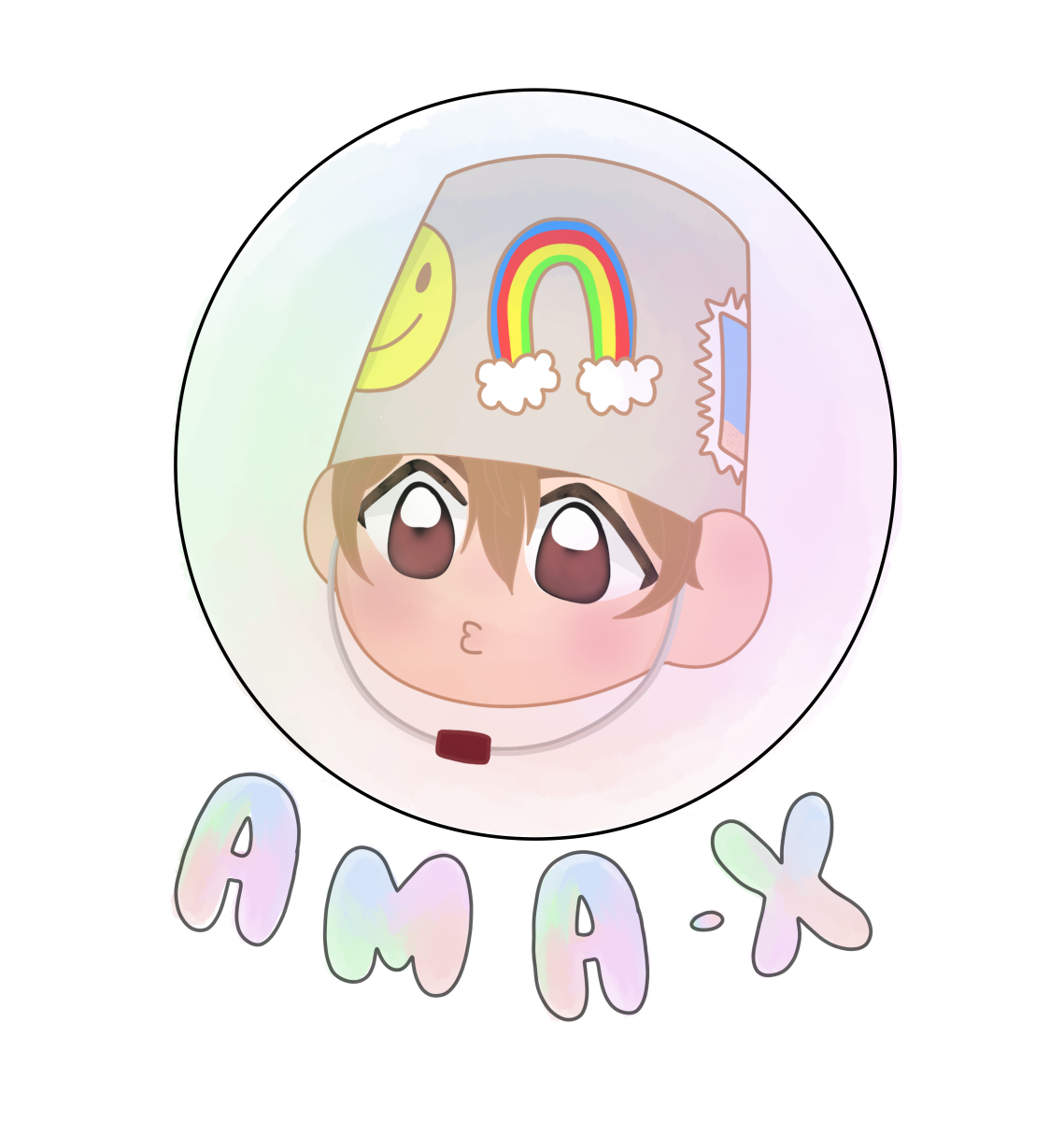 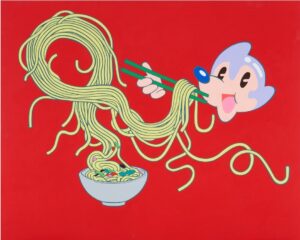 One of the pieces that I really liked was Lee Dongi’s Atomaus Eating Noodles. The reason why I like this is because of it’s simple design with a really good use and sense of colors on the canvas. It especially compliments it because it seems like it was going for more of a pop art style being that it was in the early 2000s. Even though I am those people that really don’t like contemporary art, I really appreciate this kind of pop art and it really puts me in mind of two artists that I look at which are Sakurai Hajime and Madoka Kinoshita. Plus I really love and appreciate the cartoony aspect of it as well because I am someone that draws in that kind of style at times. 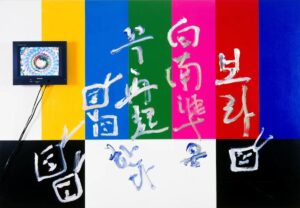 Another one of the pieces that I really liked from this exhibition is Paik Namjunes’ Rainbow Stripes I. The reason why is because of its unique use of different tools in order to create this. Where he uses the wall to color it into this flashy TV screen and uses an actual TV which also has a rainbow aspect in it. I also really love how clean the lines are for the TV screen and the use of brushstrokes for the characters/lettering as well. It gives an illusion that I am actually watching a static TV screen. 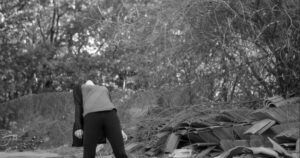 Another piece that I liked from this exhibition is An Jungju’s Ten Single Shots. The reason is because of the way how the images are taken. It is supposed to depict people who move in response to sounds which their subject matter was about gunshot sounds/war. The dancers in these pictures would move with the feeling that they are going to die. I like how these pieces tell a story depicting someone who is dying from the war. I also really appreciate the lengths that the dancers went through to get the shot or moment of someone dying or falling to the ground.

I honestly wish I can get my characters and work copyrighted. It’s honestly hard being an artist sometimes because you would have to worry that one day someone is going to take your work and use it for their own profit.  It’s something that I take very seriously because I would experience times, where my artwork was stolen. However, that’s why it is wise for illustrators and creators alike that really want to go into this kind of profession will have to go and get their work copyrighted in order for them to have their work protected under law.

Blog #15: Use of Illustrations & Photography

As for the Use of Illustrations & Photography, I feel that this was very helpful because I like to design and illustrate. It is also something that I really want to do when I get into that particular career/profession. This guide helps me understand how illustration can add somewhat of a flare to projects. However, when it comes down to using illustration for this kind of setting where the client is involved, it is very complicated and a bit of a challenge. You have to understand what the client wants and have to look from the perspective of the client in order to understand what it is that they’re envisioning because at times it can be hard for most to envision it. I’ve at times would struggled to figure out what it is that the client wants. For SweepsForACause, I was pretty confused as to what it is that they wanted at first, but coming together with others, helped me understand her perspective on what exactly it was that she wanted.

My internship from what I can tell doesn’t really require a creative brief. Unfortunately, I was not able to attend a meeting to meet the client for SweepsForACause too, but I was able to get an idea of what they wanted through my supervisor and my co-workers. I heard a lot of specific things that she wanted in her designs and I took them into consideration and created sketches and concept art for those ad designs. So, far, when I was days into the internship with my sketches, my supervisor along with some of the client’s input made me change certain aspects of my sketches in order to make something more unique than it just being a simple broom that represents sweeps. So when it comes down to working with a client, critique and feedback is a must to make your designs look the way how they envision it.

A collaborative project that I worked on during my internship was a campaign called SweepsForACause. It was about 7 to 8 of us working on the project together. Since we’re still in the pandemic, we communicated with each other either through Google Meet or the group chat that was created. We would just send each other our designs and give each other some feedback on what looks good and what we could improve on. What was successful about it was the feedback and critique that we’re given to each other because we were able to grow with the feedback that we received. What wasn’t successful (at least for me) was being able to speak to the collaborator that was in charge of SweepsForACause. There was always an inconvenience every time I tried meeting with them along with the others when they had scheduled meetings.

Blog #12: What have I learned from resources

Key points that I learned from a Webinar, podcast, or other self-directed learning experience we covered in class is how to look when you are on video calls or on an interview. I’ve learned that lighting matters when you are going into a meeting. When looking for the perfect lighting, you need to be in a well-lit area that doesn’t cost a  lot of dark and heavy shadows. For camera angles, you have to make sure you’re not showing your bad side.  You have to make sure that you’re not slouching or showing an angle of yourself that looks unflattering. Lastly, for your appearance, you have to look at least business casual and professional. Your hair has to look neat and your face has to look the same whether or not you wear make-up also.

Someone that I already know that was in the internship that I looked up to as somewhat of a role model is my best friend. The reason why I feel like this is because of the way how he was able to take charge of the meetings when our supervisor wasn’t there and just being able to verbally communicate with others in a very professional and formal way, it’s just so moving for me. As a person who very much struggles with speaking with others, it’s very inspiring. It honestly makes me want to really improve on my communication skills so that I will be able to speak with others in a very formal way. Hopefully one day, I’ll be able to perfect it like my friend.

For this particular project (That I’ve only worked on throughout my internship), I feel that my performance was efficient on the job. The supervisor really appreciated the skills and work that I gave to them. However, I feel that my skills with coming into a meeting need room for a lot of improvement. The times where we have meetings with the SweepsForACause collaborator, I am always never there because either I forget that there was a meeting sometimes or I was just really busy on that day. I know that in an ACTUAL job, this kind of behavior would be unacceptable, so I will try to take liberties into making this (such as meetings and other things that are involved with having to schedule things) more a priority.

Even though this was stressful and at times overwhelming, I am glad that I’ve finally finished my internship with 120+ hours!!! WOOHOO!!! It was such a wonderful and very fun experience since this will help me actually understand how to hunt and get a job in the future. Everyone in the internship was very friendly and helpful to me for any kind of help that I needed and because of them, I managed to make some pretty neat designs for GivingForward’s Sweepsforacause campaign. It was a fun rodeo, but it has now come to an end. However, I will still keep in contact with the people of GivingForward and give them a helping hand if they need it. Also, this internship experience made me realize that you have to take what you can get and not wait until the last minute to find or get a job. It only just makes finding a job a very stressful and an overwhelming experience especially also when dealing with classes on the side, but you live and you learn from those experiences.