Y2K is the name of the disease. I began my disease in Turkey for my first game. It took about forty days to affect the first one hundred people and one hundred days to affect the first 1, 000, 000 people. The first death occurred on 350th day. It took about 350 days for the first death to occur because of the advance medical technology we have today. I think we are in the era where medical technologies are adequate, sufficient and ready to cure or relieve disease and illness. With the advanced medical technologies, we are better and prompt at managing, diagnosing and treating new disease sand  illnesses. This plague started in Turkey and spread out worldwide did not destroy the human race.  It was eradicated in 742nd days by the clinical research finding with 100% cure. My second game began in USA. It took about three months to affect the first hundred people and six months to affect the first 1,000,000 people. The first death occurred at one year after the disease started. The plague destroyed the human race in 636 days. It took longer to affect more people in the wealthier country, the USA, than in Turkey. However, the disease started in USA wiped out the human race not the disease started  in Turkey. I was little surprised with the result. I thought  the wealthier country would have better health system and clinical research team to manage and contain the disease. The game definitely helped me better understand the pandemic transmission. I think the technologies of aircraft, wars and trades play a big part in spreading the disease. I could see the affected people spread the disease through traveling via boats, ships and airplanes. The under-developing countries were affected and got destroyed quicker than the wealthier countries. The climate also contributes to the gene mutation which makes it harder to kill the disease.

Artist Carrie Mae Weems have appropriated Zealy’s photographs into monochrome red in her series “From Here I Saw What Happened and I Cried.” This monochrome red effect on the photographs amplifies the sadness of the history and the racism occurred at the time.Figures in the first four photos of the series were nude. Their emotionless facial expressions actually indicate that they have no power. In fact, they were objectified. They were granted no right to wear clothes in front of the camera. It disturbs me to see this series of photographs. The monochrome red effect makes me think of hatred. It also stimulates my anger. The caption in each photo further amplified the evidence of racism in Black in the history. This series show us the history of Black in the society dominated by the White. This shows how Black were treated inhumanely and unfairly. However, I think the texts give more meaning to the photos than the photos show us. If these photographs were narrated with medical diagnosis or information I believe the whole perspective would be shifted.

The image I chose from the Wellcome Library is called “Mr Gledell, suffering from a rodent disease which has.” This watercolour painting, painted in 1829, is one of the six portraits forming a group of works showing gentlefolk of Leeds with grievous illnesses. The painting shows a young, white man with short black hair dressed in a black coat and stock, possibly in upper class society. He is almost emotionless. It is hard to tell whether he is calm or unhappy. And the grayish white on the background of the painting gives a feeling of sadness. The painting captured my attention because of his red nose. It looks like the red nose that we all get in the cold winter season. However, looking closer to the painting we could find a flat red scaly patch on his right nostril.  Indeed, this young man suffers from a rodent disease which has consumed his left nostril. This young man is facing half left, so we could not see the disfigurement on left side of his nose resulted from the rodent disease. This is similar to the images we saw in class. They all depict some types of diseases, illnesses or cancers. The only difference in the painting is the hidden of the disfigurement because the young man is facing half left and looking away from the painter. 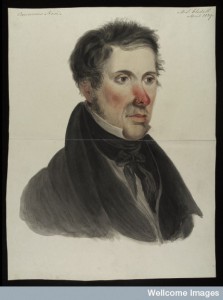