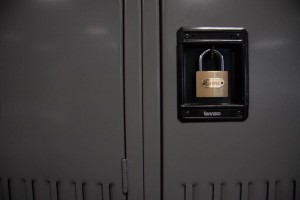 This photo has is a great composition that has a fantastic rule of thirds and is at eye level. The black box on the locker is contrast to the gold lock color and the vertical lines on the side of the locker lead your eyes down and box in the lock.

My goals for the campaign are to showcase the cars speed, while also showing the electric cord and how it is the most important feature of the car. I selected Clint Clemons as my favorite photographer out of the three guys because he focuses on the important parts of a composition. Most of his works have great vibrant color blurs that outline the cars. The photographer also captures great angles of view with the subject and the photographer has most of his photos blurry showing a sense of motion with the vehicle being still which would help me get the speed I am looking for. The photographer brings a great sense of understanding that he will bring to the the brand. 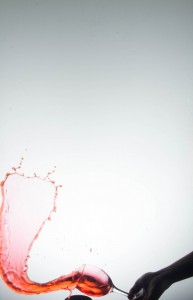 This is my best picture of the splash water assignment, because I love the gradient color of the water and It reminds me of a waterfall. Most of our picture didn’t have to much fall off effect but it would have been even better with an all white background. 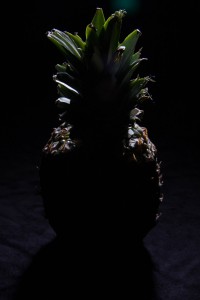 This picture I believe is the best composition of the negative campaign of pineapples because the picture has a feeling of being dark and mysterious. The picture has high contrast between the light and the object. The silouette shows that it is a pineapple and you can’t see all the details. The diffuse light also sets the mood of the dark and eerie photograph. 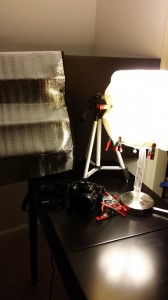 This is my DIY Studio which was not to difficult to find a table because I knew that my vanity folded down to make a table. I really wanted a bigger table just in case I had a big subject, but this worked out fine. The lighting was very difficult because I just had my bedroom lamp which was fine, but I needed a lamp that was flexible or at least an adjustable light stand. The clips I got were fine the kept the screen on the light to help not have the direct light on the objects.For the black background I used a foam board, and for the white background I used printing paper and a white box, which are not in the picture but I used them whenever I needed them. Also, I brought a car screen as a fill for the objects in the earlier assignments it worked and overall it was a great studio. 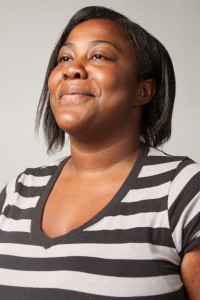 This is my favorite picture because the side light has a great and even tone on my face. The light highlights the facial features very nice and clean. The facial expression gives the composition a little bit of excitement or laughter.

We got to experience many beautiful exhibits, some being collective works and others dealing with strictly one photographer.  Even though a couple of them happened to be closed it was enjoyable. My favorite three would have to be: The Rectangular square exhibit at SepiaEye on 547w 27th st – This exhibit did not have just one photographer but instead a collective of many different works that followed the theme of Rectangular Squares by 16 artists. Along with framed pictures with borders there were also printed books with similar photographs on a table. The subject matter varied from people to buildings to random objects but all followed a rectangular theme. My favorite piece was Beatrice Pediconi, Seven, 2014. This was my favorite because of cool colors and beautiful symmetry. It gives me a sense of mystery. After reading the Gallery press I realized that they intended use of squares / rectangles was to impose a sense of strength, which i did feel when i viewed these images.

The photos in Stephen Shore’s exhibit consisted of  portraits and landscapes in the areas of Ukraine , Israel and the USA. My favorite image in his collection would have to be Wolf Street, Philadelphia, Pennsylvania. Although the subject matter was quite ordinary the way it’s framed makes it so much more interesting. The image is at eye level and perfectly symmetrical despite displaying numerous buildings. In his portraits Shore broadcasts numerous individuals including Holocaust survivors. His work focuses on portraying different cultures, he does it this by photographing not only the individuals but their surroundings including their homes giving them more depth. When i look at these photos I cant help but feel a bit melancholy but also a sense of compassion. When we know his intent, his work becomes much more meaningful.

This exhibit features landscape photography from photographer Ansel Adams. A majority of his photographs were taken in the mid 1900’s . I believe the time frame and the fact that Adams was an environmentalist gives us insight into his work.  He uses  existing lighting  to capture his images. His images are usually very sharp with everything in sight being in focus. A majority of his photographs also follow the rule of thirds despite being stricly landscape. I believe he focuses on portraying nature as beautiful and mysterious. I also noticed a handful of his work included tree photography. His images made me feel a sense of Power because of his use of contrast.

`On our adventurous trip through lower manhattan we visited many memorable exhibits. My favorite three are:

This particular gallery consists of a variety of photographers/photographs sharing the theme of rectangular squares.  This exhibit stood out to me because of the strong emphasis on geometry. These images were carefully framed and included borders. I believe this exhibit came off as very real, meaning it captured subjects doing everyday thing. Some portrayed all the geometry surrounding us. From people doing everyday tasks to the landscape photography that managed to capture everyday surroundings so elegantly, I believe this exhibit was successful. Most of these images manage to fill its rectangular frame giving a sense of fullness but yet containment because of the borders. If i did not read the press release I would not have known the reason behind their geometry based photography is that “The square, itself an ancient symbol of stability”.

This exhibit was also a group exhibit that I believe focused on capturing many different lifestyles. The importance in this exhibit was emotion. Whether the photo was evoking a message of power,sadness,happiness, etc it was done so beautifully.  The images had a way of making you feel as if you were there with that person witnessing everything going on around them. I believe the photographers attempts were very clear in this exhibit without reading the press release. The lighting adjusted in each image whether it side light, back light or diffused lighting.

Posted on December 19, 2014 by Leonardo Santana 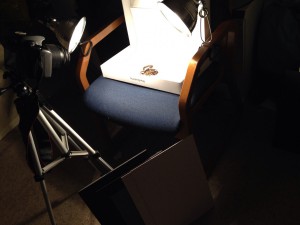 Well this is my DIY studio, specifically; this is my second one after having one complete failure. My first try on the home studio was not working as I wanted to work, in addition, I did not have a really good light source and a tripod in order to make my shoots. In this version of my home studio I used a computer box and I also have different cut outs of foam-core and presentation board of different colors. I placed on a chair in the middle of my room, because I really did not have a dedicated space for it, but at end I figured how to place the clamp lights and the tripod and the camera. It’s a little low and I feel uncomfortable at the beginning, but after I just started using the timer in the camera to avoid crouching in every shot. I plan to use it in the future for any projects that required product shot, its perfect for it and can play around with the lighting and the contrast using the camera settings.

This was my favorite image from the shoot in class. This image gives a perfect sense of balance. I also like how we managed to capture the shadow as well. This is also a good eye level angle.I also enjoy the gradient feel this image presents. 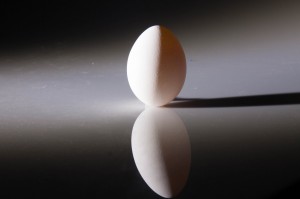