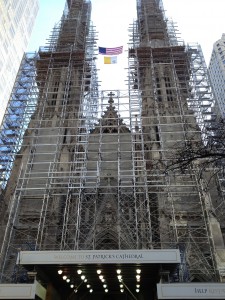 Saint Patrick’s Cathedral is a Neo- Gothic church designed by the architect, James Renwick Junior. This cathedral is located at 5th Avenue and 50th Street, Manhattan, New York City. The construction of this church lasted from 1858 to 1878. The reason of this project was to replace the old Saint Patrick’s. The cathedral is currently active and undergoing a major restoration (First and last photographs). Some classic architectural features can be found at Saint Patrick’s which are stained glasses, ribbed arches, cluster columns, etc. In 1976, it was declared National Historic Landmark (“St. Patrick’s Cathedral, Lady Chapel, Rectory, and Cardinal’s Residence”.).

In this text, I will describe, narrate and, importantly, criticize St. Patrick’s Cathedral in the following approach: (a) Formal, a visual description of the building; (b) Experiential, how this church makes me feel about it and my thoughts on it; (c) Historical, a contrast between buildings that were constructed in different period of time and the influence of the architect’s career in the buildings; and (d) Activist, is the building successful? This approach primarily targets how successful the building is in terms of purpose and, of course, use. 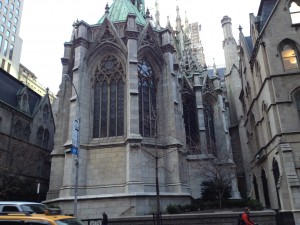 Normally, passengers or visitors will read a building from the façade to the rear elevation. Unfortunately, I was not able to do so because of the recent restoration of the cathedral that pretty much obstructed my reading of it. However I was able to have a view of the façade after walking up to the 5thavenue. One strange feature of this ancient architecture piece is the elevator-looking front door. Despite of it, as my eyes move upward I managed to experience more Gothic style features such as the pointed arches, buttress piers, and more details of ribbed arches and also the spires which are hard to have a clear view, especially the pinnacles, because of the cathedral’s height. In the back elevation, I noticed a semi-circular dome that resembles a Roman dome (circular). 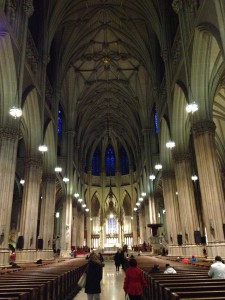 As I witness the interior design of the church, my first priority was to find Gothic style features. First, I stood in the middle of nave to have a clear picture of what I was looking for. On both sides of the nave, I could see sculptures of Saints. From the point I was reading left to right, I could see most of the fancy Gothic designs. The ribbed vault was absolutely beautiful. The vault design blends perfectly with the pointed arches because every detail of it is spiky. Since the ribbed arches are design in a way that each course goes a bit beyond the others, the columns are a perfect touch because they are composed of several small ones put together. This is the reason they are called Cluster Columns. There is one more feature and cannot be missed that is the stained glasses. As I walked through the cathedral, my eyes could not move off from those colorful and painted glasses. They were so sharply produced and maintained that always can get one’s attention. 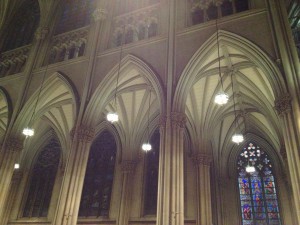 According to History of St. Patrick’s cathedral by John Murphy Farley, he states “The interior of the Cathedral, like its exterior, is cruciform….” (p.161, 2). I really agree with him because the cruciform is a feature that I was also looking for when I was having a tour in the cathedral. I have to be honest that it was a feature that I noticed with extreme attention. I believe that a normal tourist would not even notice it because he/she will be mostly focused on attractive cluster columns, ribbed vaults and stained glasses. Also, Farley greatly emphasizes on the cluster columns as “ornamented with beautiful foliated capitals” (p.162, 1). It is undeniable that St. Patrick’s Cathedral is a masterpiece of Gothic architecture.

I always like the ancient architecture. It is not because of inspiration but the design and amount of work and years to construct a building. St. Patrick’s Cathedral makes me feel like witnessing a lost art. Nowadays, buildings or structures such as St. Patrick’s are becoming scarce. That’s the reason it gives me the notion of excitement and accomplishment when I stood in front of its façade. 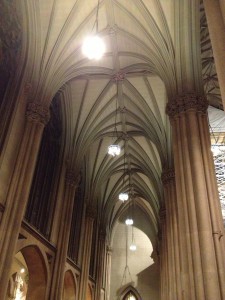 Before I went to visit the cathedral, I already have seen a couple of photographs of it. The moment I saw the photos, I was amazed how beautifully it was built and the way it was design. From I have studied about history of architecture, the Gothic is one of the most complex looking styles in history. The symmetry of it with the amount of details and decorations, I can feel the hard work that workers put on it.

From the façade, I have a feeling that this ancient designed building can be described as modernism because of its static look. Not only that, but the height is also a contribution to this concept. It is also common sense that the height is related God that it tries to reach His glory. If you have not realized, the ribbed arches and any spiky details are pointing upwards to the sky to emphasize and make the believers feel closer to God.

The moment I entered the cathedral, I felt I was being transported to the past because I never witnessed such a design and decorations. The sizes of the columns and glasses almost made me think as a mini guy. The scale of this cathedral can really make people feel being dominated. But my most meaningful experience with this building is the high quality level of abstract art it presents and how it makes me interpret that architecture can be more than just shape and proportion. 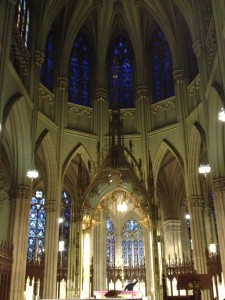 According to Smithsonian Institution Archives, James Renwick style was influenced by his engineering background. Having a good understanding of structural support is a key to build a massive scaled edifice. Renwick has won a couple of design competitions and worked on Gothic style buildings using by his knowledge of architectural history. St. Patrick’s Cathedral is the finest achievement of Renwick. Since he had so much experience on Gothic style, Renwick tweaked the cathedral’s design a bit by using a mixture of German, French and English Gothic architecture(http://siarchives.si.edu/history/exhibits/documents/renwickdrawing.htm, 4).

St. Patrick’s cathedral is a great inspiration for skyscraper designers at the time it was constructed. In the late 18th century, there were not so many buildings at the scale of St. Patrick’s. If you compare those modern skyscrapers around the cathedral, you can tell that they seem to have about the same height. Especially the commercial building next to the church is a perfect example of scale comparison (left skyscraper, looking at the façade).

If we compare modernism and ancient architecture, there is no doubt that the ancient styled buildings are more artistic and decorated. As time goes by, architecture has suffered a big evolution from complex decorations to simple-looking buildings. The difference that I have noticed between the two is, designers from the past focused more on decorating every single piece of the house from the very entry way to the roof. Meanwhile, modern architects express their design by the overall shape of the house. 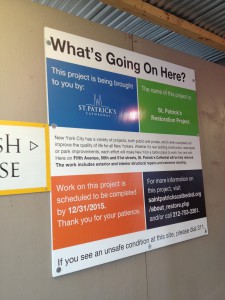 As the National Historic Landmark Program states, St. Patrick is “is the first large-scale Medieval-style church in America. Begun in 1858, its spires were completed in 1888”(1). This cathedral is a great importance for The United States and mostly for the believers. This church served its purpose providing homes for those lost souls and also became a place for tourists.

It will be insulting to remove such a church that was “paid for not only by the contributions of thousands of poor immigrants but also by the largesse of 103 prominent citizens who pledged $1,000 each”(http://www.saintpatrickscathedral.org/about_history.php, 1). This is a project where many people with different background contributed to create this landmark. I, sometimes, consider this cathedral as the people’s house.

According to Farley, St. Patrick’s appeared in newspaper with the following tittle “the noblest temple ever rose in any land to the memory of Saint Patrick, and as the glory of Catholic America”(P.131, 1). Not so many brand-new buildings are published and exalted in this way. Especially the tone of it is completely unseen and unheard. The tone of this tittle is victorious and patriotic.

In essence, St. Patrick’s cathedral is a wonderful place that represents the Gothic architecture. It revives the most precious and fundamental elements such as the ribbed arches and buttress piers. Without the invention of these features, people would not understand the significance of how to scale a building by using ideas extracted from them. This is because the ribbed arches can achieve significant height while the buttress piers hold the building up. What if these Gothic features never existed? Would the people be very concerned about it?

This research uses data from an organization that belongs to the church itself. It is also the official website of Saint Patrick’s Cathedral. This information describes the history of Saint Patrick’s and how contributions were a factor that it exists.

This book uses data from the “Society for the propagation of the Faith” which is an international association for prayers, catholic priests, etc. This book describes in full details of the design and history of the church along with the architect’s biography.

This is a CBS News source which is truly reliable because of its popularity. The news describes a plan that will put Saint Patrick’s Cathedral in major restoration. Not only that, but several architectural features will be added as well.

This is an educational source that fully describes in details of James Renwick’s life and career. It also has a sketch of a castle made by Renwick.

This is a document proving that St. Patrick’s Cathedral is declared as a History Landmark.

This is a governmental website proving information about St. Patrick’s significance to America.