Rockefeller Center: What Does a Skyscraper Mean to You?

My own experiences at lead me to believe that this structure is a bit more idiosyncratic over other skyscraping structures. In my early childhood, I would visit the Rockefeller Center every June, October, November, and December. My favorite time was in December because the Rockefeller Center was absolutely celestial during the holidays and I was always able to entice my parents into taking my sister and me there. When I visited other structures such as the empire state building the only thought that I felt were aesthetic and historic. As I approached the Rockefeller Center I felt and endless amount of thoughts like pulchritudinous, miscellaneous, and harmonious. The Rockefeller center is a prime example of a truly unique skyscraper. In James Murray‘s work The Architect and the Skyscraper he states that a skyscraper “is anything that makes you stop, stand, crane your neck back, and look up (3). Skyscrapers have that characteristic but what about the senses that you feel or what happens to you as you approach this structure? Is it a structure that plays with your mind or is just an extremely tall structure that looks the meet a city’s zoning limit? Zoning gave each city a different stereotypical skyscraper making each city look unique (4). In 1916, New York changed the way its skyscrapers would look for good by passing its first zoning limit (9). The zoning law forced cities to build structures to a certain height. The Rockefeller Center doesn’t need to be a skyscraper to look aesthetic but zoning laws limit and take away what a structure can develop into. For example, a structure that exceeds the zoning limits is Burj Dubai in Dubai. It developed into a very complex structure because it exceeded the zoning limits.  Murray said “New York made people think of skyscrapers as prestigious but in fact shorter building can have just as much impact” (21). The Rockefeller Center isn’t the tallest structure in the world but it captures the essence of a skyscraper and even more because it attracts people from the different parts of the world and its public relations draw publicity.

Skyscrapers have become a accustomed to people throughout the world. Even though the Rockefeller Center was one of America’s oldest skyscrapers and being that America was the first country to start the era of skyscraping other countries have created structures that can match the effectiveness of skyscraper here in America. In the novel Skyscrapers of the Future by Carlo Aiello, Aiello allows journalist to talk about different skyscrapers in different countries. Two of the journalists were Brian Ahmes and Chad Porter; they were talking about one of the most statuesque in Southern Asia the “Grand Metropolis.” Much like the Rockefeller Center the Grand Metropolis serves as center Piece in Asia. It also is a site that attracts an endless amount of tourist and brings in plenty of money due to its complexity. This structure also brings in different thoughts and characteristics that make an “out of the box” project. Ahmes and Porter said “at first glance, this tower echoes a typical building in its constructional phase (22)”.  This is what makes the structure unique if it is able to affect your senses and you can appreciate the building in a way that makes it feel more than just some everyday structure. Further down Ahmes and Porter said “moving up the tower’s podium, exposed detailed sections reveal overlapping floors and roofs from above and below (22)”. Some structure don’t really affect like their supposed to but this one peculiar building brings a sense of imagery. When I look at the Grand Metropolis its looks like a Twizzler that’s standing on its own and that is structure that is worth preserving.

The head leading architect for this edifice is Raymond Hood. Hood was already famous in the world of architecture: previously he along with his peers constructed the Chicago Tribune Tower and the American Radiator Building, Mcgraw-Hill Building, and the Daily News Building. Hood was a brilliant architect and solidified his name in American architecture because he and the other architects like Wallace Harrison not only created a structure that is beloved by America. Hood worked mostly in Art-Deco style and was a student at MIT an Ecole des Beaux-Arts in Paris. In the library journal news article in August 1982, there was a small section on Raymond Hood. The article said hood captured and had a big contribution on metropolitan culture back in the 1920’s. During that time Hood was a part of a competition in making the best tribune tower which he had won.

This is a picture of Hood’s sketches and this is his thought process of one of his structures till he reached phase 3 where he was satisfied with what he drew. Hood loved towers it was no surprise that he was the head leader of the Rockefeller Center project. He had different techniques that separated him from the pack of architect during his time. He had a theory on limiting the amount of volume based on the frontage of the streets. His theory turned out to be a huge success this allowed rentable space, more light and air for the tower’s occupants and plenty of street space for the public. Hood wasn’t just an architect he was a true visionary. 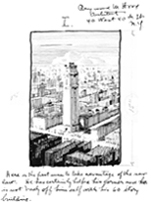 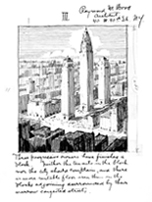 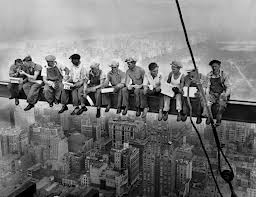