Posted on December 19, 2012 by Williams.Guerrier

Controversy Within The Barclays Center

There are many ways in which a building or landmark can be criticized, but there are four modes of Architectural criticisms that are often used throughout all judgments that are passed. These four modes of criticisms are the historical, experiential, formal and activist criticisms.  The Barclays Center, a recently completed building in Brooklyn, NY with its completion has brought along with it some great value in being that it is a landmark for the sports society and probably contains the ability to one day become a historical landmark for a variety of other reasons. Very much controversy as well as excitement also came along with the new arena. As we may know The Barclays Center is here to serve various purposes in which all bring satisfaction to the people coming to watch all the events. The Brooklyn Nets a part of the National Basketball Association has recently been relocated to the densely populated Brooklyn area. The team is set to play in the new stadium and will allow fans coming in from many different parts of the Metropolitan area to come watch their favorite team play while also observing the brand new stadium itself and reasons to why it has been such a long project.

The Barclays Center was originally set to be opened since way back in 2006 but plans changed due to the lack of money at the time and also to claims on eminent domain, not being able to use private property for public use. Bruce Ratner part of Forest City Enterprises the original owner of the Nets since 2004 had these plans sought out for a while until these controversial issues came about and placed the project on halt for a couple of years. A $100 million bid was put up for possession of the private land which the arena was planned to be built on but until issues were resolved nothing would be able to happen. In 2009 the New York Court of Appeals came in favor of Bruce Ratner’s plan and gave him the rights to use the property for the Barclays Center. The Completion of the arena was successfully reached on January of 2012 and later on to be opened in September for the grand opening with its first concert being held by famous hip-hop artist Jay-Z.

In the beginning there were a whole lot of controversial issues concerning the area chosen for the center to be built. Downtown Atlantic Avenue also near the Flatbush area was a place many people lived and went about their daily duties. The area in which many trains such as the 2,3,4,5,B,D,N,Q,R and even the Long Island Rail Road pass through was a brilliant choice allowing people to come from basically any part of New York City to come watch as a masterpiece takes its place in society. Once the construction was ready to get started people had to move out the area, of course at first may not have left many too thrilled. The area chosen may have been great for income but still doesn’t mean there were wrongs being done as well. We all know there were in fact many tenants living in the area. A lot of them were most likely shocked to find out that they had to give up their homes. There was also a homeless shelter in the area which had to be moved probably leaving some without a place to stay for a while. The Barclays center was a very disruptive project but I guess you can say people got used to the making of a new entertainment spot. Even with having bothered many at the end people seemed to enjoy the entertainment brought by the stadium maybe even more than expected. After its completion the center appeared to be a great success in that it had its purpose and it served and continuing to serve it well. The main role it plays is to have fans comfortably and happily watch the Brooklyn Nets play and it has been doing just that. Hosting the Nets isn’t the only purpose that the Barclays Center serves. The fully up and running Barclays Center is home to The Brooklyn Nets and The New York Islanders while being a spot held for concerts and other sporting events as well. The Concert held by Jay-Z was one many people looked forward to. Its multipurpose use brings about a great deal of income for the owners and people associated with what the center produces.

According to a New York Time’s article posted on September 29, 2012, people believe the creation of the Stadium has to be one of the greatest events to take place in Brooklyn in a long time. It’s about time people in Brooklyn received a gift. Inhabitants of the Brooklyn borough believe that this move of the Nets to the Barclays Center is in fact history in the making. The Nets are said to be the first team in more than half a century to come and represent Brooklyn according to the article, and for that the Brooklyn residents are all extremely proud and excited while wondering what more is there to come. The impact this long awaited arena has on the community is one to be considered extraordinary in that for a long time there hasn’t really been anything to get the folks as excited as they are now. Though again many people had to move out from their homes, the people were still waiting for this big event to come and even described it as if they were waiting for a hurricane due to the magnitude of excitement. The attraction of cabs at the downtown area is also another plus being given by the opening of the Barclays Center. On the other hand, another article from the International Business Times showed people against the whole project blaming and criticizing Bruce Ratner for what they see him as being dishonest. According to this article Ratner promised more jobs and affordable housing to come along with the newly built arena. People weren’t seeing things as they wanted so decided to complain that the arena was just basically a waste of money and believing that they were robbed of their property. In the article one man was even mentioned to go about taking his own actions. Dan Goldstein one of the local residents decided to protest against the project by refusing to move out of his home which was on top of the newly owned property. Issues as such on the Barclays Center may just as so continue to pile up until changes are seen by the people.

The add-on of a new Arena could normally and simply be defined as a blessing for most. That of course wasn’t the case when the Barclay’s Center was completed. Some would say that the creation of the Barclays Center has become a burden upon the city in that it is just here to cause a loss of money and take up space. Others may see it as a gift. Though many things have been replaced or removed we can still see bright side of things from the arena. People come to watch their favorite teams play and that sole purpose gives us reason to believe that this new arena is truly a beautiful thing. Everything from the extravagant events being held to the sharp design of the arena can only give us New Yorkers and insight to what true succession really is. Not enough good has come to the people of Brooklyn but this new arena in town has been enough to patch up a lot of what’s missing. Reading articles and seeing pictures may show some of what is going on inside or in cause of the arena, but that isn’t enough. Although not really being a Brooklyn Nets fan and all I myself being a Brooklyn resident is looking forward to seeing up close and personal what the Barclays Center really has to offer. 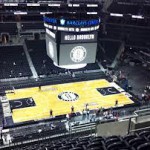 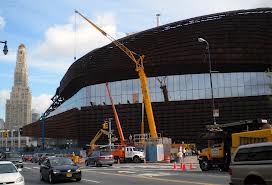 The Barclays Center construction right before its completion