On March 16th, 2016 my Graphic Design Principles I class went on a field trip to The Brooklyn Museum. Located at 200 Eastern Parkway near Prospect Park. Our Professor, Ms. Trofimova instructed us that we would explore the African American exhibit on the first floor and the “I See Myself In You” exhibits as a class. While taking breaks for every students to explore those exhibits by themselves. And then after those exhibits were finished being looked through. She would let’s walk free and go home whenever we were ready. Personally, I had Raster and Vector after Graphic Design Principles I. So I was heading back to the school after exploring what I need for my essay.   Professor Trofimova explained that the African American exhibit was about establishing power and dominance. Her favorite piece where these sets of hanging keys in behind a glass frame. Each key had distinctive design that were constructed to look similar but have differentiation. The piece that worked for me in the African American exhibit was called, “ Beaded Crown ( Ade ) of Onijagbo Obasoro Alowolodu, Ogoga of Ikere” createdin the late 19th century. And “ Beaded Crown ( Orikogbofo ) created in the 20th century. This piece worked for me, because the color were vibrate That is what attracted me to the piece in the first place. Then the detail of repetition using the beads over the cloth and fiber yarn. And the size of the piece was appealing. It was almost the height of a average-size human being. After the African American exhibit, our Professor lead us to the fourth floor. Where the “I See Myself In You” exhibit. The first piece of the exhibit was five statues of a African American queen in five shades of brown, from lightest to darkest; left to right. That piece caught everyone’s eye, because it’s a piece known famously on the internet; usually on Tumblr. Our Professor explained that people are drawn to it, because of the repetition with variation aspect. One of the two aspects of Graphic Design Principles and part of the Gestalt Principles. The piece that worked for me in the “ I See Myself In You” exhibit was the piece called, “ Scandinavian Modernism Mirrored and Reflected Infinitely” created by Josiah McElheny in 2005. The piece uses chrome metal, hand-blown mirrored glass objects, wood lighting and transparent and industrial mirror. The piece is seven hand-blown glasses standing side-by-side. And the mirror in the back while having the wood light shining on them. Create this effect as if the seven bottles are being multiplied and moved all at the sametime. So instead of seeing just seven bottles, you see roughly around forty-five bottles. After finishing the “I See Myself In You” exhibit, Professor Trofimova told us to spend an extra twenty minutes or more exploring the rest of the museum. I walked around and found this section in the museum that had model houses behind glass frames. I was attracted to this section in the first place, because I love architecture. No matter how small or how huge. This piece worked for me, because when I took a picture of it. The picture looked realistic enough to be an actual painting and not a physical model. And he plants and details like aged wood and yellowish-green grass;  around the house and on the house made me visual a actual rural house in the country or upstate New York. All in all the field trip to the Brooklyn Museum was not that bad. The museum was less packed than it was the last time I visited it. I got see more exhibits than I did last time. Was able to talk about art a little more, that’s always a good thing. The African American exhibit was okay to me. I enjoyed the “I See Myself In You” exhibit better. And the model house section the best. 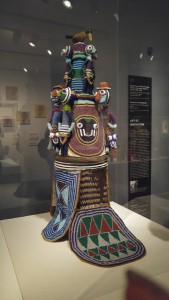 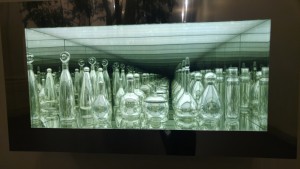 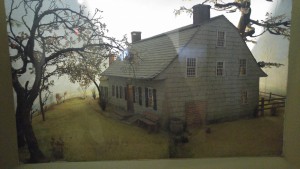