How are macromolecules assembled?

The common organic compounds of living organisms are carbohydrates, proteins, lipids, and nucleic acids. Each of these are macromolecules or polymers made of smaller subunits called monomers. The bonds between these subunits are formed by a process called dehydration synthesis. This process requires energy; a molecule of water is removed (dehydration) and a covalent bond is formed between the subunits. Because a new water molecule is formed, this is also referred to as condensation. The opposite where water and energy are used to break apart polymers into simpler monomers is called hydrolysis (hydro– water, lysis– to break or split).

Carbohydrates serve 2 major functions: energy and structure. As energy, they can be simple for fast utilization or complex for storage. Simple sugars are monomers called monosaccharides. These are readily taken into cells and used immediately for energy. The most important monosaccharide is glucose (C6H12O6), since it is the preferred energy source for cells. The conversion of this chemical into cellular energy can be described by the equation below:

Long polymers of carbohydrates are called polysaccharides and are not readily taken into cells for use as energy. These are used often for energy storage. Examples of energy storage molecules are: amylose or starch (plants) and glycogen (animals). Some polysaccharides are so long and complex that they are used for structure like cellulose in the cell walls of plants. Cellulose is very large and practically indigestible, making it unsuitable as a readily available energy source for cells. Monosaccharides contain a carbonyl group. The carbonyl is a source of electrons (the double bond on the oxygen). These electrons can be donated (or lost and oxidized) to reduce another compound (that gains those electrons).

Glucose is the preferred carbohydrate of cells. In solution, it can change from a linear chain to a ring.

Monosaccharides are capable of isomerizing. This means they alternate in structure from a linear chain to a ring form in solution. Cellulose is a complex carbohydrate of glucose molecules. It is the major structural component of plant cell walls. It’s structural durability is enhanced by intramolecular hydrogen bonds. 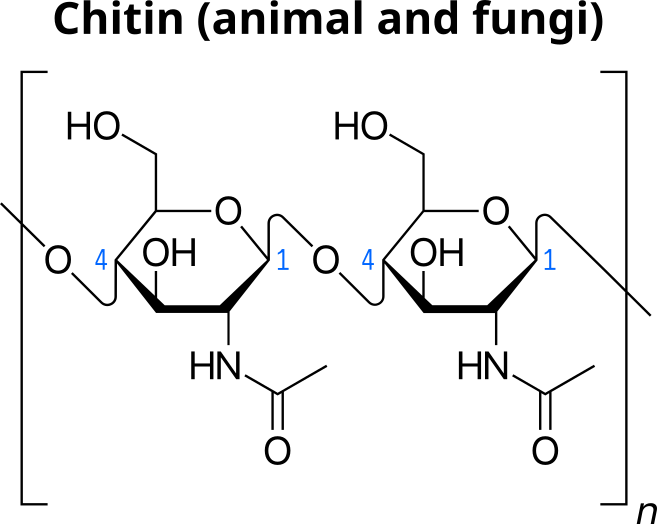 Chitin is a structural carbohydrate found in animal shells or fungi cell walls. The polymer contains amide groups that differentiates it from other carbohydrates composed of glucose.

A cicada molting from it’s shell made of chitin. 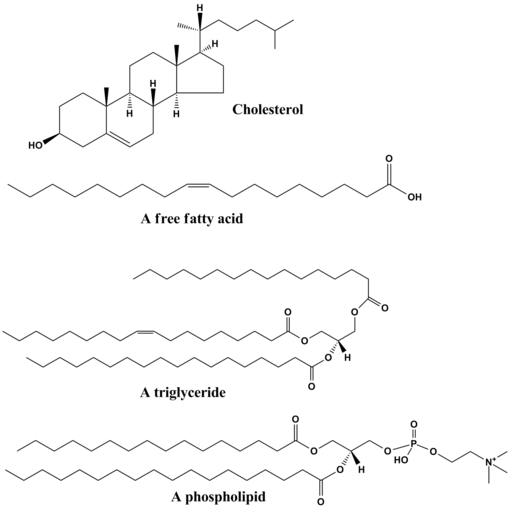 Fats or triglycerides are made of glycerol and three fatty acid chains. They form through 3 dehydration synthesis reactions between a hydroxyl of the glycerol and the carboxyl group of the fatty acid. Fatty acids tend to be chains of 16-18 carbons long.

A saturated fatty acid. The molecule takes up little space in three dimensions. Many molecules can stack upon each other. Saturated fats are solid at room temperature. 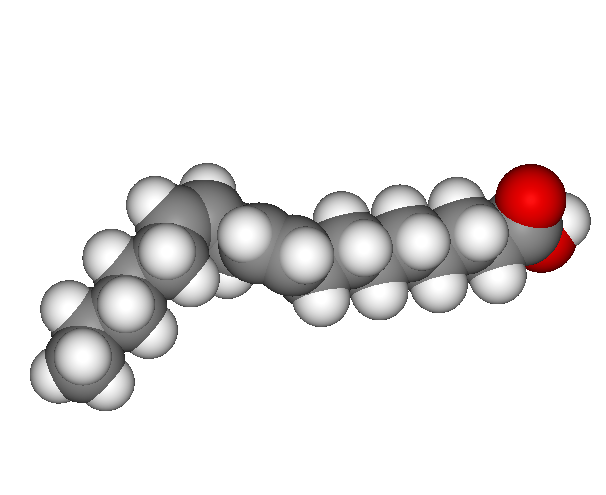 A polyunsaturated fatty acid. A kink from the double bond increases the amount of three dimensional space that the molecule fills. Unsaturated fats tend to be liquid at room temperature.

A trans fatty acid. Despite an unsaturated bond, the molecule fills as much space as a saturated fatty acid and is solid at room temperature. Trans fats usually arise from artificial saturation techniques. 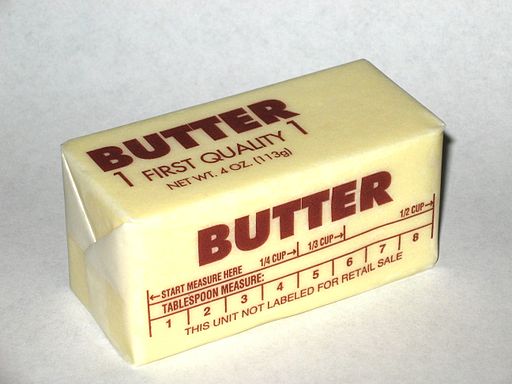 Because butterfat can stack together very closely, it is dense and found as a solid at room temperature. 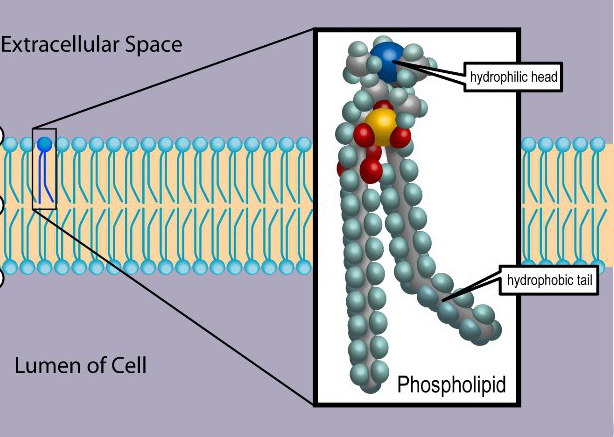 The structure of phospholipids in a cell membrane. Credit: Superscience71421 [CC-BY-SA-4.0]

Phospholipids contain the phosphate group attached to a glycerol and two fatty acid chains. The phosphate is negatively charged and will interact with polar compounds, like a water environment. The fatty acid chains appear as lipid tails and hide from the water. The act of having both a polar side and a non-polar side is called amphiphilic. Phospholipids are the major component of cell membranes and serve a structural function.