Created a scene in Unity and change the camera’s skybox for a
solid green color. Added a plane, a cube, a sphere and assign different materials to them. I’ve also added a few cylinders and other objects in the space to see what I can mis and match around.

Silver spoon is a wonderful anime where a middle school student decided to move from Toyko city to the countryside to an agriculture high school. Throughout the anime, there were many valuable lessons learned that kept it very entertaining to watch. Like how the main character struggles with the sudden new environment but with the strength and endurance he builds along the way, he gradually learned many valuable lessons. I really wish a 3rd season would come out but since this anime isn’t getting much traffic and attention; it’s unlikely a 3rd season will come out.

22/7 is a great music anime where a group of girls performs musicals and dances like idol groups. The plot started off with random girls from worldwide meeting each other for the first time and a group was randomly formed by a “god” orders. What makes it a great music anime is the typical plot of the team growing together and going through many obstacles and reaching the climax.

My Roommate is a cat is a fairly cute anime where you see a cat and a human interact. I don’t remember the whole detail about the anime since it’s been fairly long since I’ve watched it. But knowing my genre so far, it’s probably another heartwarming anime where the cat and the human live together and grow to understand each other.

Kono Oto Tomare is a great anime with beautiful instrument playing music and I love the story plot of the team member growing as a group to perform better together. It’s a mix of beautiful hard work, cooperation, the endurance of everyone in the team that makes this anime tearful and heartwarming.

A Unity tutorial that I have decided to pick up upon is 2D animation. Out of all the tutorials I looked into, this stands out to me because I have done animation before but they were all really based on manually editing. So when I found this Unity tutorial, I wanted to see if this was another convenient way of animating. Other reasons will be because I want to improve on my drawing skills and wanting to grasp a little bit more understanding of animation.

Throughout the process of this tutorial, I first had to draw a few characters with separate body parts, different layers, and try my best to make it look normal and good. I’m not the best artist but so my aim was towards it looking decent. After I made my first character, I hopped on Unity and started learning how to 2D animate.

I was stumped in the beginning as I have no boundaries, I was just putting my character in a blank space/skybox. So I decided to have a little bit more fun in making a little stage with some 3D assets being imported in. After making the room, it felt more like it. I had a space to work on and boundaries for me to know what my character is there for.

Then I finally started putting my character in the scene and I learnt a few tricks like using the sprite editor for 2D animations, how to change the pivot points of each part of the body, and keyframing my character.

After successfully animating my first character, I continued on to adding my second character with a little bit more body parts and I may have started to mess up some coloring & lining on the way so it may be pretty noticeable in some areas in the Unity recording video.

In conclusion, is animating in unity vs animating in editing software like Photoshop, krita, etc much easier? My answer would be yes for me, since I have limited experience in only animating in Krita & photoshop. I say that it was definitely more enjoyable being able to make a 3D room & animating 2D in the same space. It was much quicker and fun. When I first started animating in Krita I didn’t follow a tutorial or anything so that may be one reason why I find this much convenient.

May 3rd – May 6th: Completed the tutorial & documentation.

Week 11 we worked on a new Unity project with Agora.

First we created an account so we can obtain the App ID.

Next we went into the Unity project and we imported Agora video SDK from the package manager. We experimented around with the size and the scripts so it would work.

Advice for me: Remember to not just copy and paste the code, make sure to leave the mono-behavior public class in. Also, the Agora tutorial doesn’t mention this, but we have to add (using UnityEngine.UI;
using agora_gaming_rtc;) these 2 classes in the scripts. Add in the public class for the Join & Leave button so I can access them in the inspector.

Here is the end result of the Agora tutorial:

Here’s a short 20-30 second video of the Reaktion Demo: Click here to watch the video

During week 7, we have been given the museum assignment to chose a room and try to replicated it on Unity. We were working in a team of 2 and my partner is Justin. We chose the room of The halls of Reptiles and Amphibians to replicate on Unity.

Here’s the link to the room: The halls of Reptiles and Amphibians

We split up the work after we came back from spring break and my role is to make the level – the building design/outline.

Here’s the link to the rough sketch of the room before I started making it on Unity: Rough sketch

Here’s a video of the end of the week level product: Unity video

Things I could improve is that I could’ve added post-processing and adding floor texture material in the room. I will definitely add onto this project more in the future even after presentation day. If I do continue on this project, I will update it on Open lab to see future adjustment.

Week 6 we talked about AR & VR foundation. I’ve decided to experiment around with AR foundation in Unity. Here’s the mini tutorial for my future self.

Today’s reading is A Manifesto for cyborgs: Science, Technology, and Socialist Feminism in the 1980s by Donna Haraway. This reading was about a cyborg that is a hybrid of a machine and a sociable creature. It could be a animal/human. The cyborg is classify as a fiction that represents struggle over life & death. The reason why it struggle so much is because it’s being rejected by many that can’t accept something different than what they usually see. There is a category for everything and the cyborg a hybrid does not belong in any category. This story, the cyborg is to persuade feminist to move on and that categories are not needed to separate things.

In my 2120 project, today in Unity I added a few scripts that assigned a different material to my rocks.

Here is my flowchart:

Here is a unity recording of the scripting changes: 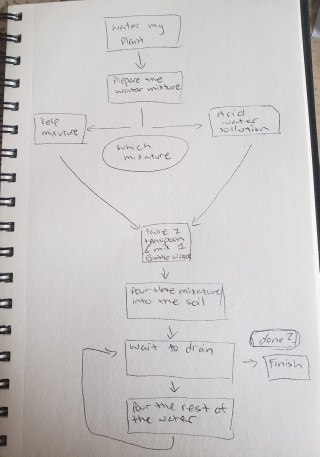 In today’s class, the exercise was to map out what I do daily. Though I don’t water my plant daily, it’s mostly a weekly/bi-weekly activity I do. This is a rough sketch & I had a many more ideas.

Before I started working on my flowchart, this is what I’ve typed out.

Watering my plant (How I water plant)

Another step I would do:

If I had more time, I may have map out most of the ideas I first typed out but a simple flowchart will be fine for now.

The idea was to have a rock and a single tree from a friend of mine as a joke. I was like sure, I will implement that idea in and play around with it.

I thoroughly enjoyed playing around with the scenes & adding layers of things. It took me a good 8 hours or more making this project. I was watching Professor’s Alecz video and following it step by step. Most of the time I had to pause & make sure I did it correctly or he went just a little bit too fast. I probably could have spent lesser time to do this project because I had distractions at home. Thought those distractions where the motivations I needed to start the project & continue on. It’s easy to get lost in the moment when working on projects but it’s also the start we have to take that takes a while.

The problem I had with unity was my terrain kept clipping whenever I zoomed into the terrain but that was fixed by changing my layout to 2 by 3. Another problem was I couldn’t install the unity recorder but that was because I didn’t update my unity to the latest version. Lastly, I couldn’t figure out how to make the tree leaves flow with the wind unlike the grass on the ground.

In the end, I made a terrain I’m pretty happy with and I’m looking forward to scripting next week.

Video of my terrain(video was too big to import as media here): https://drive.google.com/file/d/1BhgjdQRTIWm585FpcpysB2GDl_9kImoV/view?usp=sharing

Here’s a link to a screenshot to the unity layout 2 by 3 in unity: https://drive.google.com/file/d/1ZHZd-kh_4nyfA8ML0Dk0SLsVUMtQXDH1/view?usp=sharing

This week’s reading was The Ignorant Schoolmaster written by Rahul Mukhopadhyay & Varadarajan Narayanan. Base on the title without reading the content yet, I believe this story would be related with boundaries between the possibility of professors and students. Base on the story, there was a debate about access to education because of social status. A quote that stood out to me was “Who has the right to think” (Ross, 1991, p.58) because during this time only privileged children get an education while those of a lower class do not have the opportunity to attend. As the story progress, they mention that it is possible for an ignorant person to teach another person what the former does not know & what is important is that the student understands the message given by the instructor. The teacher will give explanations to the students but for the teacher to truly know if the students received the knowledge, the students have to respond back to what they understood.  Though this reading was confusing for me, I get that the message is trying to give is that there’s no need for inequality in education and that teachers and students can have equal standing. We are learning together as a team.