2: of, relating to, or involving the entire world : worldwide

; also : of or relating to a celestial body (such as the moon)

3: of, relating to, or applying to a whole (such as a mathematical function or a computer program) : universal

1: characterized by or relating to position in space : having a definite spatial form or location

3: primarily serving the needs of a particular limited district: making all the stops on a route

4: involving or affecting only a restricted part of the organism : topical

5: : of or relating to telephone communication within a specified area

Global:  The term global can be used to talk about the idea of something expanding as a whole  all over the world or a certain group. For example technology, businesses and even social media trends have been spread throughout the whole world.

Local: The term local can be can use it when they are around their neighborhood or within that area. For example, Ally visits the local store. Another way to explain local can be something around you or close by where you live.

The terms “global” and “local” can relate to the Latino Community because when someone is coming from another country to live in a place they’ve never been to before, they tend to find a community or an area that makes them feel like they’re back in their country.  For example when they were in back in their country, there would be people speaking the language they speak or let’s say they celebrate a certain day no one else does, they would most likely try to find that comfort zone. These little details can be global because it was originally from a different country and only certain people share those same connections. It can also be local because it’s close to where they live so they have easy access to it.

An example of this idea is when my parents decided to move to the U.S. together, they had certain conditions that they wanted in their new community.  Some of the things that were important to them was to look for places that have restaurants that serve foods that come from Dominican Republic, a corner store in case they run out of coffee, and most importantly they wanted to live near people that spoke Spanish.  They needed to be able to communicate with others who spoke Spanish while they were learning English.

Another way global and local can relate to the Latino community is when someone owns a business and would like to expand it by traveling to different countries.  If you expand your business to where Latinos are, you can market your items and sell them. For example in Dominican Republic when you’re out on the streets, you see all sorts of vendors: Icee vendors, vendors that sell fresh and seasoned mangos, vendors that sell empanadas, and other types of handheld delicacies. Where I live you can see those same vendors trying to sell their items. Also, when opening a new restaurant and you want your menu to be different types of Latino foods, your location would most likely be a local neighborhood where there are more Latinos. Why? Well when opening those types of restaurants or selling those items doing so near a Latino community can cause you to have more customers and your business to be more successful since you have people that recognize those types of foods and items.

Part IV– These two pictures show how the community changes words to Spanish so that people can understand directions and where they are and they also have business signs up both in Spanish and English. 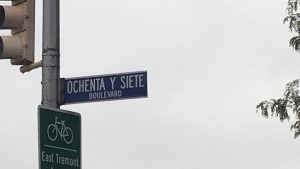 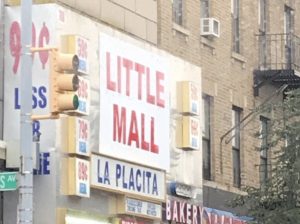 PART 2
Global
In my own words, “global” is when people means something related to other regions of the world not only the United States, some words like worldwide or international are used with the word “global”.
Local
The word “local”, means a particular area that is familiar to us, another example could be persons being from a particular area.

PART 3
New York City is a popular city contains many different cultures and languages, because over millions of people came into the New York City, from many other countries or states. And New York City’s immigrant history also had a great influence on its global food culture, many immigrant brought their cuisine to the city, such as chinese cuisine, italian cuisine and eastern european cuisine. Nowadays, there are many different restaurant throughout the city, global cuisines are being served to local.

In the community of the kitchen that i am working in, we serve traditional vietnamese food to locals in the city, we brought in most of our ingredient from supplier, but not all of the ingredient were produced in the states, such as spices, rice, and rice noodle, these ingredient were probably produced in Asia then transport into the city. And we also brought in vegetables and meats from local supplier, fresh vegetables and meats were delivered to the kitchen everyday, we use fresh local ingredient to cook, then serve great vietnamese traditional cuisine back to locals.

In the restaurant that i am working in, the restaurant is running by a vietnamese family, they were immigrated to the U.S in 90s, they also brought in their cuisine for the locals. When there were many people came in to the U.S, many cuisine were brought into the city, that is the time when global cuisine start to take over the city.

Nowadays, people in the city are willing to try different cuisine form the world, and most of them enjoy the food. Global cuisine had already became the most trending and majority food selection in the city. In conclusion, “global” and “local”, are connect to my community in the way, how global cuisine serve to local customer. 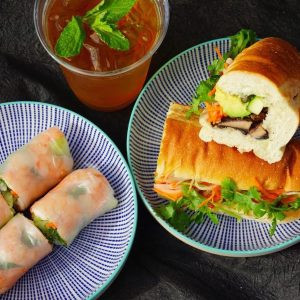