Cultural Capital is the accumulation of knowledge, behaviors, and skills that one can tap into to demonstrate one’s cultural competence, and thus one’s social status or standing in society.

Cultural Capital is a term developed and popularized by late-twentieth-century French sociologist Pierre Bourdieu. Bourdieu first used the term in written work with Jean-Claude Passeron in 1973 then further developed it as a theoretical concept and tool of analysis in his landmark study Distinction: A Social Critique of the Judgement of Taste, published in 1979.

Cultural Capital is the accumulation of knowledge, behaviors, and skills that one can tap into to demonstrate one’s cultural competence, and thus one’s social status or standing in society. In their initial writing on the topic, Bourdieu and Passeron asserted that this accumulation was used to reinforce class differences, as historically and very much still today, different groups of people have access to different sources and forms of knowledge, depending on other variables like race, class, gender, sexuality, ethnicity, nationality, religion, and even age.

Cultural Capital is when individuals have certain skills and knowledge that help them in society. This can be a simple task like knowing how to write a proper email to a teacher. As mentioned Cultural Capital is when one someone knows how to do something someone else might not know how to do. Culture Capital is affected by many different variables such as gender, race, ethnicity, and many other things. People of all ages benefit from some sort of Cultural Capital in their day to day lives without them knowing about it.

In the Latino community, many of us face many disadvantages compared to other ethnicities. We the Latino community face Cultural Capital on a daily basis simply because of the where we come from/live, the language we may speak, and the color of our skin. This is an example of Cultural Capital because all of these variables help place us at a disadvantage from other ethnicities. I am apart of this community because I myself am a Latino from Harlem who is surrounded with others who look and speak just like me and face the same obstacles I do.

In the Latino community, some of our parents did not get to achieve a higher education past high school because of this Latino students are placed at a disadvantage from the average white student whose family attended college. This is Cultural Capital due to the fact that the white family has attended college the next family member who attends college will now have resources and prior knowledge that will help them have a smoother college experience.  The Latino student whose a first-generation college student will not know what to do when walking into a college because his family did not attend leaving this student with no prior knowledge or resources that could have helped his or her college experience. Unfortunately, in the Latino community kids who are born outside of the U.S. are placed at a disadvantage in school. These kids do not speak English fluently and are placed in classes to help them learn the English language. These students are placed in classes called ESL (English as a second language). The Cultural Capital of an ESL student is they come from a household where both parents speak fluent Spanish vs. a student from the U.S. who comes from a fluent English speaking family. ESL students are also held at a lower standard due to the fact that they do not speak English language fluently creating the assumption that they are not well educated. In the Latino community, we also face lots of trouble finding jobs. For undocumented Latino families in my community finding jobs that will pay them minimum wage is hard because of the limited job opportunities that are available to them. The providers of these families usually suffer financial instability because they work off the books. The Cultural Capital of this is a person who is from the U.S. speaks English, has working papers and a social security number making it easier for them to get a job and making it more likely for them to get hired for a higher paying job. An undocumented person who does not speak English does not have working papers and does not have a social security number makes it harder for them to find a job and leads them to work for less than minimum wage placing them at a disadvantage for new job opportunities.

This image is an example of Culture Capital. This image demonstrates the example of the white family who attended college vs. the Latino family who did not attend college. The family on the left has gone to college and has prior knowledge on how to get through college passing it onto their child. This means the child on the left will get through college easier because of all the knowledge given to him by his parents. The family on the right has not attended college in the past meaning they have no prior knowledge about college. The child on the right is a first-generation college student going into college with no prior knowledge about the ins and outs of college making his college experience a challenge for him and leaving him having to figure everything out on this own in order to succeed. 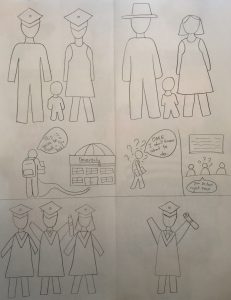