1 : The monetary worth of something : market price

2 : A fair return or equivalent in goods, services, or money for something exchanged

3 : Relative worth, utility, or importance a good value at the price the value of base stealing in baseball had nothing of value to say

4 : Something (such as a principle or quality) intrinsically valuable or desirable

5 : A numerical quantity that is assigned or is determined by calculation or measurement let x take on positive values a value for the age of the earth

6 : The relative duration of a musical note

7 : A relative lightness or darkness of a color : luminosity

b : The relation of one part in a picture to another with respect to lightness and darkness

William camps out for the Supreme Box Logo sweatshirt on Tuesday even though the store opens on Thursday. He plans to buy it for $168 USD and sell it to William at a higher price to pay for his college tuition. William and his buyer are in the buying and selling community mixed in with the street wear community. These two communities started in major cities by skateboarding teenagers to express themselves while creating goods for other fellow skaters to enjoy. Now the small group has expanded and meshed with the internet allowing for many teenagers around the world not being limited to their own towns. Growing up inside this community allowed for me to be exposed to great works of art in different mediums while learning the means to hustle; buying clothes to sell.

As an edgy teen infatuated with hip hop,rock music and skateboarding, the clothing represent the us. The brands that represent the forefront of the culture created unique garments from shirts with bands to simple logos; Supreme is the most relevant brand to date causing their spotlight to shine past their once skateboard oriented crowd to a more wealthy suburban teenager. During the fifth grade, I skated daily with my friends having so called “seshes”. In these seshes it went beyond just skateboarding as we descended deeper into the culture leading us to the discover of Supreme. It was a match made in heaven as we all valued the output of creative collaborations relating to popular culture and their own designs; The classic box logo. These pieces that we loved because of skateboarding mixed in with the other random things we enjoyed became a trend. The community that was once weird people that were into specifically weird things evolved into people trying to validate themselves with Supreme. The price of their pieces most notably the staple box logo jumped ten folds to a point buying it became a complex process. Online purchasing is now close to impossible unless you have a fiber optic internet service because pieces sellout in under thirty seconds. While purchasing in person involves an online lottery on Monday at around ten in the morning, in which you might be selected to attend the release on Thursday at a certain time and store. Back when I was fond of Supreme, The lottery system was not created and so people would sacrifice a week to camp outside the store to buy something usually to sell. I was surprisingly lucky enough to buy a box logo sweatshirt in my junior year of high school and I cherished it. Funny enough, after all of the struggle to obtain the sweatshirt to wear, I sold it. I made six hundred dollars. The brand I valued so highly for their impact on the skateboard culture to their amazing taste in different mediums is still present with me. But, my friends and I realized other people value it as being cooler than everyone else who does not wear Supreme. We cannot stand for this and sadly it became that a of a pissing contest. We outgrew Supreme but, we still appreciate it as it made us a lot of money. 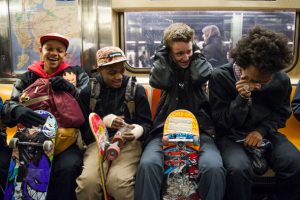