When faced with the decision as which winery to visit, Brotherhood was the easiest choice. Brotherhood, touted as the oldest American oldest Winery which was established in 1839. Brotherhood is located in the Hudson Valley AVA and is just a hour and a half ride outside of New York City.

On the day that I visited Brotherhood, I went with a friend. It was a beautiful spring day when we embarked on our journey which started at Port Authority in Manhattan where we took a bus to the Town of Monroe where we then took a cab to Washingtonville where the winery is located.

On arrival at the winery, it was peaceful and tranquil. We were wondering around the winery in search of the main office so that we could get some information on where we should go. We were aimlessly walking until we finally found someone who worked there and pointed us in the right direction.

As soon as we entered the main office, someone greeted us and asked if we needed help.  We informed her that we were indeed in need of help and asked her where we could participate in a tour of the winery.  She helped us with the purchasing of our tickets for the tour of the winery as well as for the tasting. A few minutes later, the tour was underway.

At the beginning of the tour of the cellar, one of the first questions I asked was “Are the grapes used in your wines grown on the property?” to this he replied no, the only vines are there for cosmetic purposes only. The grapes used are sourced from vineyard all over New York. So I asked how do you remain competitive? He explained that Wineries from all over the United States transport their finished wine in large containers to Brotherhood to be bottled on their behalf. This arrangement suits both parties as the other wineries save on shipping costs which providing Brotherhood with added revenue. Last year, Brotherhood bottled approximately 4 million bottles. They are projecting to double that amount this year.

When we finally descended the cellar, it was as I expected, dank, dark, and cold and the air was ripe with mildew. The fixtures appear to be old, which added to the charm of the exhibits. Along the walls were pictures and plaques that dated from the beginning of the winery. On display was several equipment that were used in the bottling of the wines over the decades. The tour continued deeper into the cellar where Giant oak barrels are kept. 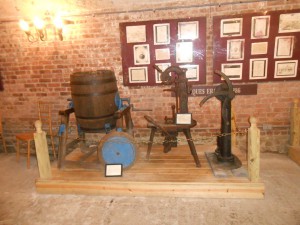 These barrels are well over seven feet tall and were built in the cellar. These barrels are unique in their design as they are not held together by glue, but by the stem of a plant. This plant prevents the liquid in the barrels from leaking out. These barrels are no longer used in the production of wine, but are left so that it can be a reminder of where the winery was coming from. 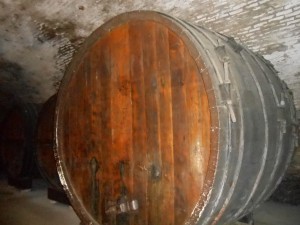 The next part of the tour is where they stored their sparkling wines. I immediately was aware of the various steps taking place in front of me. Directly in front of me was the riddling stand. Marcia and I clearly understood what was going on and confidently answered the questions he was throwing out. What stood out most to me was the thick coat of mildew on the bottles. He assured us that these bottles are well cleaned before they are labeled and sold.

The last section of the tour took us to where the wines are being aged. At this point in the tour, Franklyn informed us about the many accolades that their various wines has attained over the years. Most notable is their Riesling which is the only wine that they produce that is on the White House’s wine list. 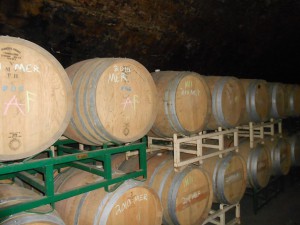 After we left the cellar, we started on out wine tasting, we had a choice between Traditional wines or New World wines, Marcia and I both decided to try the Traditional wines. The tasting started off with a great sparkling wine called Carpe Diem. This wine was had a lot of residual sugar, which I really love, it was fruit forward with hints of peaches and apricot. The flavors lingered after I finished drinking it.

The rest of the wines we tasted were specialty wines , although they were good wines, in my estimation, they did not quite match up with the first wine Carpe Diem. The next wine we tasted was called Sweet Lolly. Just as the name implies, it was sweet. Its nose was strong with grapes, it was almost over powering. The next wine was the May Wine. This was had a rose appearance and had a nose of strawberries.

The last two wines were all red wines. The first was Rosario this was a nice red wine with a lot of residual sugar. And the last was Ruby Port it was a really a great wine and was a great way to end the tasting.

After the tasting ended I started looking around the store. I came across the Riesling in their famous Cobalt blue bottle. I was immediately taken back to my fist glass of wine that I enjoyed. At the time that I tried it, I did not know who produced it, but I knew it was a Riesling in a blue bottle. I was so excited that I found my first love. I felt accomplished and a feeling of coming full circle.

Finding a wine that one loves is often times a daunting process. But a sure way of finding the wine is by trial and error. One avenue of finding and trying wines are through retail wine shops. Retail wine shops are popping up everywhere in New York City, so there is a place to cater to everyone’s needs. The retail shop that I will be discussing is Appellation Wine and spirit located in West Chelsea.  http://appellationnyc.com/ 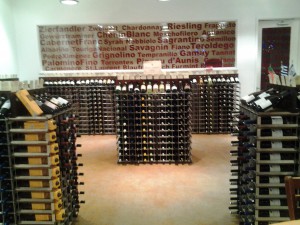 When I first walked up to the store front, it blended in with the other store fronts which I thought was a disadvantage. However, the name was prominent featured on the building when looking at it from across the street. Where the outside was plain the inside was warm and inviting. The space was open with light color on the wall which gave it an open, airy and fresh appearance.  The lighting added a soft glow, eliciting a warm feeling that put me at ease.

Upon entering the store, I was immediately welcomed to the establishment.  Appellation Wine and Spirit prides themselves on selling a variety of organic wines from producers who deviates from the normal and traditional viniculture practices. These wines has a more natural flavor  and a distinct taste without the added chemicals, according to  ales associate Charles who assisted me. The wide variety can be seen on their shelves, as the wines are displayed by regions; New World and Old World. The regions are then further broken down into light bodied to full bodied. Each bottle accompanied by a brief history about the wine or the producers of the wine. 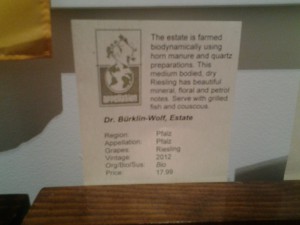 I was fortunate enough that I was able to participate in a spirit tasting event, where I sampled a cognac, a bourbon, and a mescal. This event is one of many tasting event that is held weekly. After doing the tasting I started scanning the store for a while, I was approached by a friendly sales associate that introduced himself as Charles and asked if I needed help. I gladly replied that I was indeed in need of help. I informed him that I was looking for a sweet wine, to which he replied “Sweet as in residual sugar or sweet as in aroma”. From there I was able to explain that I preferred residual sugar and was better able describe what wine specifically I was interested in. Charles was most knowledgeable and was quite helpful. He knew about his wine and was passionate about an it showed as I ended up purchasing two wines a   Dr. Bürklin-Wolf Estate Riesling 2012 or $18 and Vittorio Bera & Figli Moscato d’Asti 2012 for 20. 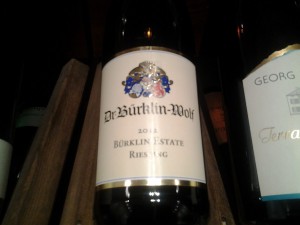 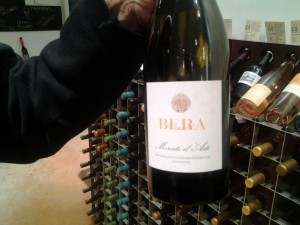 The store was a wonderfully experience. They offered a wide variety of wines from all over the world. The prices range from $8.99- $3000.  The workers are friendly and they go above and beyond expectation as they offer a delivery service. Although the store is relatively small, I is still quaint and intimate. There is also an additional room within the store towards the back that is available to host events. I was also interested to know that they have free wine tasting events that are held weekly. The store also features their wine of the month and wine of the week that is picked by the various employees. These wines are available to be purchased through their wine of the month and wines of the year program for a reasonable fee. They also have a loyalty program as well as a pocket friendly wine rack. The only downside to my visit was that they do not accept Discover cards.

His assignment has given me the opportunity to sample wines that I would have normally stayed away from. Appellation Wine and Spirits has made its way on my list of my favorite New York gems. 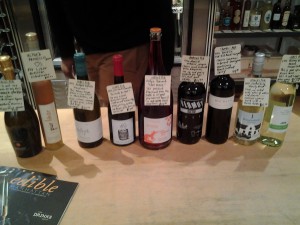