On Sunday, May 4, my daughter Casey and I visited the Brotherhood Winery located in Washingtonville, NY.  The winery/vineyard visit is the final assignment for my Wine and Beverage Management class.  It was an extremely exciting and pleasant experience, one that we both agreed to repeat.  I chose this winery for two reasons: 1) because it was only a little over an hour’s drive away from the city and 2) according to the marketing information it is America’s Oldest Winery.  Therefore, there had to be quite a bit of history which would make this the right place to visit for this project.

For $10 per person, we took the Tour and Tasting, which included 5 tastings either varietals or traditional and a souvenir glass.  According to Susan, our tour guide, Brotherhood Winery started in 1839, the original name was Blooming Grove Wines which was changed as to the current name in later years, by John Jacques and his wife, as a family farm with many acres of land.  By day he was a shoemaker and she was a homemaker who planted some vines because she was interested in winemaking.  The grapes they planted were Concord, Kataba and Isabella.  They became successful in creating and selling Sacramental wines for most if not all the churches in Bloomington, NY.

However, as time went on they were forced to sell off most of the land and were eventually forced to sell the winery.  Over the years, there were different owners who continued in the winemaking business, and the current owner along with two partners is Cesar Baeza a Chilean national who has studied wine in college and has continued in the winemaking tradition. Brotherhood Winery does not have a Vineyard; in fact, their wine is sourced from the Finger Lakes and Long Island regions of New York State.  The grapes from Long Island are Cabernet and Merlot and from the Finger Lakes they are Riesling, Chardonnay and Pinot Noir.   What they do have is about four or five short rows of vines in the front of the property that is used for experiments and study.   The Winery has three bottling lines: Sam’s Club, Walmart and Okeechee Jug wines.

From the Wine Process Flow Diagram that was sent to me by Kelly Ong, a wine specialists at Brotherhood Winery, although the grapes are not grown on the premises, once they arrive by truck they are processed as if they were grown on the premises.  She also goes on to state that the “Quality Control (QC) analysis which is done in their lab is to test for sugar, alcohol and acidity of all the wines they make, and the grapes are harvested when they are ripe.”    Following is the Wine Process Flow Diagram from 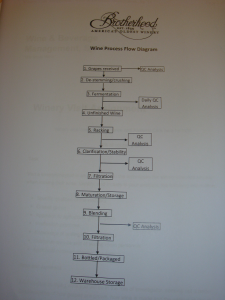 The tour lasted about an hour and it took us to the cellars where all the wine production was done before the technological revolution, including the corking and labeling, when most of the processes were done manually.  These cellars are at least 18 feet high and are considered the deepest underground cellars in America, according to Susan.  Here they stored the large oak barrels made from Minnesota Oak and some smaller ones.  They even had a room where their sparkling wine that they called “Champagne,” is stored.  Their brand is called Grand Monarch.  Since I study wine, I also know that unless Champagne is made in Champagne, France it has to be called Sparkling Wine.

Susan, our tour guide was also the individual who conducted the tastings and that was at the end of the tour.  She has worked at the Winery for three and a half years.  According to her, she is not a wine expert, but she has been taking classes at the Westchester Institute, and she was very knowledgeable.  She answered the questions before they were asked.  I thought that she was very impressive.  There were two styles of wines for tasting, Varietal and Traditional.  I chose the traditional which included Riesling, Chardonnay, etc., but the wine I really liked is called Carpe Diem and this is considered a Sparkling Champagne.  It is pale yellow in color, with a citrus scent and a taste of Papaya.  I have had it with Blue Cheese, Angel Hair Pasta with sautéed vegetables and spicy ribs and it was wonderful with everything.

This really was a worthwhile project and I have learned so much in this class that I was even able to open a bottle of wine (that had a T-stopper) the way we were taught to open it in class and there was no popping sound, just a quiet breeze.  I was elated! 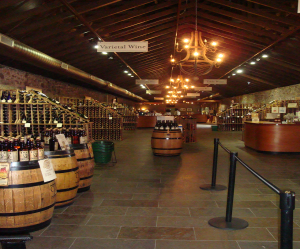 My next visit will be to a Vineyard where I will be trying to compare the similarities and differences between a winery and a vineyard – just to see for myself if there are any.
Although this is a required class it turned out to be more than I ever thought.