As a child I would love going on road trips to Long Island, upstate or even out of state, however, I hated when the adults wanted to randomly stop at a winery or vineyard. It was never any fun for my cousins and I because we did not know what the employees were ever talking about and we could not drink the fun juice, as our parents would call it. As I got older they continued doing this and I eventually came to realize it was not really fun juice but wine that they were purchasing and tasting.  My parents no longer go to wineries as often as they used to but I had the opportunity to visit the Brotherhood Winery with seven other classmates.

The Brotherhood Winery is in Upstate New York located at 100 Brotherhood Plaza Dr., Washingtonville, NY 10992, which is about an hour and a half to two-hours drive depending on traffic.  In 1810, Jean Jacques purchased land in the Hudson Valley and began planting grapes. By 1839, the first underground cellars were dug and they are the oldest and largest in America. These cellars are still used today at the Brotherhood Winery. Jesse and Edward Emerson changed the name of the winery to Brotherhood when they took control of the establishment. They sold wine for religious purposes throughout Prohibition. In 1921, Louis Farrell purchased Brotherhood and began conducting tours of the winery, which highlighted the expansion of the underground cellars. They hosted party’s ad events at the winery that brought thousands of people yearly.  The winery is opened Friday-Sunday from 11:00 AM to 5:00 PM January through March and 11:00AM to 5:00PM Sunday to Friday and 11:00AM to 6:00PM on Saturdays from April to December.  The tour and tasting pass is $10, the tasting is $7 and the tour is $6.

The drive to the Brotherhood Winery was not to bad. There was very little traffic, clear blue skies and the open road. When we arrived there was a sign that said, “Welcome to Brotherhood, America’s Oldest Winery.” 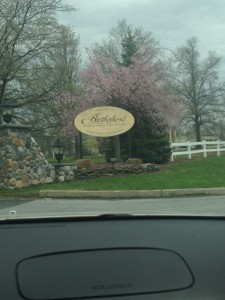 As we pulled into the parking lot I was not sure what to expect since I never paid attention to these tours as a kid. The buildings were made of stone and they seemed like they were from another time. We found signs that led us to where we needed to be to register for the first tour of the morning. The room was filled with wines for purchasing as well as other merchandise. There was also a long abnormal shaped high table. As we each paid for our ticket I decided I might as well do a tasting. The lady informed me there were two types of flights one being the Varietal flight, which featured more dry wines and the other being the traditional flight, which were a little sweeter. Since I have a sweet tooth I went with the sweeter flight.

The tour started promptly at 11:30AM by a woman named Joanne. She took us outside and started by telling us ab 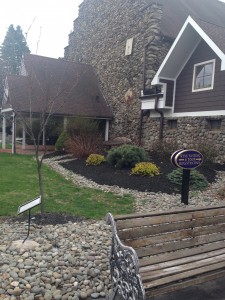 out the Grand Monarque Hall, which is now a banquet facility for private and corporate events. The Brotherhood Winery started with only this building and the first wines were produced there. As we continued to walk through the premises our next stop was outside of a room where the wines were tasted to make sure they are perfectly balanced. A few footsteps later, Joanne explained what we were looking at is a $250,000 machine that is responsible for bottling, sealing and labeling the wines. Due to the cost of this machine not every winery can afford to have one so the Brotherhood Winery uses their machine to bottle, seal and label wines for other wineries. After this, we walked past what looked like shrubs. Had I not known better I would of thought that it was a shrub, however, from studying wine I knew these were baby vines. The vines were planted from oldest to youngest with about six rows. There was Cabernet Sauvignon, Chardonnay, a French American hybrid and Sangiovese. 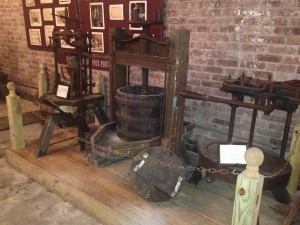 We then continued our tour to a set of steps that led us down into the cellar of the winery. As we trotted ineveryone could feel the sudden change in temperature and atmosphere. The cellars are about fourteen to sixteen feet deep with temperatures around 55 to 65 degrees Fahrenheit and 80% humid 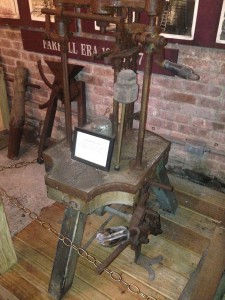 ity. There were various objects such as the wire hooder, which hammers the cork into the neck of the champagne bottles or the Agrafe machine, which places the wire cage over the champagne cork and twists it to hold it in place. The cellar smelled like a wet basement and as we continued walking the oak scent became prominent. We arrived at a room filled with large oak casks, then passed by a room filled with “champagne” that is produced by the Brotherhood winery. We then moved to a room with small oak barrels. There is a three to five year turnover for the barrels they use and each one costs $1000. We then exited the cellars and returned to the building we started from. 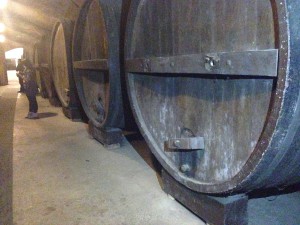 The fun part came next, two from our group and three people from Minnesota did a tasting. We all chose to do a traditional flight. Traditional flights are for those who prefer sweeter wines. When I was told sweeter I did not anticipate how sweet and different these wines would be from what I tried in class. There were five wines that we tried: 1) Carpe Diem Spumante which is a sparkling wine that was light and pale in color with notes of floral and vanilla 2) Sweet Lolly White which was pale yellow, straw and tasted like candy 3) Sweet Lolly Red was translucent red with no rim variation and also very sweet tasting like candy 4) May Day was a light salmon pink color with light floral notes 5) Was made from with the concord grape and is good for sangria.

I disliked all of the wines we tasted expect for the Carpe Diem Spumante. I was highly disappointed because these tasted nothing like the wines I was accustomed to tasting in 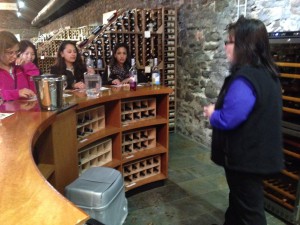 class. I thought the sweeter wines would have been less dry but instead they tasted like candy or over sugared Kool-Aid, which I did not expect. After the tasting was over we were given more information on what grape varieties are tasted for each flight. I would do the varietal flight instead because that includes Blanc de Blanc, chardonnay, and Riesling, merlot and pinot noir.

Now that I had my first real wine tasting experience and tour I have a better understanding of what to look for, what to expect and what to ask for future purposes. This trip was an amazing experience that provided me with real life experience with wine tasting at a vineyard. I look forward to planning a trip to different wineries with my friends and family.

1 thought on “The Brotherhood Winery Experience”