Brewery, B. (n.d.). Welcome to Brooklyn : Brooklyn Brewery. Retrieved May 25, 2017, from http://brooklynbrewery.com/about/about-the-brewery 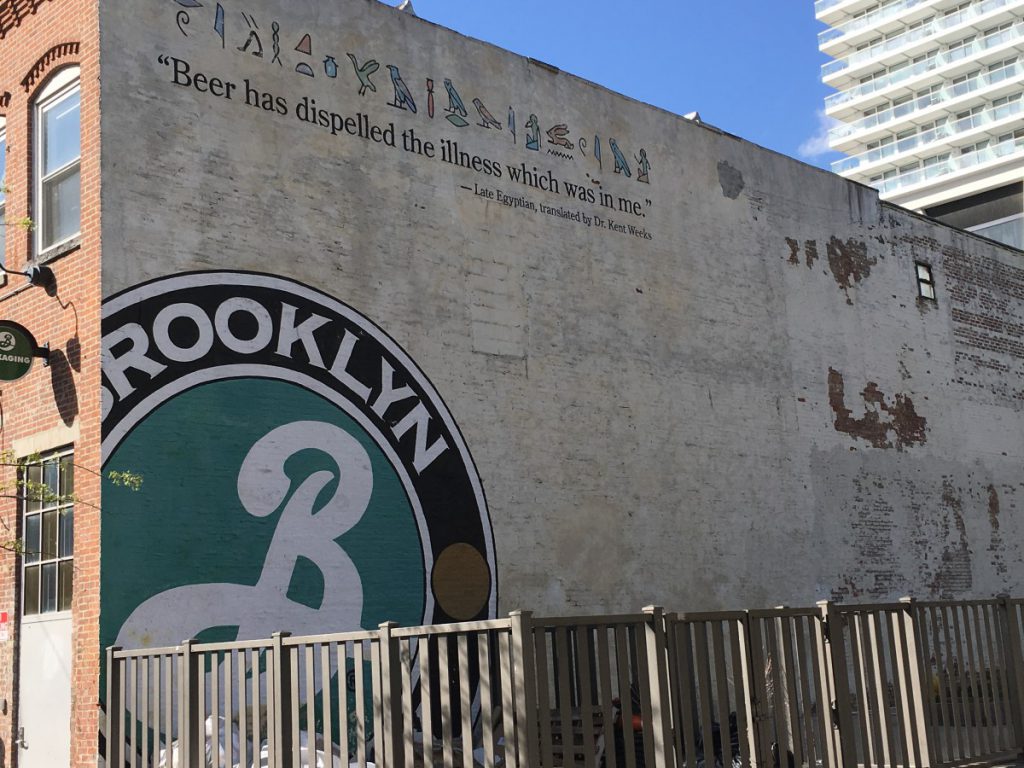 Outside the Brooklyn Brewery. 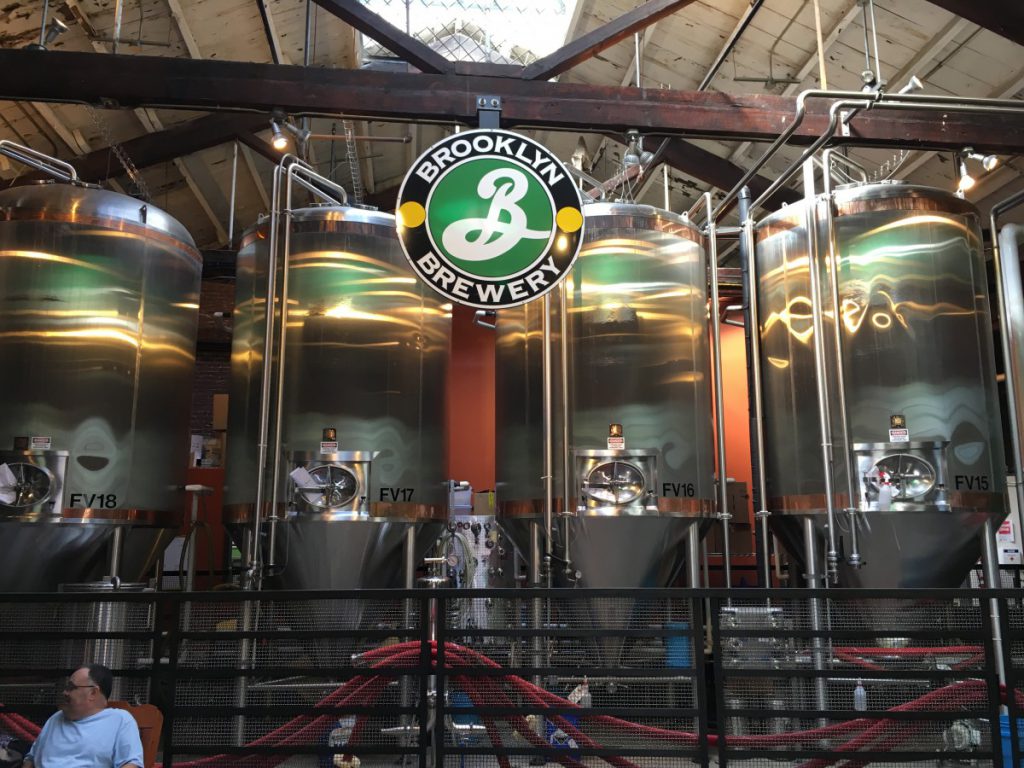 Once you walk in they have placed four 25 foot inactive fermentation tanks for décor. That’s marketing! 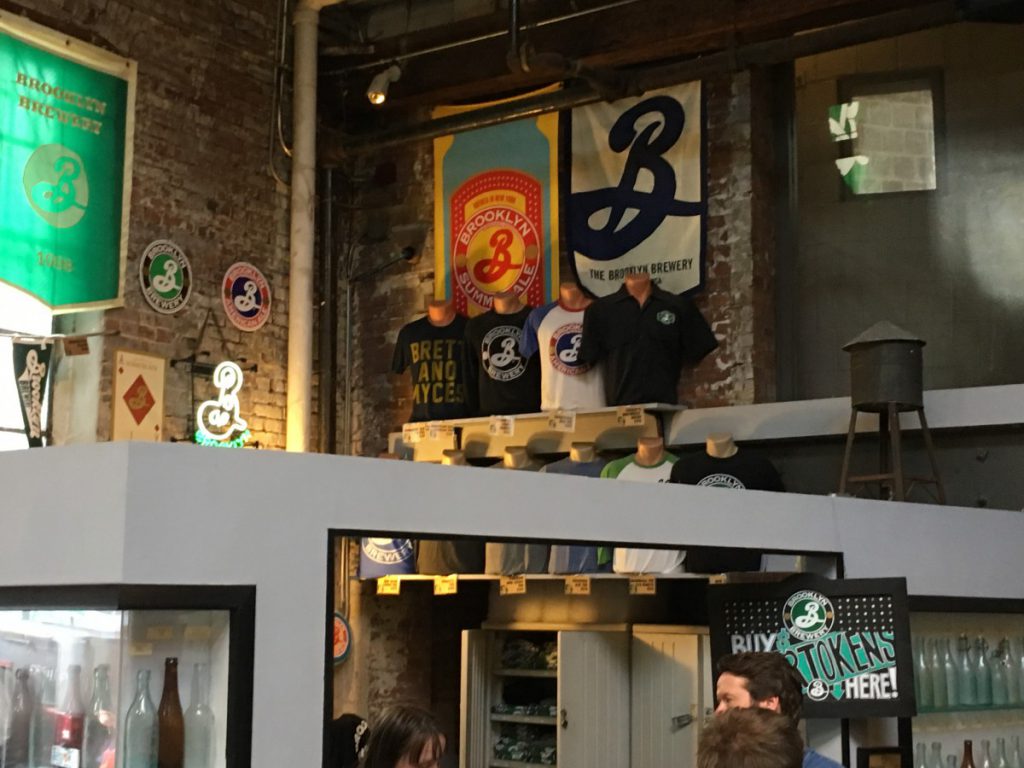 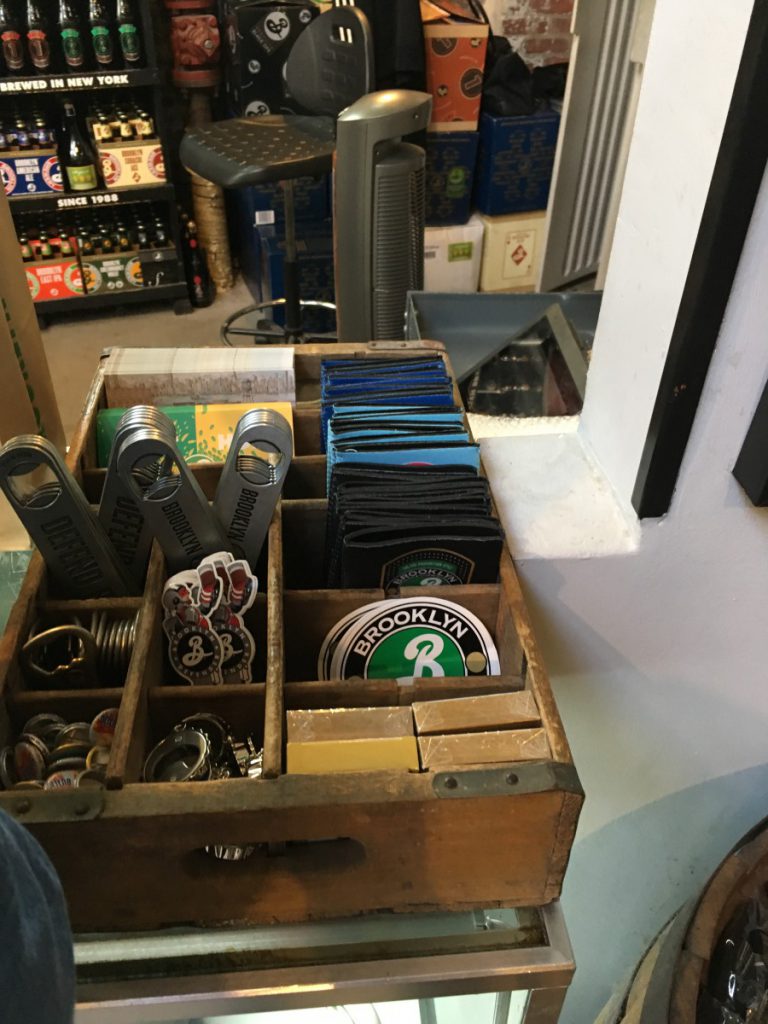 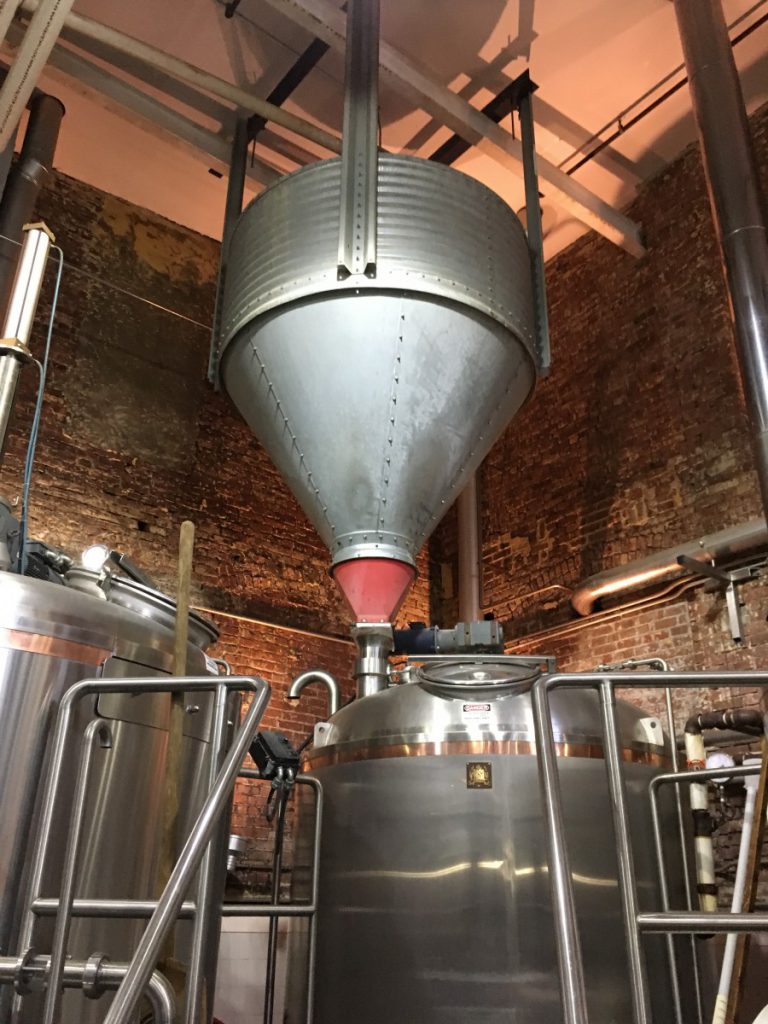 The cone shaped metal container has all the barley and malt that is added to the fermentation tanks from above. 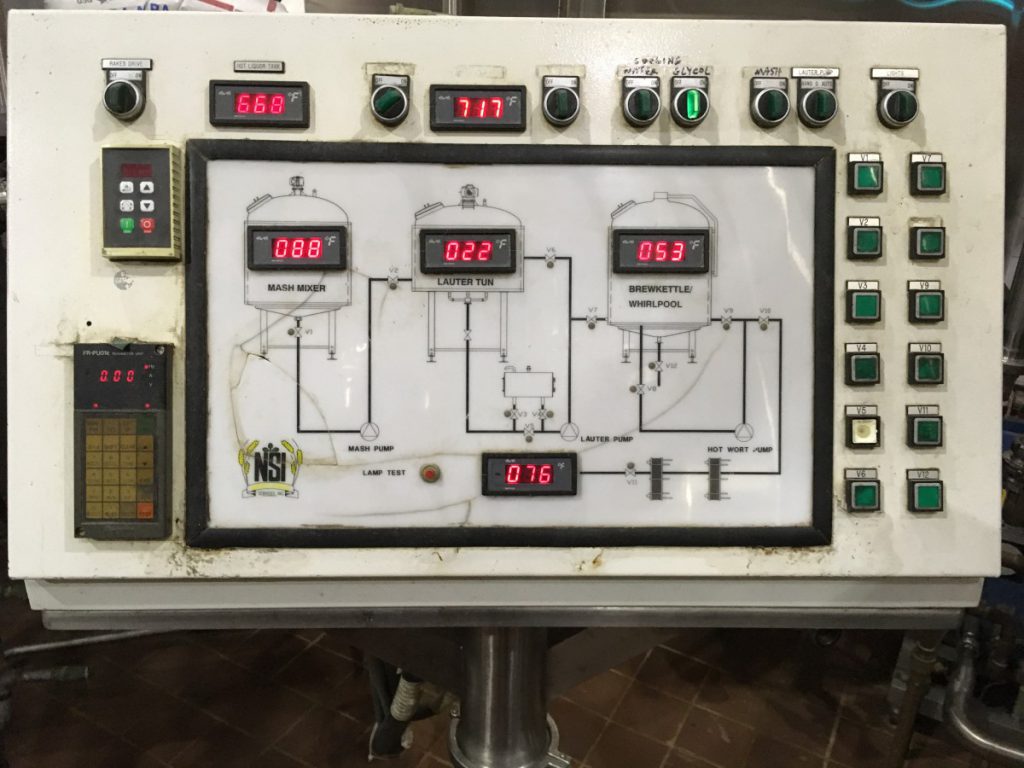 We can clearly see that all temperatures of the various processes during brewing are monitored. 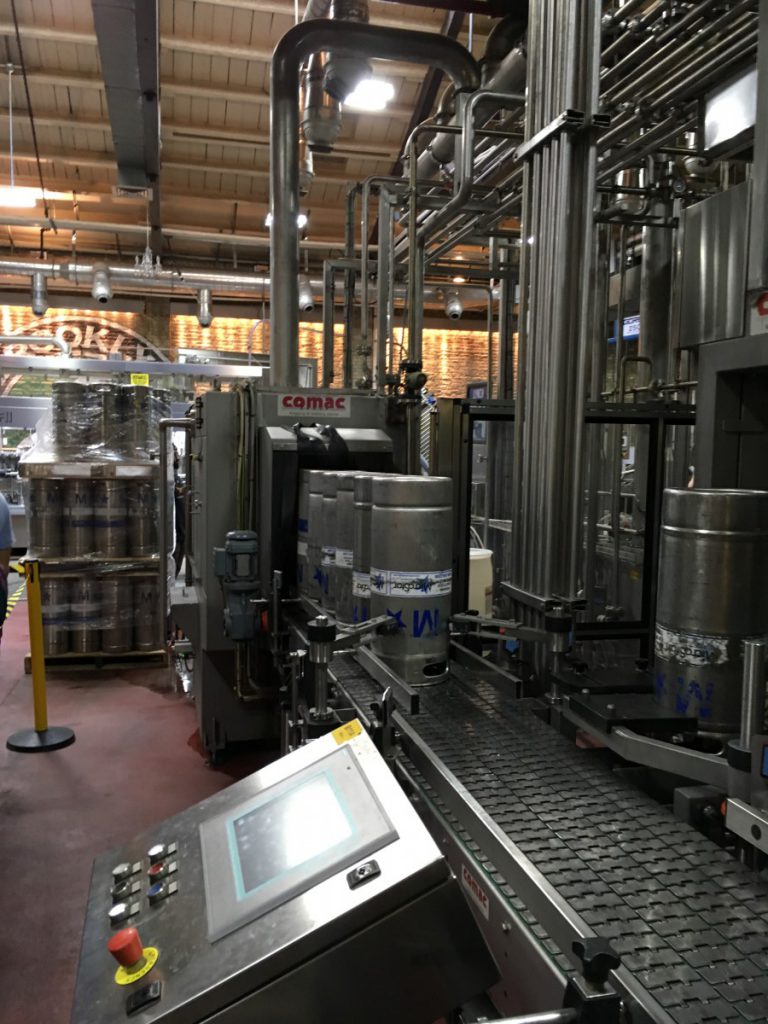 The whole process of putting the beer in kegs and packaging them together is automated but there are workers there to ensure nothing goes wrong. 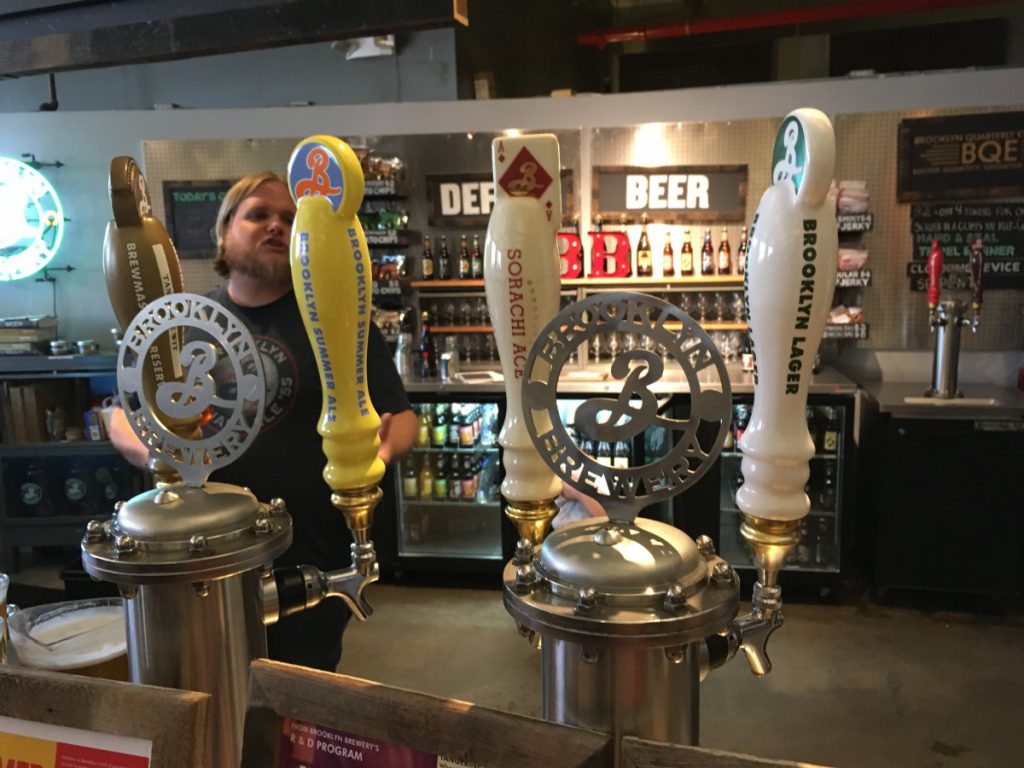 Our tour guide Tim in the background behind the bar lecturing us about the beers we were tasting. 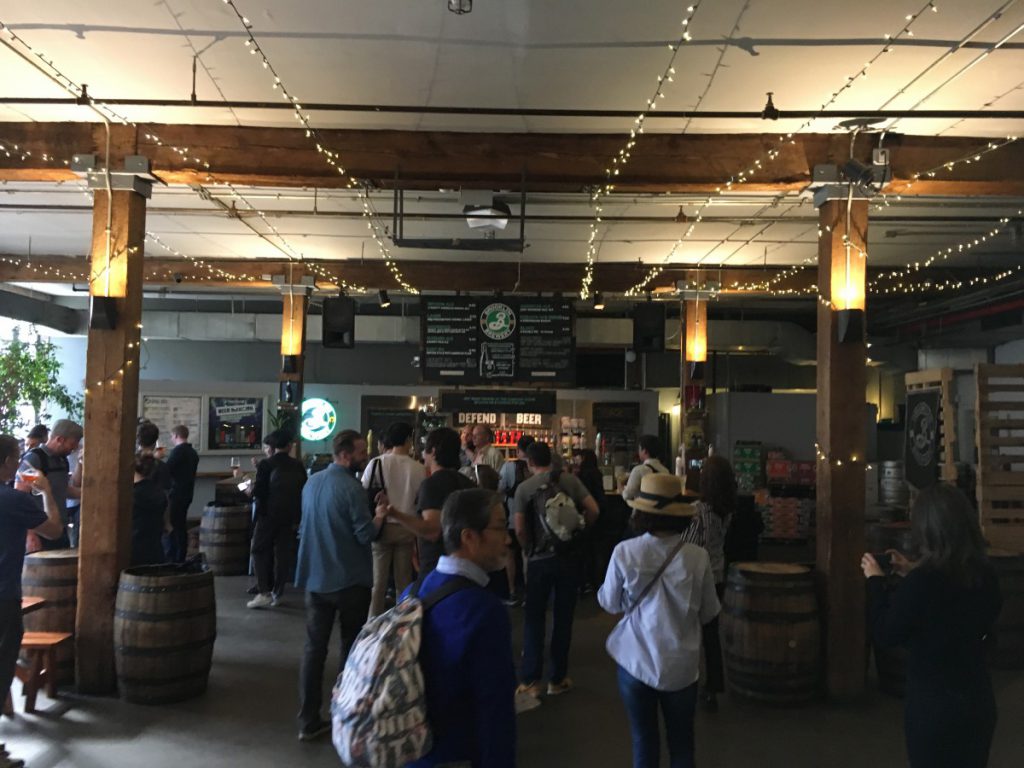 This was the tasting room where you can see clearly how spacious it was and had its own real bar with beers on tap for us to try. 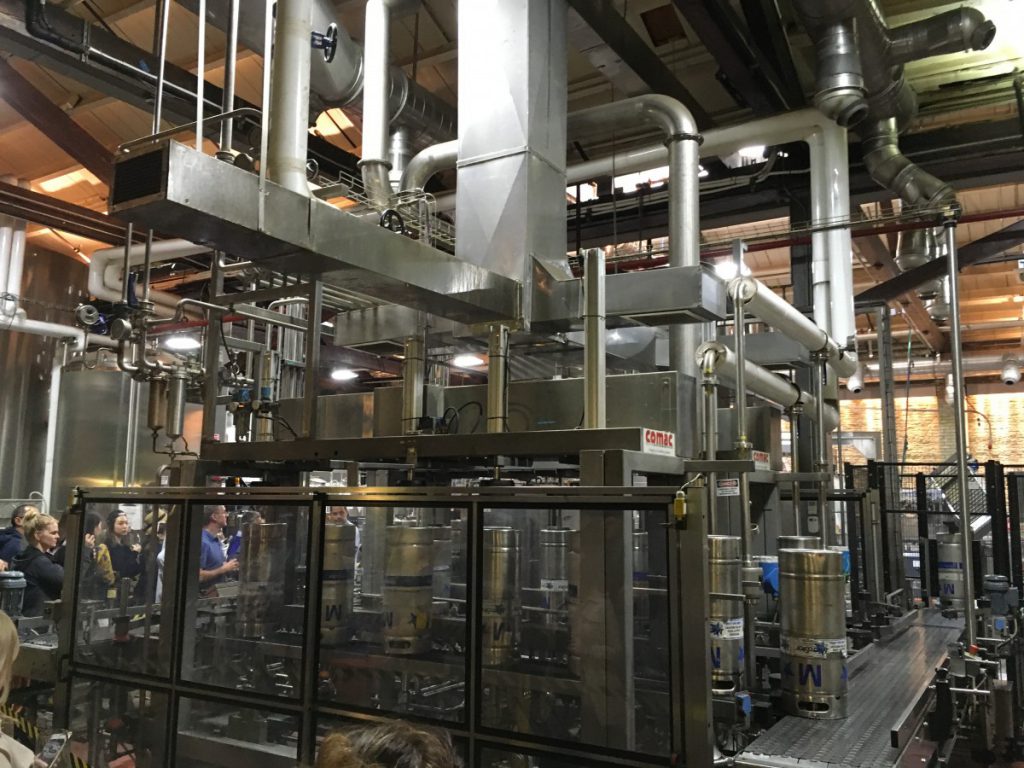 The whole facility is a huge array of pipes and machines that keep on working. Here is the machine that puts the beer in the kegs, very complex. The keg holds about 10 gallons of beer but the sizes vary if the merchant who purchased the beer orders bigger kegs. The Brooklyn Brewery sends beer to Norway and that beer is shipped in a huge container and then put in kegs over there. Tim told us it is much cheaper to do that. The quality of the beer is not changed. 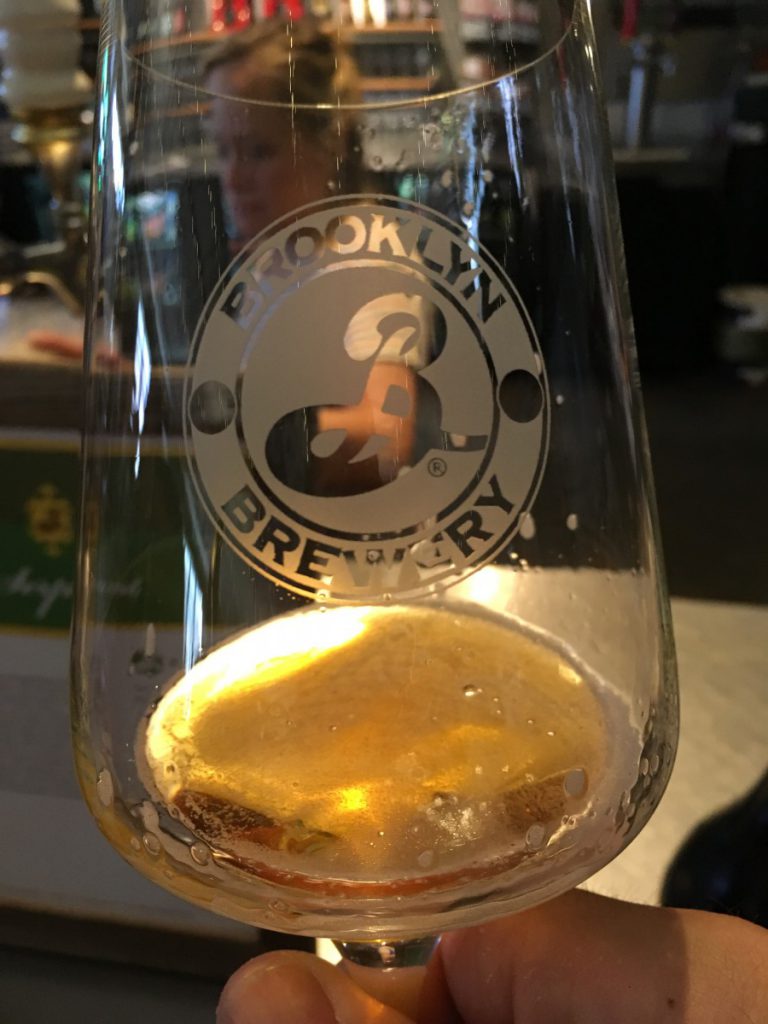 This is the Brooklyn Lager in the glass that I had the chance to take home as a gift for participating in the tour.

It always surprises me that whenever I have an assignment to do for school I end up discovering something new and most of the times very valuable. When I was told I had to visit a wine store for my assignment, my mind went to my local wine store in Astoria called Cypriana. Which is literally a block away from my house. But before I made the decision, my professor had already outlined a specific one in my area called Grand Wine & Liquor. Mind you, I have been in Astoria over 20 years and I always pass by this store as it is literally located conveniently on 30th avenue at my train stop but never had the courage to step out of my comfort zone and try something new. I am happy that I did. As most of you know this or not know this Grand Wine & Liquor is one of the biggest if not the biggest wine store in Astoria. I remember it that it looked rather old and the interior outdated just looking from outside. But they had recently renovated it. So I said one weekday to go with a few questions and with the interest of buying a nice bottle of wine for myself to be a “good customer” and visited the store. My first impression when I walked in was how clean and organized everything was. The high ceilings with clear signs that indicated the countries from where each wines came from and where they are located was easily an amazing attribute. Especially for those people that are looking for specific regions. Another very good attribute of this store was how spacious the rows of shelves were between each other which was about 2 yards apart. That gave plenty of room for you to walk with other people and not feel that the store is overcrowded. This gave you the sensation that you were at a huge department store like Macy’s with less of the hassle. Which is something a buyer really desires, to be comfortable while shopping. Another fascinating feature was the variety of wine producing countries this place had and not only your usual suspects like France, Italy and California. There were wines from Romania, Chile, Greece, Australia, South Africa, Bulgaria, Slovenia and Montenegro to name a few. I had assumed that this was to cater to the majority of Eastern Europeans that lived in Astoria. The customer service there was excellent. I had been greeted at the door with a smile and asked if I needed any help finding anything. I had told the manager there that I would be taking pictures of the store and wines for an assignment and he said that it was fine and if I needed more information I can gladly ask for it. So that is when I thought to purchase a wine and then be more confident to ask the questions that I already had in my mind for my assignment. So for the record, I had bought a bottle of Amarone Della Valpolicella 2012 from Italy. So when I approached the manager I had initially asked him if he has seen any differences in the wine retail sales over the years. His response was that people have become more savvy in choosing a wine to buy whereas back in the day they would choose more blindly with the price factor mainly in mind. This savviness has made wine sales increase dramatically and has made the consumer more educated about wines he mentioned. My second question was if he sees a specific grape variety being sold during the winter or summer more often. He replied with a very short answer, “there is no pattern”, he continued to tell me that people can buy deep reds like Cabernet Sauvignon in the summer because they are having a barbecue with steaks, and in the winter buy a Sauvignon Blanc for the grilled fish they are doing at home on a cold night. Yes it is truly that diverse he said. The final question I asked him was what is the most significant factor a consumer should consider when buying a wine, and he replied, “value and taste”. He explained to me that the stores like to sell wines of great value as people sometimes do not realize how great a wine is but only if it is offered to them at an enticing price. And the fact that if a person feels that he has not tasted a great Malbec or Cabernet they should always give it a shot and try that wine people are talking about. My only negative about the store was that despite the fact that they have so many regions I found that they just did not have the plurality of wines from California in their store that my other wine store Cypriana has. Maybe this was due to the fact that there are thousands and thousands of wines and it would be impossible to have them all and that they also conduct their wine sales online too which might be the key factor here. I did not want to mention it as a first time buyer but maybe in the future I will. Overall this was a great experience and I am thankful to our wine class and professor for allowing to me to discover Grand Wine & Liquor. 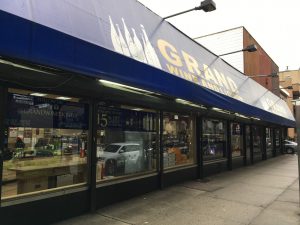 From the outside you can tell how large this store is which is conveniently located on the corner of 30th ave. and 31st street in Astoria. 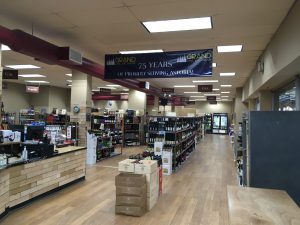 The store is very spacious with rows of shelves about 2 yards apart. The signs of the regions clearly hanging from above. 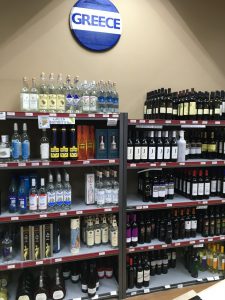 A small corner dedicated to Greece with all its famous spirits like Ouzo, Retsina, Metaxa Brandy and some very good wines from Santorini and the Peloponnese. 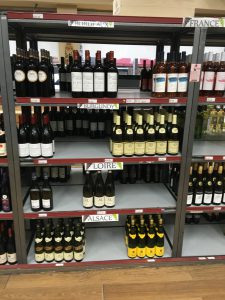 The various wine producing regions of France are indicated making it easier for the buyer. Notable regions like Bordeaux, Loire, Burgundy and Alsace. 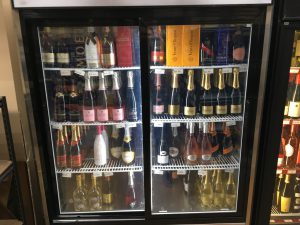 For those special moments of celebration. You have your Moet & Chandon, Veuve Clicquot which are champagnes and you have your Prosecco from Italy a popular sparkling wine. 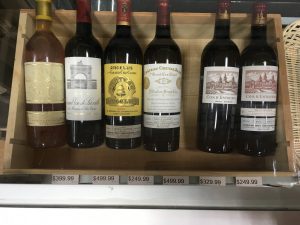 These are the finest wines the store has and at high prices as you can see. 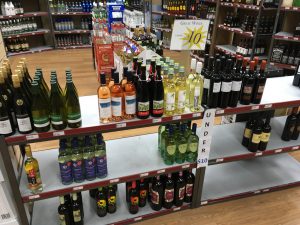 It is actually cool to have some great wines at cheap prices for those not ready to spend a lot.

I had the pleasure to visit the Grand Wine and Liquor store in Astoria today and purchase a bottle of wine to pair with a casual steak dinner. The Amarone Della Valpolicella 2012 is made primarily from the Corvina grape located in the Veneto region of Italy. After harvest the grapes are air dried through a process called “appassimento” which allows them to shrivel into raisins, which results in making the sugar and flavors in the grapes to get more concentrated producing a distinctive and full bodied wine ideal for aging. (Vivino) I cannot wait to taste this wine!

In our last class, my team and other fellow classmates had the opportunity to taste wines from Washington State and Oregon and a few from California. A notable reference to the crisp and citrus sauvignon blanc from Napa Valley the Joel Gott.