The Retail Store that I visited is called Leiser’s located in Flushing; it has been open since 1947. With just over 3,500 square feet of store space, the store has a large collection of bottles to choose from. When I called the day before to ask about coming into the store, the woman Jan seemed intrigued by the project and willing to help. Unfortunately when I got to the store it seemed that she had already left. I consulted Jason, who was stocking at that time. I noticed off the bat that the store was divided into two main sections: wine bottles to the right and spirits to the left of the store. When I asked Jason, about how the wines were organized, he mentioned that they are separated by types of wines. For example, Rieslings were in one area, while champagnes and sparkling wines were in another. The good thing about this is that if you are looking for a particular style of wine, you know exactly what section to go to. It is also beneficial if you are looking to compare the different producers as well as how terroir or producer affects the taste of the wine. The downside to this was that I feel that rather than focus on the individual wines and branch out to try different regions or producers, people would tend to look at the price. Speaking of prices, I noticed that the more expensive wines were at eye level while the less expensive brands were at the bottom. 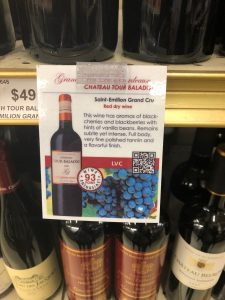 The Shelf talkers were very helpful in explaining some wine notes and food pairings for people who want to get into wine or are just looking to find something to go with their food. 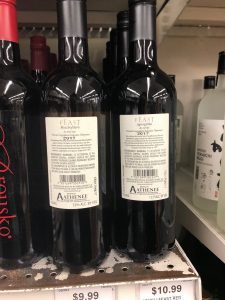 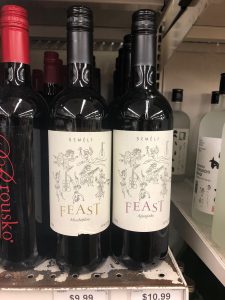 One of the countries that we did not cover in class was Greece. I found an Agiorgitiko Wine which is from red-wine grape from the Peloponnese peninsula. The Agiorgitiko grape is best grown in the mountainous and  Mediterranean temperatures of Greece. The labeling in the back described some of the flavor notes as well as food pairings. 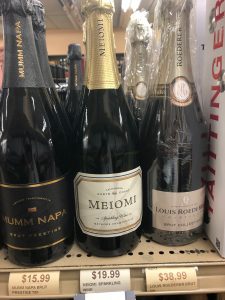 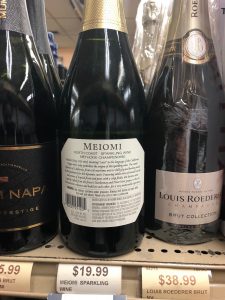 When looking for the sparkling wine, I found that most were either from California or France. The one I chose was Meiome Sparkling wine made in  the Methode Champenoise. The label in the back mentions that the Chardonnay and Pinot Noir Grapes had influences of “chilly fog and howling winds” from California’s North Coast. 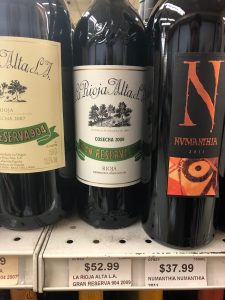 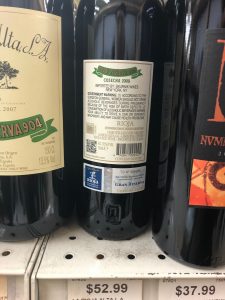 The Red Wine from Spain that I chose was a DOC (Denominación de Origen Calificada) Rioja Gran Reserva 904.

Leiser’s has a large variety of wines which were moderately priced ranging from $7.99 to $149.00. Overall, the experience to Leiser’s was pleasant, Jason was helpful and seemed to be knowledgeable about the locations of the wines, unfortunately he did not know much when it came to the regions or specifications.

I had the pleasure to visit Kings County Distillery for my Winery Assignment. It is located at 299 Sands Street, Brooklyn, New York, 11205 in the Brooklyn Navy Yard. This was my first time to a distillery and I wasn’t sure what to expect. I scheduled my tour for 5pm, so I had to leave early. I used google maps to navigate me to the location and was confused at first at the building I approached. The building was brick with vines growing on the sides of the wall. I read the sign that welcomed me into a bar, as I walked inside I immediately thought I was at the wrong location. I was at a bar. As I attempted to close the door and leave, a woman yelled out, “ are you here for the tour?”, I opened the door again and introduced myself. She confirmed my reservation and started to bombard me with questions about who I was and why I was here. I had to interrupt her mid-question and asked her for the bathroom, I had to go badly. She pointed the way and I walked down this very old, but surprisingly sturdy staircase. The bathroom was ancient and a little demonic, with five lit candles under a mirror. When I arrived back upstairs it was time to start the tour.

We walked to another building, and this was where the whisky was made and sold. Lisa, our guide, showed us the room first and then we followed her into a discussion room, where she talked about how whisky came about. She mentioned things about prohibition, speakeasies, the whisky wars. After the history lesson she took us back down stairs to explain how the whisky is actually made. She explained the products needed to make whisky. First you make a mesh, which is the grain you use and is the sugar needed to make whisky. The combination they used was 80% corn and 20% molten barely. The mesh is cooked to break down the sugar and then placed into a cannon to separate the liquid from the solids. Yeast is added and the liquid is heated with steam to extract the alcohol from the water. Alcohol Evaporates at a lower temperature than water does, so the temperature is very important at this stage. If it is too high, too much water will be in the end product. The vapor then passes through copper pipes to cool down and is collected into a tank. There is a process called spirit run where the alcohol that is produced is separated from non consumable to consumable. The liquid that comes out first is Methanol and it comes out blue from the contact with copper in the production process. Then the rest is Alcohol.

The tour ended with the group having a whisky tasting. I didn’t like anything I had and since it was so strong I left the establishment with a pounding headache. Other than that I enjoyed myself and felt like I learned a lot about the whisky production process. 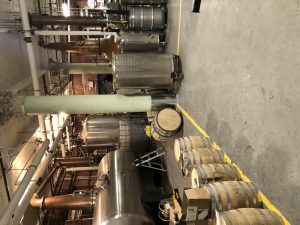 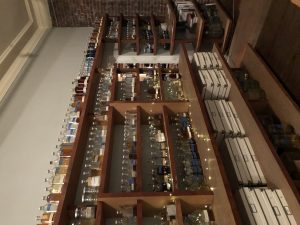 Whisky for sale and display 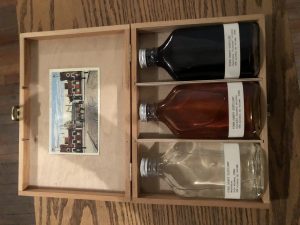 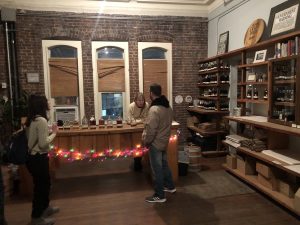 The wine location I went to was PJ Wine in Inwood. It’s located at 4898 Broadway New York, NY. It’s around 204th street in Manhattan. This location is a warehouse style Liquor store, so it was very spacious. As I walked in they had a slight incline in the walkway, and an automatic door. When I got to the door and entered I was greeted by an enthusiastic host. Along the whole wall they have wines organized by country and the countries consisted of everything from Spain, to New Zealand to South African. They also had wine on the floor, but most of the liquor like Hennessey, Irsih Whiskey, and Tequila.

I liked the organization of the store. The fact that they had the liquor split by categories and everything was spaced out good it helped. Also everything Thursday, Friday, and Saturday they have tastings of both wines and liquors, of both new arrivals, and sale items they’re trying to push out. I had the opportunity to try Bushmills Irish Whiskey. For some reason they didn’t have “shelf talkers” in the store. I seen a sign that I thought was one but the worker said that it was just a paper explaining the organic wine options.

The part of the store arrangement I didn’t was the cashier lines. The start of the line wasn’t clearly showed. There was a worker there but she didn’t make it known where the line began or ended. So until they called next I just stood there hoping I was going the right direction.