The winery that I will be talking about in this paper is Red Hook Winery in Brooklyn. I went there on the 14th of November around the afternoon. It was my first time experiencing winery and see the things that I’ve been studying in class. It was a fantastic tour of Red Hook Winery, and I enjoyed their wines. When I first entered the winery, I got a greeting from the staff and a welcome drink to start. The very first wine I had is Sauvignon Blanc (2016), from Marcari vineyard, North Fork of Long Island. It was terrific, and I loved it. It was not too dry, light, and aromatic to me. The staff mentioned that this wine has produced and bottled under the direction of Robert Foley as we know that Foley is the famous guy from Napa Valley, California, that creating an unusual and expensive wine. We got to talk a little bit about the grapes that they use to produce the wines and places that they purchase the grapes. Red Hook Winery seems to carry many grapes from the vineyard of North Fork of Long Island, then Finger Lakes. I asked the staff about the American viticultural area, but he seemed not to know much about it. He just mentioned that it is an officially recognized wine region in the USA, and all the grapes they have are from the AVA’s areas.

According to Red Hook Winery, “The North Fork of Long Island is dominated by the sea, in every sense. The growing region situated on a narrow “fork” of sea-level land that is sandwiched between the Great Peconic Bay on one side and by the full Peconic Sound on the other. Geologically, the North Fork is a glacial moraine and is composed almost entirely of well-drained sandy loam. Winters on the North Fork are cold but moderated by the surrounding water. Summers, on the other hand, can be hot and exceedingly humid. Humidity, rather than heat or cold, is the most significant challenge posed to winegrowers on the North Fork of Long Island.”

Additional, “The Finger Lakes are characterized by both the lakes for which the region is named and the cold weather that governs the region in winter. The region is situated in west-central New York; the first successful planting of European grape varietals was in 1959 by a Ukrainian botanist named Konstantin Frank. Viticulture is gathered around the steep edges of the four largest lakes. The water moderates the bitter winters and in the autumn helps capture warmth to extend the ripening season. Geologically, the Finger Lakes are dominated by highly fossiliferous sedimentary rock. Glaciation has created a dramatic up churning (& depositing) of diverse rock formations and has left impressively diverse soils in its wake. Racy acidity and keenly defined edges are characteristic of wines grown on the Finger Lakes.”

The tour began after we finished the drink. We walked inside the winery to explore the vitrification, and the first thing I saw was the big machines, many oak tanks, and the tons of dry grapes. The moment we entered the winery, there was a guy who’s cleaning up the machine. He was just finished pressing the grapes, and he let me touch the dry grapes that left out. Also, he opened the big oak tank to show the way they do the maceration. Then, he began talking about the steps of making the wine. We now entered the oak aging area or fermentation room, it was a big room filled with the oak tanks that imported from France. On each tank, there is a tape that has the name of a person who produces the wine, the region, the grape variety, and the vintage year on it. We tasted three wines that haven’t finished on the process of fermentation. The first thing that I noticed is the color of the wine is not normal; it’s light and muddy, which means it is not ready to be served. Second, the taste is strange and a little weird. And the last is I don’t smell any aroma of the wine, and it has only a little bit.

Most of the wines smell, taste, and look familiar, but the one that I get the most excited about is the orange wine or sauvignon blanc reserve. The sight part, the color is deep golden yellow because it’s darker than Chardonnay and regular Sauvignon Blanc. The wine is clear, I can see through it. The aroma is quite softer than usual Sauvignon Blanc. It smells clean, fresh, and orange aroma. The fruits that I am getting on my nose are jackfruits, green apple, orange skin, and a little bit of hazelnut. The intensity of the wine would be medium-high, and there’s no evidence of gas, no spice, and no flowers. On the palate, it is a dry, sour wine and has a tannin like red wine. I would love to pair this wine with Thai curry dishes at home, and the price of this wine is $60. It is a little high, but it’s worth it. I even got it one for myself.

The experience of visiting the winery is impressive. I can see many things that we’ve been studying in class in reality, and I also understand what they are talking about during the tour about wine production. I never thought that I would love and pay this much attention to wines, but it is a good thing that I know now, and I can explain to my friends about wine stuff. However, this class might be over, but I will continue to study wine and enjoy drinking it forever. 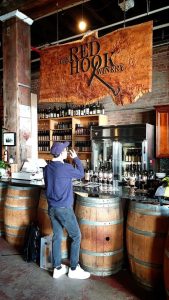 Me, enjoy tasting the wines at Red Hook Winery. 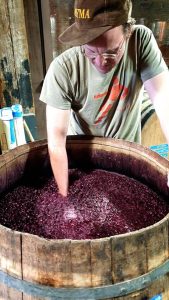 The guy showed the maceration process. He stirs the wine and the grape together to let them mixed well. 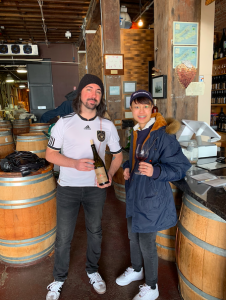 Me and my tour guide. 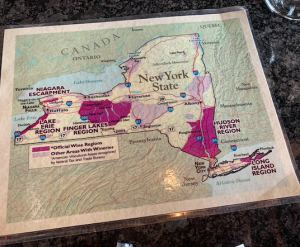 The map of the region in New York State that the Red Hook winery has bought the grapes from. 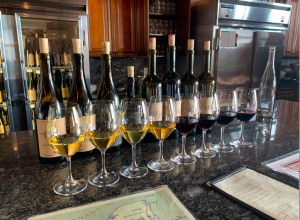