It’s the first day of tech week. Before rehearsal started, I spent the whole morning continuing with the painting, and doing touch ups. Even though I didn’t get to completely finish the drop, I was able to have 85 percent of it completed. It was just enough so the actors can get a visual for each scene during rehearsal.

The lightweight muslin that I had originally brought, was sewn together at both ends. Which made it harder to pull over the sonotubes. Because the fabric was sewn to the exact circumference of going around the entire unit, the fabric started to push the sonotubes inward towards each other. This time with the canvas, instead of sewing the seams together like with the muslin, snap tape was used to connect the seams. That way it can be to the full length of 21′ without being too difficult to install onto the sonotubes. Since the snap tape was installed at my house, I couldn’t get it to completely close as I was putting it up. The snap tape was sewn on a little too tight. Only the top half was able to close, but the bottom half was opened. It stood like this during the duration of rehearsal. 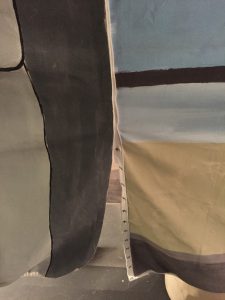 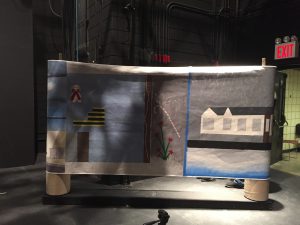 The rolling unit made a lot of noise during the rotations. The canvas is still falling while rotating, and the sag in the middle is still apparent. Before the next rehearsal I would need to adjust the snap tape so that it can close correctly, and finish painting the drop.

The technical directors’ job during tech is to be aware and accessible at all times and/or when there is a scenic relate question. It is also my job to make the company feel comfortable and that they’re being heard when asking questions. Just being a helpful hand and letting them know how to accurately use the scenery.

Before rehearsal I continued painting the details of each scene on the backdrop.

Finding possible solutions to solve the sag in the fabric. Such as taking out one side of the snap tape, and re-sewing it with the tension marked that why it’ll be fitted on the structure. There’s still a noise as the sonotubes rotates around the pipes, which is caused by the rubbing of the plywood circle on the flange. Adding a uhmw puck underneath the bottom plywood circle will help eliminate the noise.

Continued painting the backdrop. One of the scenes was painted the wrong color scheme, so I had to repaint it before rehearsal.

During tech, it was brought up that the overall height of the scrolling unit may be too short. All of the scenes involving the scrolling unit are done with live projections. Because of the placement of the camera, it causes many of the actors to crouch while performing. To eliminate this issue, I stepped out of tech and began working on larger castor plates in the shop. This time using 6″ swivel castors bolted on to a piece of 2×4. When the scene came to put scroller away, the actors had a hard time moving it because of the small castors it currently have on. Luckily, I had the new castor plates I made, and asked the director if I have time to quickly install them. Once they were on, this increased the overall height of the scroller, raising the canvas and making it easier to move around.

Completed all painting and touch-ups on the backdrop. The length of the canvas was still too long, and the bottom region of the scenes weren’t being shown on camera. After last nights rehearsal, the decision was made to eliminate a little over a 1′ off from the top of the canvas. Instead of cutting it off, I took the drop off the unit, laid it flat on the floor and folded over 1′-2″ from the top. To keep the fold, I added a pin every foot, then carefully resewed a new hem. Making the length of the canvas from 4′-9″ to 3′-7″. 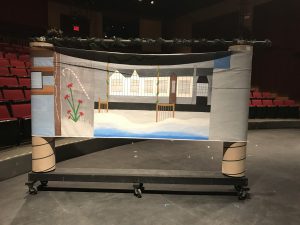 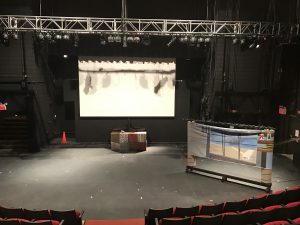 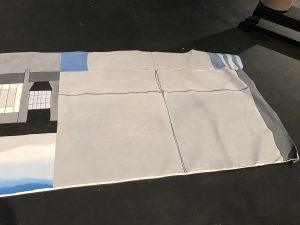 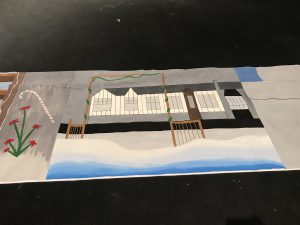 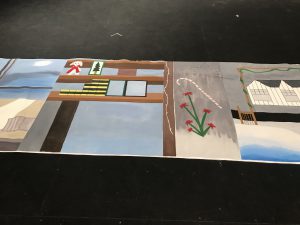 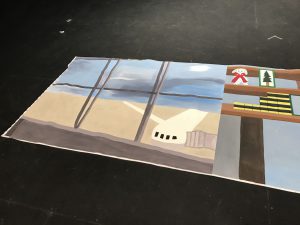 Working on this show taught me a lot about what it means to be a technical director. Talking to the designer and really making sure that I am putting their designs to life. During tech rehearsals, being on standby and being aware of what’s happening. Getting ready to jump in when they have a question regarding the scenery or the set as a whole. But one of the main lessons I learned was delegating. A good TD would delegate the build to the crew, and oversee the construction of it, without having to do all the physical work. Instead of going to school everyday, staying up late at night, and putting a lot of stress onto myself, I could’ve delegated tasks to the crew rather than working on it entirely myself. If you have a crew to assist you, make good use of them.

This entry was posted in Journals. Bookmark the permalink.