Load in day. The call started with the crew bringing down the flats to the theater, and assembling them. The crew was then split up into two groups. The first crew went up to the shop to cover the rehearsal blocks in Christmas themed contact paper, while the other group continued loading in. Meanwhile, I began base painting the fabric (lightweight muslin) white to give it a harder texture, so that the fabric doesn’t absorb all the paint. Also, muslin has a yellowish color, so painting it white makes it look more like a canvas. This took a lot of time because the fabric was installed on the mechanism that it rotates on, so it was difficult to paint. 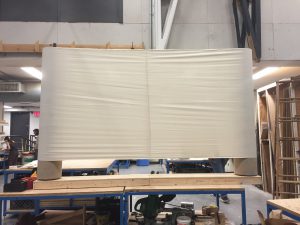 Depending on how much paint is applied, and the amount of coats, the fabric could potentially shrink. In this case, the fabric did the opposite. Before painting it on Monday, the fabric was snug on the sonotubes and didn’t sag as much in the middle. However, two days after base painting the fabric is less snug, is rippling on the sides, and there’s a noticeable sag in the center. The fabric looks really loose compared to before. Today was supposed to be the first day of backdrop painting, but instead it’s fabric repairing. I didn’t want to risk wasting paint on the fabric if it wasn’t reusable anymore.

In order to fix the looseness of the fabric I tried a couple of methods. I tried steaming it to get rid of the wrinkles caused by the rippling, and hoping that it’ll also tighten it in the process. It started to work in the beginning, but then it made the fabric worse. The next option was to create more tension. With the help of the CLTs, we attached a cheeseborough on the pipes, then added another pipe going across the unit (Figure 1). With one side tighten, we pulled one sonotube outward while pushing the pipe inward. Once we got the tension that we wanted, the cheese borough was tightened. The fabric looked better, but with the added tension, it was too hard to rotate. After much deliberation, a decision was made to cut the fabric and purchase a new one. Thus, setting back painting time which is crucial at this moment. 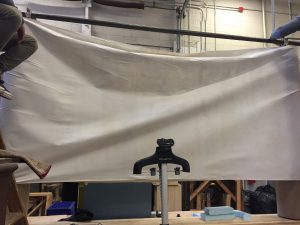 The new fabric, a light weight canvas, was purchased and hemmed. As I was awaiting approval for certain aspects of the renderings from the designer, I marked out where each of the four painted sections should go. I wasn’t able to begin painting today, but I lightly sketched out some of the scenes.

First day of backdrop painting. The first scene I’m painting is the airport. It took me about an hour to completely sketch it out. I wanted to make sure that the scene was scaled correctly within the 5′-2″ section. Mixing the paint took about an hour and a half. The scene has different shades of blues, and grays. Even though it’s hard to tell if I’m getting the true color in the rendering, it’s better to be close to accurate than not at all. Once all the paint was mixed I began painting. It took about four and a half hours to paint the scene.

The scene took a total of 7 hours to complete. 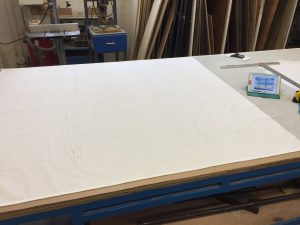 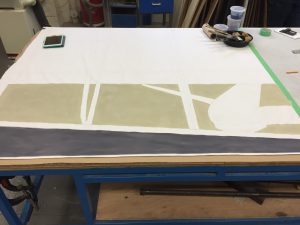 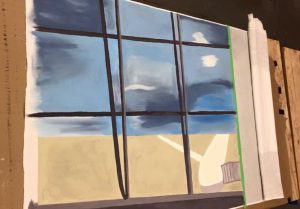 Second day of backdrop painting. The next scene is the house with the ice skate rink. It was difficult for me to distinguish the correct proportion of the house to the 5′-2″ section. After an hour and a half of trying to figure it out, I decided to move on to a different scene. I moved on to the airplane seats. It took an hour to sketch, one hour to mix colors, and four hours to paint.

The scene took a total of 6 hours to complete. 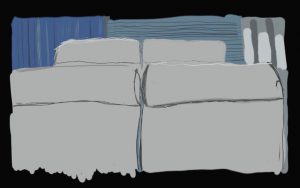 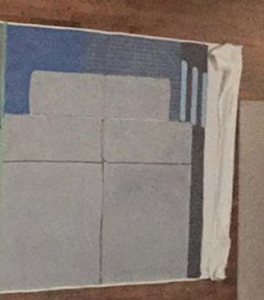 Over the past two days I was working on the backdrop while at school, but since the school is closed on Sundays, I took the drop home with me to continue painting. I originally scheduled to have the backdrop at least 90 percent painted by Monday, March 13th since it’s the first day of Tech. But due to a communication and time constraint error, plus the unexpected mishap with the fabric, the backdrop got pushed back an entire week. Forcing me to finish everything the weekend before Tech. It took me approximately four hours to sketch out the entire house and ice skate rink, and an additional four and a half hours to paint. 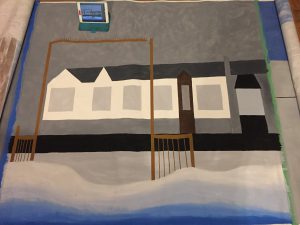 This entry was posted in Journals. Bookmark the permalink.