Spoken word poetry is one of my favorite forms of poetry so when I knew it was going to be taught i was excited. My favorite spoken word poem that we reading class was Elizabeth Acevedo’s “Hair” It’s a poem that speaks about the beauty standards of Latina women and that straigtening hair their hair to look more like people outside of their culture is “Whitening” I didn’t connect with this poem personally but there are plenty of women out here today that feel like they have to live up to or be in tuned with some kind of standard thats placed on that. When it comes to spoken word and older kinds of texts, I prefer older text. I like the vintage feel that comes with older text and I’m interested in the type of vocabulary that they use. Like Emily Dickinsons we grow accustomed to the dark. Spoken word just feels a lil to modern to me cause thats what it mostly speaks on, recent matters.

I don’t really think I’d be able to preform spoken word because I don’t really have a loud voice, so all that yelling will definitly tire me out after a few words. I do feel like I’d be able to write it though, and have someone more fit preform it for me. One spoken word poet that i Know of is one of my previous teachers. He wrote really good spoken word poems and is actually the person who made me gain interest in the whole style. He doesn’t have anything online though unfortunately. I feel as though spoken word poetry closely connects to the sub-genre of hip-hop battle rap. It’s like a more aggressive form of spoken word where your more getting at the other person than you are speaking on a crucial matter.

I chose to do my research on Langston Hughes because he wrote some of my favorite poems. Those poems being ” I too” and “Harlem ( A dream deferred ). Langston Hughes, fully named James Mercer Langston Hughes was born on Febuary 1st on 1901 in Joplin Missouri.  Langston wrote his first poem in 1921 called ” The Negro speaks of Rivers” which won an Coretta Scott King Book award in 2010 and was meet with great praise back in the day. One aspect of Langston Hughes life that caught my attention that i previously didn’t’t know was him being homosexual. Langston would keep his sexuality and even his life private and would hint at his homosexuality in his poems, He did this to follow in the steps of his “Literary hero” Walt Whitman who was known as the father of Free verse. Arnold Rampersad who was Langston Hughes Biographer wrote this about him “Hughes found some young men, especially dark-skinned men, appealing and sexually fascinating.”

One of Langston Hughes most popular works “Let America be America again” is a poem about the dreams of lower classed citizens and their disadvantages not being realized but theres still hope that one day their wishes will come true. Another type of work that Langston Hughes wrote besides poetry was a novel called “Not without laughter” The book was successful enough to make Langston pursue a permanent career in writing. He then wrote a collection of short stories named “The ways of white folks” On May 22 1967, Langston Hughes passed away due to complications from abdominal surgery. 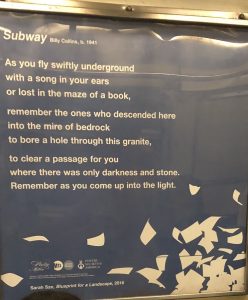 I found the poem “Subway” By billy Collins on the A train. My initial thoughts on this poem is that I feel like its meant to be a quick read thats suppose to make you feel some form of gratitude towards the people that made your whole Train trip possible. The Artwork in the back are white sheets of paper flowing in the wind on a Navy blue background. I feel like the only relevance the art in the back has to the poem is that it represents the MTA logo off of color coordination alone. This poem had to be chosen for passengers as a reminder to remind the train passengers to appreciate the hard work and dedication that made the whole trip possible. Evidence of this are the Lines (4-7) where Billy collins said “Remember the ones who… clear a passage for you.” referring to the people who started construction on the trains in 1904. At the end of the Poem in the last line he says “Remember as you come up into the light” meaning to think back on all the things he spoke about in the poem as you come up from the train station from underground. The speaker of the poem could possibly be Billy collins himself with the subject being appreciation of the people who made the whole thing possible. The questions i have for this poem and Billy collins himself is, what motivated him to create this poem and is he himself a New Yorker that rides the subway.