When I think about spoken word poetry I envision someone speaking about their own truth. And how they feel about what is a reality to them. I believe spoken word poetry has more dept, and creates more of a genuine connection because the topics are often about the speaker’s observation or reality. Even if you may not agree to what the speaker is saying there is still a message and it wants and needs to be heard.
I do not think I have enough courage to perform a spoken word poetry because based on my observation about spoken word there is always a message. I think it will be hard for me to channel into my deeper emotions and put it on display. And I don’t believe I have an important enough message or point of view that I wish to bring to light. Spoken word poetry is heavily based on being passionate and that’s a trait as of right now I don’t think I have. But I do enjoy experiencing spoken word poetry like Pedro Pietri’s Puerto Rican Obituary and the film Louder than a Bomb(2011). The two bodies of works were very inspiring and it made me think about my own experiences because I was born from another country and I am a person of color. And those are some topics that were strongly focused upon in the two bodies of works.

The Candian novelist-poet Margaret Atwood was born on November 18, 1939, in Ottawa, Ontario Canada. She was the second of the three children father Carl Atwood and mother Margaret Dorthey Atwood produced. Due to her father being an entomologist Margaret spent the majority of her childhood in the wilderness. Being exposed to the wilderness inspired her to start writing at the age of six, which she wrote plays and poems, etc. At age of sixteen, she came to the realization that becoming a writer would be the career path she chooses. She graduated in 1957 at Leaside high school and attended Victoria University where she continued to write. In 1962 she obtained her master’s from Radcliffe, although she strides for her doctorate for almost two years she did not complete. In 1976 she gave birth to her daughter Eleanor jess Attwood Gibson to an American writer Graeme Gibson.

Her writing granted Margaret with some amazing awards that depicted her hard work. Receiving more than fifty awards such as Governor General’s award, Booker Prize, Giller Prize, Queen Elizabeth II Diamond Jubilee Medal, Hammett Prize, and much more. Some of her most famous works are The Handmaid’s Tale, The Blind Assassin, including her poetry collection Double Persephone, The Circle Game and The Animals in that country. She often writes about human rights and many can describe her works to be gothic. With a gothic essence, many find her work to alluring and truthful while keeping a notion of darkness. Margaret Atwood carries on as she is well into her late seventies. 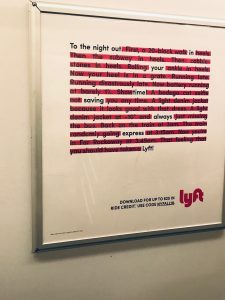 Before reading the poem my attention goes straight to the highlighted sentences and the eleven words that are not. It is clear from the start without reading that the poem wants to convey a message, which is represented by the eleven words not highlighted. When I began to read the poem I began to smirk because of how relatable I found it to be. The poem talks about a night out and the struggles that occur with the transport from your location to the next. The poem implies that the subject is a woman on her night out, many women can relate because they have had some sort of experience as such. I can relate, on the weekend I go out with friends and we often dress up not particularly in favor of the weather or our feet. When I go out I always depend on some sort of taxi so that my feet don’t blister and I am much safer.

What I also realized is that this poem doesn’t have verses and the last line “That feeling that you should have taken a Lyft!”,make the audience remembers the service being offered through the poem. All of the obstacles the subject faced on a night out allows the readers to be persuaded to take Lyft on a night out. So they don’t have to experience the long walks in heels or the long wait for the train. It is relatable on purpose so that readers attention is easily captured.