Found In: “Choi Jeong Min” by Franny Choi line 34 – “& accuse us of gluttony when we learn to swallow it.”

Explain: The word gluttony means being greedy. This helps me better understand the poem because it shows that the speaker is accused of being greedy but she accepts being called greedy because she says she is greedy.

Found In: “Choi Jeong Min” by Franny Choi line 22 – “her pseudonym, though everyone in my family is a poet.”

Explain: The word pseudonym means a fake name. This helps me understand the poem better because it shows how her mom doesn’t use her fake name but her real English name.

Definition: “a white inhabitant of the U.S. of non-Hispanic descent”

Explain: The word Anglo refers to a English person. This helped me understand the poem better because the girl is trying to make the expressions on her face look american.

Definition: “a feeling of contempt for someone or something regarded as unworthy or inferior”

Found In: “All-American Girl” by Julia Alvarez line  7 – “disgust, disdain-feelings I had yet to feel”

Explain: The word disdain means not showing respect because you are not important or good enough. This helped me understand the poem because it shows me that the speaker has not been disrespected yet but she doesn’t want to be disrespected so she tries to make herself more americanized.

Definition: “to ingratiate oneself with : curry favor with”

Found In: “All-American Girl” by Julia Alvarez line 14 – “as brown-nosing or cries of alegria”

Explain: The word brown-nosing means to act nice or use flattery to gain favors. This helps me better understand the poem because she is saying that if being polite means brown-nosing then crying because of joy could be understood as terror or sadness.

I don’t think I can perform spoken word poetry because I have a shy and timid personality and, thus, cannot speak in front of a large crowd of people. Spoken poems are intended for performances, which I most likely cannot do. I can try but I will most likely be very quiet and won’t make a huge impression on the audience, since I cannot show how passionate I am about a certain poem. When you watch videos of spoken poem, you can see and feel the author/person’s passion about the poem but I, on the other hand, cannot show that. I am the complete opposite of what you want when reading a spoken poem, which is why I probably can’t perform spoken word poetry.

Margaret Atwood was born on November 18, 1939 in Ottawa, Canada. She is currently 79 years old. In her early life, she did not go to school full time because her father was an entomologist so “she [spent] most of her childhood in the backwoods of Quebec.” Despite this, she had great interest in writing, even as a young child. At the age of 16, after going to school full-time from 8th grade, she decided to pursue her writing career. In 1962, her book “Double Persephone” was published and the book won the E.J.Pratt award. Another famous work of hers is “The Handmaid’s Tale.” It has a movie and TV adaptation and is very popular. Then, in 1962, she got her master’s degree from Harvard Radcliffe College. One of Margaret’s most famous book is “The Circle Game,” which was published in 1964. After this, she started to write all kinds of books, like novels, short stories, screenplays, and etc. A lot of Margaret’s books would revolve around a woman since Margaret is a feminist, for example, “The Edible Women” and ”Surfacing.” In 1968, she married her later ex-husband Jim Polk and they would later divorce in 1973. Then, she married her present husband, Graeme Gibson, and they had a daughter together. Some of her poems include “Morning in the the Burned House” and “Power Politics.” She also wrote novels, such as “ Cat’s Eye” and “Surfacing”. Essays that Margaret wrote include “Moving Targets: Writing with Intent” and “Curious Pursuits:Occasional Writing.” Margaret’s works have won her many awards. 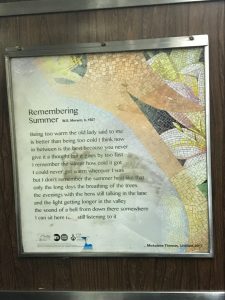 P.S. Last Line:  I can sit here now still listening to it

The title of this poem is “Remembering Summer” and the author is W.S. Merwin. I found this poem on the R train(line).  My initial reaction to reading this poem is that it gives off a very refreshing vibe. When I read anything, I often visualize in my mind, so when I was visualizing this poem, the scenery and the things the speaker describes puts me in a very happy and relaxed mood. Also, when I saw the author’s name, it seemed very familiar to me because it is written by the same author of the poem, “The Lonely Child.” The visual art that accompanies the house is a white lily and a tree branch. I think this particular poem was chosen for subway riders to read because it has a very refreshing feel to it. Many subway riders are really busy, either heading to work, school, etc., but when they read the poem, they will feel calm.  I think the speaker is a woman and the subject of the poem is the delights of summer. The theme that the poem explores is that summer is the best season because, to the speaker, summer is a very relaxing and peaceful time. For example, the poem states, “and the light getting longer in the valley/the sound of a bell from down there somewhere/I can sit here now still listening to it” (Lines 10-12). This shows that the speaker is very relaxed or calm sitting in a valley and listening to the sounds of bells while watching “the light getting longer.” Some questions I have about the poem is why the speaker could never get warm during the winter and who the old lady in the beginning of the poem was.

Definition: A watercraft bigger than a rowboat.

Found in: “My Boy Willie” by Anonymous line 14 – “When a man o’war vessel she chanced to meet,”

The word vessel mean a ship or large boat. This helps me better understand the poem because it can tell me what kind of transportation she meets at sea.

Found in: “My Boy Willie” by Anonymous line 36 – “Ye must mourn in black for my sailor boy”

The word mourn means to feel upset because of a  close ones passing. This can help me understand the poem better because it explains why everyone has to wear black, and what they are doing for the speakers dear sailor boy.