The name of my disease is “Hyper K”.

On the first game, I started to spread Hyper K on East Africa on October 17th 2015. On December 15th 2015 in these two months Hyper K affected one hundred people. After about four months passed on April 10th 2016, it affected million people. The First death occurred on February second 2017. It took ten months to the first death. I think new disease to be lethal took some time to evolve their Symptoms and abilities by itself throughout the transmission progress. When I used DNA points to evolved Hyper K’s transmission traits like rodent or birds and symptoms like coughing, it spreads faster. And I also evolved Hyper K’s abilities such as heat and drug resistance, it became more lethal.

Unfortunately Hyper K could not destroy the human race. It lasted 866 days before a cure was found.

In this time Hyper K also could not destroy the human race. It lasted 800days before a cure was found.

On the second game on Canada took longer to spread and the disease last shorter than the first one in East Africa. I think because of the differences on the level of medical facility and national health care system between two countries. Also it could be affected by East Africa’s lags in sanitary condition and national consciousness. And East Africa typically has hot climates. It could accelerated Hyper K’s contagiousness.

The First game helped me to understand pandemic situation better because it is more close to reality. Just about a years ago when Ebola occurred in USA, I think CDC did a pretty good job as a disease control tower. Although two people died and some people are still saying it is too early to relax, since December 1st 2014 there are no more Ebola infected person has been reported in USA.

Unlike USA, in West Africa people are still fighting for this disease and it is keep spreading in progress. And I think if a disease exists on the earth, it could always have a chance to evolve and mutate. We cannot just ignore them because it is none of my business. And there are more countries in the world still need our help.

During the game I noticed Greenland is the last infected country in both cases. So I used all my DNA points to evolve Hyper K’s all the transmission traits, symptoms and abilities to conquer Greenland.

It was one of the creepiest games I have ever played. Even the back ground music and sound crept me out. I think it could be perfectly fit for the Halloween.

Louis Agassiz used Zealy’s photographs to study and support his theory of polygenesis. He seems not only divide black people from other color of races, but also He defines black people as slavery, no socialized, and no equalized person. However, Carrie Mae Weems used Zealy’s photographs in the opposite way from Louis Agassiz. The Photographs were recreated by Carrie Mae Weems through using the tool of appropriation. She putted texts on the images. Then, the photographs become arts and massages at the same time. She seems to claim the right of equality, freedom, and liberty of black people to public through her works.

People say “A picture is worth a thousand word” I think her work is a great way to deliver her message to public because the images with strong color tones and texts are impressive and attractive. The texts are helpful to read her intentions from her works. She emphasized how the people in photographs were used and classified by white people during taking the photographs at the time. People were naked and set up in front of the camera. They were treated as black thing, subject, and scientific profile because they were slave. Ironically, Carrie Mae Weems seems to succeed to use Zealy’s photographs in the opposite way what Louis Agassiz’s purpose to make the photographs.

The title of the image I chose from Wellcome Images is “vaccinating his young child, held by Mrs. Jenn.” I infer this painting indicates how a child was vaccinated in 18th century because the title of the painting mention vaccination, and the painter’s name and life time were written on the bottom of the painting that Edward Jenner lived from 1749 to 1823.

If I compare this image to the other images what I saw in the class. This image has more positive feeling with bright colors than other images in the class. The inside house is not bright because the house does not have a light but sunshine from the window lights up the child. The men is probably a house owner and could be a doctor who attempt to inject vaccine to a child. I think Mrs. Jenn will be a woman who is holding a child, and a woman will be a maid who stand and roll up her sleeve. They look like an upper-middle class because the house looks like locate in the countryside. I can see that a men stands outside holding a cow, and a cat sits inside under a table. However, the man and woman who sit are well dressed. I also can see some fancy tea cups and pots in a tea cabinet and on the wall. A habit of a drinking tea is a symbol of rich people in 18th century. This image shows how people vaccinate their child in 18th century. There are no gloves, mask, and sterilizing instruments. It indicates that people have a lack of knowledge about hygiene.

The image captured my attention because I felt a positive feeling from this image. This image is involved a disease as other images but it shows how we can prevent a disease and lead a child to healthy life compare to other images what I saw in the class. I think many images what I saw in the class have negative points to disease. The images describes a disease as a pain, suffering, hopeless, and death with dark colors. 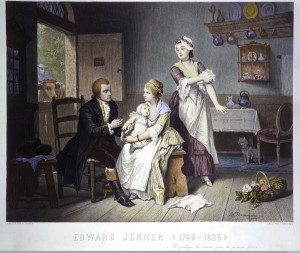