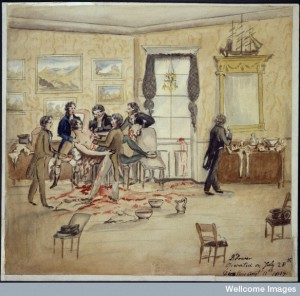 The painting that I chose from wellness images is striking because a surgical operation is being performed in a Dublin drawing room. A malignent tumor is being removed from a man left breast and armpit. The decor of the drawing room has a traditional look. There are a group of men surrounding the man with tumor. The man performing the surgery must be a doctor or have knowledge  of how to remove

I named the disease Praline. For the first game, I accidentally chose Russia 10/19/2015. I kept playing because I wanted to get familiarized with the Plague. The infection of the disease started spreading slowly because I wasn’t sure about how to make the disease more infectious and spread faster. Once I realized how to play, I started using the DNA points for Transmission, Symptoms and Abilities. The disease infected the first 100 people by 01/02/2016. The first million people infected by 2/15/2016. I used my DNA point to evolving the disease. I chose  Transmission traits (carrier insects) and Abilities (cold resistant). When wealthy countries started researching, I evolved the disease by using DNA points for the drug resistant abilities. Eventually I used all the abilities, transmission and symptoms. The first country it spread to was Korea in 2/4/2016. There after, the disease started spreading to other countries and millions were infected by 4/15/2016 around the world. The disease became more infectious than TB, HIV, Common cold, Small pox, Spanish flu and Black death. Billions of people infected by 12/1/2017. There were no healthy people in the world by 3/27/2017. The first deaths occurred Central Africa on 4/1/2017. I had to use more DNA points towards lethal symptoms for deaths to happen. Many symptoms mutated without using DNA points. Insomnia, anemia, paranoia and abscesses were some of the symptoms that mutated without using DNA points. The disease did not destroy the human race but most of the people in the world had died. At 97% completion of a cure, new strain of the disease developed. I think that research took long because the poor countries didn’t have funding to research. Italy sent research teams to infected countries hoping to find a cure. The disease was eradicated in 859 days. For the second game, I named the disease Praline2. The disease started in Canada on 10/20/2015. The first 100 infected 1/2/2016.The first million were infected by 1/24/2016. All the characteristics of the disease was the same but the wealthy countries started researching sooner and completed a cure faster. Many people were infected but less people died. A cure was completed by 8/23/2017.The Disease progress depended on the wealth of the country, the climates, the measures that some countries took to prevent the disease from spreading like shutting down airports, giving curfew, getting research starting sooner, the transmissions, symptoms and abilities used. The Plaque absolutely gave me a better understanding of a pandemic transmission. I did conquer Greenland. This was very educational and scary. The people sneezing, coughing, children playing and singing the ring around the rosy made it seem even more realistic. This is a creepy song to me now.

My experience when reading the text and looking at the images of Weems, “From here I saw what happened and I cried” was very powerful and moving. The photographs is speaking to the viewers, telling a story, gives history of slavery and racism. Weems bring the photographs to life. It took me to another place. I felt like I was watching movie, history in action. It helped me to visualize in depth the meaning of the message the photograph series is conveying. The pain and suffering of slaves. I see the power and control when I looked at these photographs, the different age range of each person and their position. These photographs was recreated for a different purpose. Weems purpose was different from the scientist purpose. The glass added with the text to tell the true story, give it a voice/sound, to connect the viewers so that you would evaluate and stay focused on what was being told. The monochrome red  was put in place of the other lighting  to hide certain elements that the scientist were exposing negatively. It is possible to read the text and look at the images at the same time. The work without the text would not catch the viewers attention for a long period of time and would not be as strong. The text gave the photographs a greater meaning, understanding, and strength. The text also communicates and educates. I think Weems photographic project was creative and is a perfect way to convey a message of history in such a unique way. This is powerful.