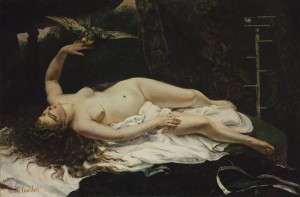 “Woman with a Parrot” was painted in 1866 by Gustave Courbet. It is oil on canvas with the dimensions fifty one inches by seventy seven inches. Courbet was a French painter and “Woman with a Parrot” was originally painted for the Salon. It was housed there and then ended up in the H.O. Havemeyer collection until 1929 when it was donated to the Metropolitan Museum of Art in New York City where it remains to this day.
The image is a painting. It has a large central figure and a small peripheral figure. The central figure is that of a nude woman. The woman is reclining on her back with the top of her head pointing towards the bottom of the picture. The woman is Caucasian and has pale skin. Her primary sexual organs are covered by a white cloth though her breasts are uncovered. Her breasts are on the smaller side of average. She has thick, heavy eyebrows, but no pubic hair. She has a very slight paunch on her lower stomach. Her hands are delicate. Her left hip is raised while her right hip is flat. She is lying on a green velvet day bed that is partially covered by a white cloth; said cloth reflects white light up against her splayed legs. Her knees are bent; her right leg extended forward, her left is back. Her right hand is resting on her right leg, her while her left arm is extended in the air.  The image is sensual, but not sexual.
On the central figure’s left hand is perched our peripheral figure. A large colorful bird that based on the title- must be a parrot. The bird has a small curved beak. Over its beak is a splotch of blue. Above the blue it is yellow; the bird’s breast is yellow too. The back and wings are a muted grayish green with orange, yellow and blue highlights. The wings are spread, the head faces down towards the bottom of the painting. The tail is the same mix of colors as the wings and points towards the upper left hand corner of the painting. The bird looks as if it has just landed and its claws encircle the woman’s left forefinger.
The background is dark and muted. A tall stand with several horizontal bards is behind the right corner of the day bed. The viewer can assume that this is a perch for the parrot. It is an ambiguous grayish brown that could be wood or tarnished metal. Behind that hangs a dark, but richly patterned cloth and in the far back ground seems to be trees and a sky.
The way that the parrot is placed on the woman’s hand, the angle of its head in relation so her head suggests interaction. The woman smiles up at the bird. In my opinion she looks slightly delirious, as if she has a fever or is on drugs. She is nude, never uncommon in art, but it may suggest that she isn’t thinking clearly. Moreover, beyond artistic expression, why is a woman in a fairly conservative time lounging nude with a bird? Birds are known carriers for disease. From a simple hygienic stand point, I can say that I would never be naked around a bird because of the propensity to defecate everywhere. So is the woman feverish? Is she high? Does she suffer from some mental illness? Or is it simply a romantic artistic choice? The woman has ruddy cheeks but a pale body, heavy eyebrows but no other body hair. Any of these things could point to an illness, but more likely they are all fanciful artistic choices. Certainly if I had not been looking at this image for this class it never would have occurred to me that it is medical in nature.