The Woolworth Building: The Power of Nickel and Dimes

The Woolworth Building: The Power of Nickel and Dimes

When people think about New York City the first thing that comes to mind is skyscrapers. Many people know that the city is rich in history, but not everyone knows the history of ever building. The Woolworth building is one of many building that going over looked. The buildings history, owner and architect has very interesting story. All three of them share a common story of success. The building is a reminder of their hard work and dedication. 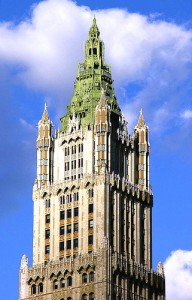 Frank Winfield Woolworth was born on April 13. 1852. Woolworth lived in a small town of Rodman New York with is parents and Brother Charles Sumner Woolworth. At the time his family was very poor and made a living running a small farm they owned.

At a young age wool worth started working as a clerk in Augsburg Bushnell store. It was a small general store in water town. At the store he was impressed with the success of the five-cent clearance sale items. He was inspired to open up his own discount store, the first of its kind. He was the founder of F.W. Woolworth Company. It was the first five- ten cents store to be established. The store was also the first to use self service display cases. This way customer did not need the help of a sale associate to look at a product. By the 1911 F.W. Woolworth Company has five hundred eighty six stores around the United States and around the world.

Frank Winfield Woolworth died five days before his sixty seven birthdays on April 8, 1919. At the time he died he was estimated to be worth about six and a half million dollars. Woolworth was buried in Woodlawn cemetery in the Bronx. 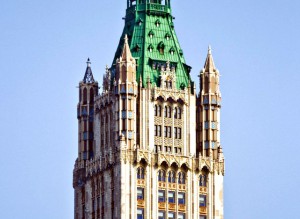 Cass Gilbert believed architecture should reflect historic traditions and establish a social order. He uses this theory to design all of his building and spaces. Cass would look for important historic events and uses them with in his buildings. By doing this he was one of the most profoundly influenced architecture during the first decades of the twentieth century. He took all of this positive feedback and became the first celebrity architect in America to design a skyscraper in New York City. 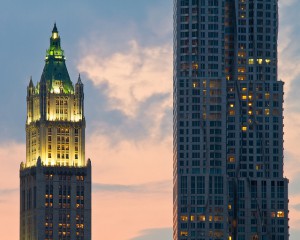 One of Cass Gilbert buildings is the saint, Louis art museum. It is a museum in forest park St. Louis, Missouri. The museum was built in 1904 for the world’s fair in St. Louis. The building is the main building of the Palace of Fine Arts for the exposition. Another one of his famous building is the United States Supreme Court Building. It was built in 1935, and is located in Washington D.C.

Cass Gilberts work left him as a very famous architect. May people waited to work with him, or use some of his work as an influence to their own. John Marin a well know artist for his landscapes and watercolor painting told interest in the Woolworth building after it was completed.   He painted the Woolworth building several time using different techniques. Frank Lloyd Wright also praised Gilbert for the use of lines in the building, and the use of ornamentation. Cass gilberts technique of cladding a steel frame building became the model for the decades. Many building started to use this style of construction. 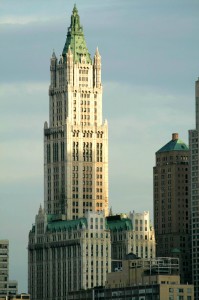 The main entrance resembles a European cathedral with many symbols like salamanders and owls. The lobby is covered with marbles and has mosaic of the construction of the building covering the ceiling. One of the sculptures is of the architect Cass Gilbert holding a model of the building. Another is of the owner Frank Woolworth paying for the building in cash; thirteen and a half million. There is grand stair case leading up to the original headquarters of the lrving national bank. All of these things make the Woolworth building one of the most recognizable buildings in New York City.

On July 31, 2012 an investment group led by Alchemy Properties bought the top thirty floors of the building. The tower will be turned in to 40 luxury apartments with a five level penthouse on top. Many people are looking for apartments in that area. The investment group says that the building historic status down town “has the catch to give it an edge over its competitors. “The luxury apartments will began at three hundred fifty feet from the ground level. Each apartment will have a view of lower and midtown Manhattan. The 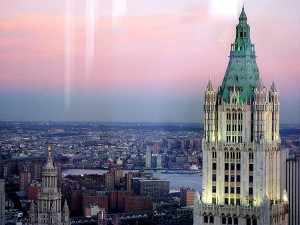 apartment will have ceiling heights that are about eleven to fourteen feet tall. A fifty five foot long pool in the basement will be restored for the use of the people who live there. The apartment is set to sell at seven and a half million dollars for about two thousand five hundred square feet. Over the entire project will cost one hundred fifty million dollars to build the apartments and plus the sixty eight million dollars used to purchase the space. The investment group hopes that project will be completed by 2015

This building tells the story of how dimes can build an empire. Frank Winfield Woolworth had a dream to open a store that was affordable for everyone, and ended up becoming one of the richest men in history. Frank Woolworth paid off for this building in nickels and dimes. If we all follow in Woolworth foot steps we might all become wealth.

The Skyscraper and the City: The Woolworth Building and the Making of Modern New York by Gail Fenske