The Hearst Tower, located on West 57th street was designed by Sir Norman Foster of Great Britain. The building is the first in New York City to be listed as a “green” building which should be a new, widely used concept in architecture. The building is a high-tech, modern styled building. It was constructed in April 30, 2003. It was built on top of the original Hearst headquarters which is the smaller, 6 story building that originally occupied the space. This building really shows the contrast of the different style of architectural design through this project.

Historical approach:
Sir Norman Foster was born in Manchester, England in 1935. He grew up with a father who managed a shop in a poor location of Manchester. He was sent to a private and grammar school by his parents. At the young age, Foster had an urge to finish school in only two years and move forward into the work force. “He was determined to make money by all means” was stated by the 2010 edition of Design Bloom Newsletter. The building that inspired him was The art deco express building in Manchester.

When the Hearst corporation began to grow, there was a demand for a bigger building. In 1946, plans were meant to build a high rise building on top of the 6 story headquarters. This plan was never executed. In 2003, construction on the Hearst Tower started. The building was constructed on top of the 6 story building. This bigger building would be able to hold 20,000 employee’s. The tower began to be constructed in April, 2003 and finished in 2005. It was a huge move toward the modernization of Architecture. This building had a unique structural design to it. It was listed as a high tech style of architecture which was very common from Sir Foster.
Formal approach:

The use of glass for the surface area of the exterior of the building is really interesting to the human eye. Usually other buildings that use glass for their exterior keep their buildings flat, and straight forward. In “Writing about Architecture”, by Alexandra Lange, Lewis Mumford states “Transparency is the future of architecture.” I agree to this because a lot of modern buildings are being built with the continuous use of glass that makes up most of the exterior if not, all of the exterior of the building. I think it is just a matter of time until we find a new resource that could replace glass.

The building was the first in New York to be listed as a “green” structure. The structure of the building uses recycled metal. The metal is 90 percent recycled. That isn’t very common in other buildings especially considering the design of the building as well as the era it was built. The floor of the atrium is constructed with heat-conductive limestone. The stone has the ability to heat during the winter and cool during the summer. The waterfall located inside the building, uses recycled rainwater from the roof. There is a tank in the basement of the building which collects the water from the roof. It then distributes the water through the waterfall.

The Hearst tower really attracts people through the exterior structure of the building but, when you enter the atrium, you will only be amazed at the design. Sir Foster really succeeds at keeping the interest of the exterior to the interior of the building. When entering the atrium, you see huge steel beams that go from the ceiling to the limestone floor on a 45 degree angle. You then notice the usage of natural light. The huge, diamond shaped windows capture enough light to brighten the area of the atrium.

A “green” building is a very strong movement to the new generation of architecture. Finding different ways to use and reserve energy in an efficient matter plays a big role in our future. Many buildings ignore the use of a “green” structure. This building is far superior in terms of creativity than many other buildings in New York.

Experiential approach:
I really enjoy visiting this building. It shows no resemblance to any other buildings in New York. The building is certainly one of its kind. A building with this many attributes to it, creates intense competition in the field of architecture. An energy efficient building itself would gain a lot of attention to people of interest. I feel like this building would inspire many people in and out of the field of architecture. If people had the chance to really study this building, they could be enlightened on the intelligence of Sir Norman Foster. He deserves a lot more credit than he is given by the public. Many people have never even heard of this building nor seen it.

I think the contrast of the old building and the new building is very interesting because they are two completely opposite structures. I am very surprised that the original headquarters was not torn down prior to the construction. This is a true example of preserving architecture. In the book, “Writing About Architecture, ” in chapter 3, “What’s worth preserving”, Lange talks about what gains to right to be preserved. I think that was one thing that was kept in mind when designing this tower. The old headquarters reminds the people where the business started. The new tower reminds the people where the business is heading. 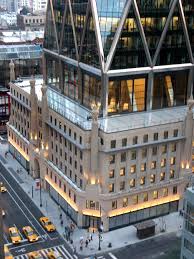 Activist approach:
This building serves as a change in architecture. It should give other architects ideas on what they should start implementing in their work. The fact that the building is located in New York, it should have a higher influence on architects because it should motivate them to start creating buildings with new explorations within the designs. If all buildings were flat surfaced, straight up structures, there wouldn’t be much progress in the field. 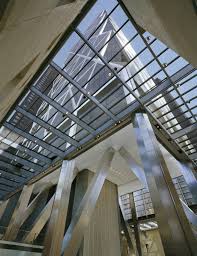 I think the building’s a landmark to people who actually know about the structure and the different uses of “green” materials. If this building was publicly promoted to people, they’d probably appreciate it more than they do without knowing about it. It is really amazing how a building can have a great design and also be good for the environment. This building is more than just an attraction, it is a movement. It is a gateway to a new era of architects. I think if buildings like this would spread around in all cities, America will be definitely on a new movement that would make our country an even better experience to visit in terms of architecture.
I think this building serves as a positive structure to its community, and city. It is located in a busy city where energy is constantly being used and wasted. We live in a city where cars and buses are beginning to be made to conserve energy and still serve its purpose to the people. If cars and buses are the only thing in this city making progress, why shouldn’t architecture be making progress along with them?

When one building is being created for a positive cause, shouldn’t others follow? I believe buildings should use the method that Sir Foster used on his structure and serve more than just the community, but serve the environment. When a building like this is created, it should inspire other architects to start making buildings of the same sort. In that case, more buildings of this sort would be built. I am not saying older buildings should not be inspired, but I believe that a new era is here where we are experimenting with new technology. Why should this new technology be used in benefiting the environment?