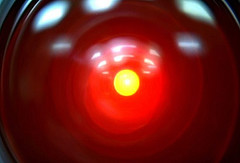 This site contains student blog posts and teaching materials related to ENG 2420 — Science Fiction, a course taught at the New York City College of Technology in Spring 2014 by Prof. Matthew K. Gold. The course focused on the genre of science fiction in literature and film. During the semester, we explored Isaac Asimov’s Caves of Steel, Philip K. Dick’s Do Androids Dream of Electric Sheep?, Ridley Scott’s Blade Runner, Octavia Butler’s Dawn, Neill Blomkamp’s District 9, Chris Marker’s La Jetée, Nalo Hopkinson’s Brown Girl In the Ring, and Stanley Kubrick’s 2001: A Space Odyssey. You can find out more about what we did by checking out the syllabus and reading through the archived blog.

The content of this site will remain available as a record of our class and a resource for others who might be interested in the topics covered. Please contact Prof. Gold if you have any questions about the course or the materials that appear on the site.

images so beautiful — nice to have time to look at them

photos made it more believable

stillness, not happening in the moment

photogaphs crystalize one moment — capture, make static, doesn’t change
why do we take photographs — to remember, memory
film — 28 fps
one photo vs. ten seconds of film

back to past, to the future

photography — has the potential to fix time

Future earth?
Toronto
core of city –
abandoned city — resources that a city should have = gone

is this a future earth?

— how do these stories imagine the city? in ruins, disorder, chaos, violence, decay

low end of the city

tales of crime taking over the city

exaggerates worst parts of cities in the 70s, 80s

in what ways does sci fi tell stories about the present through the figure of the future?

race / culture doesn’t disappear in the future! isn’t a magical erasure of race/culture/tradition in the future as we see in so many standard sci-fi tales.

diaspora – spreading of a group of people

why do we read/like sci-fi?

let’s us go to different place, from comfortable place

shows incredible potential technology we haven’t invented yet, then shows you how it will kill you

we feel powerless and limited by bodily, technological, temporal aspects of our lives; sci-fi gives us fantasy of world where we have control over such things

— yet also disrupts those fantasies — not utopian

This paper will examine the ways that Dawn and Brown Girl In the Ring treat the theme of violence. I will argue that the violence in Dawn, though biological rather than physical, does greater damage to characters in the text than the violence we see in BGITR.

start w/aliens as grotesque — find sympathy for them

hinted at other movies in sci-fi genre. These aliens not necessarily more advanced – helpless
beg of movie – inversion

how media affects our views of things

how do you symbolize filth? cockroaches — correlate w/Nazi, slavery in Am — characterize Jews as dirty

cat food – crack cocaine.
hinting at drugs being pushed into black communities after black power 70s.
minds messed up b/c of cat food

the “Other” — or “othering”
liminal / liminality –
hybridity

compare wikus in district 9 w/Lilith in Dawn
reject that part of themselves
rebel
where do they start, where do they go – wikus trying to chop off arm

do these characters become more human through their transformations/melding w/other species?

How do each of the characters grow:
Wikus –
Lilith

but in each film, a human being becomes mixed with the aliens

style – documentary style, cinema verite
believable/belief
— amount of times Wikus says to shut off camera
— suggests that there will be a sanitized version of this film that will be shown to public

Question at the end of the movie – what will Christopher Johnson do if he comes back?

opening paragraph / thesis
In this paper, I will argue that
* it should be not overly general
* it should mention the texts you will examining
* ask the “so what?” question and push the thesis one step further

When I went fishing on a boat, I caught a salmon.

make sure that you use quotations in your papers

Never leave a quotation standing alone in a sentence; always introduce it with a short phrase. Ex.: Not “QUOTE.” but As Dekard says, “QUOTE” (56).

how do humans come off in this book?

oankali — cf. imperialism/colonialism
look how dangerous these native people are
oankali not as pure as hey would like to think

HAVE A GREAT BREAK!!!

In-Class Writing:
Reflect on one of the following themes in Octavia Butler’s Dawn:

Time
— Oankali understanding of time vs. Lilith understanding of time
O: have a grand scheme — don’t know how long i will take
— patience — much more than humans
— time = elusive
— no real sense of time
— being on ship — lose track of 24 hour day/night cycle
L: her own lifetime

why do they seem to have an infinite amount of time?
— different life span?

— Oankali destroying ruins
oankali want to control future of humankind, which means controlling the past
–destroying ruins, destroying human culture in general
why do we want to save animals from extinction? how do we do it?
— guilt
— ecosystems — adaptations/change

why destroy our ruins?
— maybe not trying to dominate us, but trying to free us from obsession with cultivating our own traditions/past models — b/c those traditions/models brought you to another end
— cf. intelligence + hierarchical

Self interest/preservation as a central part of species survival
— cf. conserve rain forests b/c we don’t know everything about them yet — save both for earth and for planet. but if big pharma gets

robots growing past what they were designed for — learning more

seems like the androids are more organic than mechanical

humans had a fear of going extinct
—

human fear of unfamiliarity
— look different
— sexes – male/female/Ooloi
— sensory organs
— sensory organs — things that allows them to see also allows can kill you
— interact w/environment in different ways
— humans fear motives of Oankali, what will happen when they are modified
— in process of stopping the extinction of humanity, they are modifying humans to not be human any more

Octavia Butler: “[my books] are stories of power [. . .] I bring together multi-racial groups of men and women who must cope with one another’s differences as well as with new, no necessarily controllable abilities within themselves.”

power
humans dealing with a species that has more power

Science/experiment
— cf. Oankali treat Lily as we (in our current moment) treat animals
— make decisions for them
— cf. do androids dream –> giving L. offer to kill herself
— Lilith — role — teaching other humans —
— making decisions that benefit her in long run — but she doesn’t understand how/why
— or humans to other human — parent/child — ex. taking a child to get a shot

spaying cats — ethical dimensions
are oankalis doing to humans what we have done to animals and to other humans?

process of radical inclusion — absorbing everything they run into — we are one peer species — we face being absorbed by them
— they don’t have areas — no gender separation, mixing, families

oankali — absorptive model, don’t see themselves as conquering species
— Lilith — feels that it is invasive
— BODY
— Lilith’s resistance — opposite of Oankali — of what they are — she is very strong, individual —

vast majority of them — mutations

Major topics
— Difference / differentiation
— Bodies — anatomy — tentacles, — alien bodies, human bodies
— Issues of power and resistance — who has power, how is power used, how are characters manipulated?
— ethics of scientific experimentation and observation — cf. treatment of animals by humans
— imprisonment
—

CLOSE READING
p. 52 “the child hesitated”
— character — touches oankali — come a long way from fear of the unknown
begins to understand imprisonment more deeply
“forest of tentacles”
— what is a forest? what is inside a forest? mystery

Group exercise in close reading:
1. Share passages
2. Focus as a group on one of the passages
3. Think about issues of meaning and language – focus on important metaphors and their meanings
4. Discuss how the passage would be different w/different language
5. Interpret the passage

1. What was your thesis sentence?

2. Reflect on your paper-writing process. What aspects of the writing process worked well for you? What was the most difficult aspect of the assignment and/or you chosen topic? What would you do differently next time?

3. Name one thing you learned while writing his paper

Next week’s assignment on course calendar

subject — what is the essay about?
thesis — what is your take on that subject?

first paragraph – end –thesis sentence. clear statement of argument of the thesis
“In this paper, I will argue that ____”

Star Trek: Next Generation – “The Measure of a Man”

Course updates, as noted via email:

1. Readings are now posted on the readings page. For next week, please prioritize reading They Say/I Say. Then choose 1 of the 2 critical readings (your choice). The biographical readings are optional. Look for the [DOWNLOAD PDF] links to find and download the readings.

2. I have written up a more formal version of the paper assignment. You can find it, along with a sample paper, on our assignments page.

3. Our course calendar has been updated.

Your paper is due at the beginning of class on 3/20. Please come to class next week with an idea of the repeated element you want to write about and some examples from our texts that showcase that moment. In class, we will discuss They Say/I Say and the two pieces of literary criticism. We will also do some workshopping of your papers, so please bring in any ideas/drafts you might have. Don’t leave the paper for the last minute!

Feel free to leave comments or to email me if you have questions.

What You Should Be Doing This Week