For my Digital Media Foundation class, we were given the assignment to record a collection of shots. The shots are then to be edited together, communicating a theme for any word of our choosing. I chose to go with the word ‘Determination’, due to how powerful the word is and how easily it reflects my everyday life through exercise, working in college, and helping my family daily. With those shots, we are to create a video movie of around 5 minutes, communication the theme of the chosen word. Below is a final result of the youtube video I created with these, and below the video is the entire step process creating it. Please watch and enjoy my video. 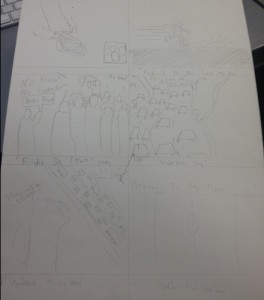 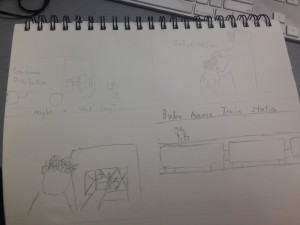 During my preproduction process, I knew right away that I wanted my word to be determination. In my own head, the word represents my push to complete my personal quest towards achieving a college degree. But I wasn’t exactly sure how I should collect a series of shots, I did not know what to record. So in order to get some ideas, I had created a mind map. 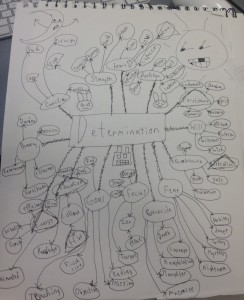 With all the words that branch out of determination from my head, I knew right away exactly what I should be recording. As shown on storyboard A, I wanted to the start the video of me getting ready to go for my daily work out. I wanted to record me tying my shoes from the ground angle, with another shot of me drinking raw eggs. For the next part, I had planned to record me doing the jogging and to add the ‘Push it to the Limit‘ song from the movie Scarface to compliment my push to workout.

For the next part shown on storyboard A, I wanted to cut my jogging to a video I recorded of Verizon Wireless workers protesting against their wages, adding the ‘Fight the Power‘ song by Public Enemy. With that, I wanted to cut off to a shot of me dealing with crossing a highway, a common situation that happens to me when I want to get to the Bay Plaza Mall. It was going to be of me commenting how the highway is, and how comfortable I am with crossing it. Ending  storyboard A of me entering the mall and adding an ‘Item Find’ tune from The Legend of Zelda series.

For the second half of the video, shown on storyboard B. I wanted to show the determination expressed by my mother and father. I wanted to put a fast-paced ‘work beat song’ during my father collection of shots, to compliment him working hard in his day to day job. For the next section, I wanted to record my mother restoring an abandoned doll, a hobby she loves to do for herself and her friends. For the end of my video, I wanted to record me working on a class project for my Graphic Principles class and ending with a fade out of me taking the train to school.

There were many challenges I had trying to get these shots. One of them was not enjoying the way I looked when I was drinking the raw eggs, the lighting and the angle came out wrong by the time I saw the clips on a computer. The other big challenge was that my mother did her sewing of the doll when I was at school, so I wasn’t there to record her sewing the doll’s dress. The biggest challenge was getting the time to get a friend to record me taking the train to school from across the train station, my full-time college schedule just didn’t work with others.

While I was editing, I had made all kinds of changes and played a lot with the editing software. I had removed a lot of video shots of me jogging. I felt all the jogging was getting too repetitive and boring, so I thought what would be neat is to make the start of the video with me getting ready to jog, throughout the video of me jogging more, and then ending the video with me jogging. I decided to add me getting coffee for fun, just to add the spice of different shots and angles in.

Originally I wanted most of the video of me jogging and crossing the highway, with a lot of commentary about me and the reasons I cross the highway. But those video shorts turned out to be too long and boring, I wanted my final video to have a bit more energy then what I had to say. I also had a collection of shots of me crossing the highway back towards home, but the recordings were too dark and once again, too boring. But even with all those cut outs, the videos ended up being over 7 minutes long. So with editing and speed up tools, I was able to trim it down to 5 minutes without anything lasting too long.

The recording of me working on homework felt a bit too random for me. Sure it may be the most determined action that I do in a daily routine towards my end goal for the college degree. But it looked a bit too silly to have all these shots of me doing a workout, just to cut to me doing arts and craft for a moment. But in the end, I was happy with the video I made and plan to do a lot more video editing in my future.