During my classes field trip to the Society of Illustrators, I was observing all the creative illustrations all around the walls of the second and third floor. We were given the assignment to write about the illustrations that fascinate us the most.

Task 1 – “Write about an exhibit, artist, or specific work of art that exemplifies illustration as communications design.” 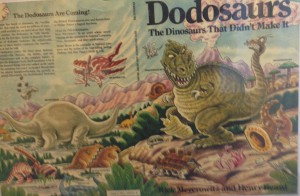 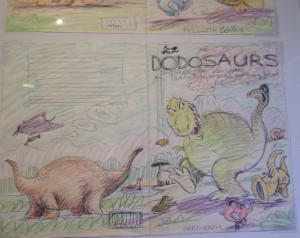 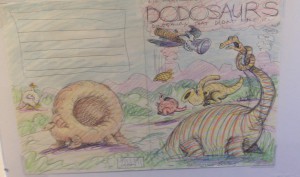 Dodosaurs, The Dinosaurs that didn’t make it by Rick Meyerowitz and Henry Beard. This work communicates how imaginative and wild an artist’s mind can get creatively, even the creator himself writing ‘You have to be mad to do this job.’  It’s as if the creator is communicating to open your mind, to be adventurous with your creativity, and you might be able to make some pretty interesting stuff. The art is showing some twisted humor, but knowing that these impossible dinosaurs did not exist at all, with the usage of color pencil, makes it more of a kid friendly art than a horror show.  Judging from these pictures and the other interesting art I saw in the art museum, Illustration seems to really let the creative mind go into amazing possibilities and free to let out the imagination.  The typography integrated makes the art piece that much funnier, without the word ‘Dodosaurs’ on top, you’d just call these Dinosaurs and keep it moving, but Dodosaurs just makes it that much funnier. I noticed that the artist used ‘Dodo’, an interesting nod to the extinct flightless dodo bird. Overall this was a very interesting piece.

Task 2 – Write about an exhibit, artist, or specific work of art that serves as a goof example of illustration as storytelling. 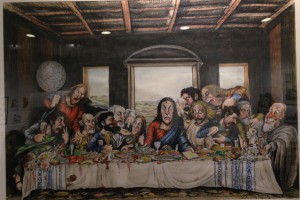 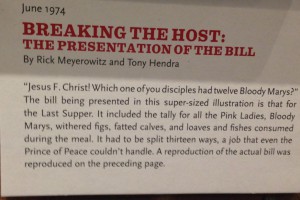 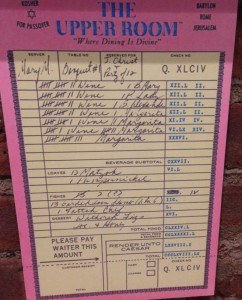 Breaking the Host, The Presentation of the Bill, by Rick Meyerowitz and Tony Hendra.  The Story being illustrated seems to be the shock in Jesus’s face when receiving the ‘Bill’ for the ‘The Last Super’. A parody to the famous art piece known as ‘The Last Supper’  by Leonardo da Vinci, one of the most famous paintings in the world.  Jesus’s followers all seem to be arguing and/or counting coins, probably because they didn’t expect the bill to be so high. Along with Judas, the guy that betrays Jesus, having a funny smug look on his face, the attention to detail is done amazingly well by the artists . The way the characters are dress seems to point the time period being around thousands of years ago, along with it having Jesus himself which points his birthday to be at least 6 B.C. Below the piece, is a picture of the bill close up, visually showing how huge the bill looks. The text used is to further show it’s a bill that Jesus is holding, telling him that he has to pay the waiter a significant amount in roman numeral numbers. Just further showing the paintings wacky humorous nature along with using roman numeral text, fitting for the it’s suggested time period. Overall this was the most humorous piece.

Side Note: Both Breaking the Host and Dodosaurs are credited to the same person, though each was calibrated with another creator. 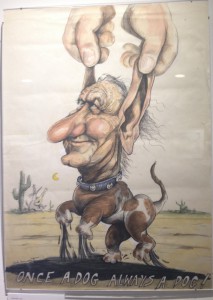 A common overarching theme that the museum presented was political satire. This one in particular done by Lyndon Johnson. A politician’s head is drawn on top of the body of a dog, stuck in a puddle of tar, held by the ears of a higher being that I can only assume is the government or ‘Big Brother’.  There’s text stating ‘Once Dog Always A Dog’, meaning once you join working for the government, you will always be working for them. It is a common theme within the political satire in the museum seems to be drawing a politician’s face on top of animals. The pictures placed below are more art pieces that I found fitting this theme, these were placed on the top floor towards the left side from the entrance. 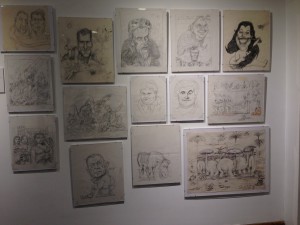 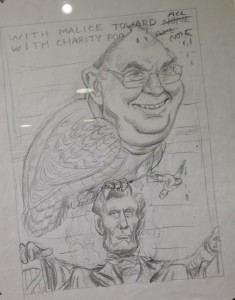 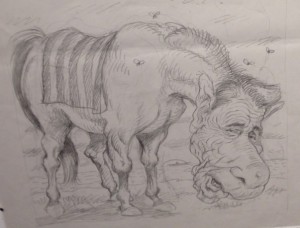 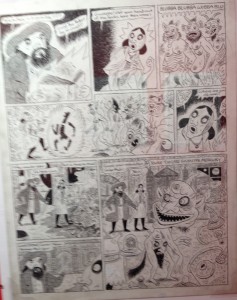 This picture in particular done by Chris Wright.

Shock was a theme found  at the museum, most of it was on the-the second floor by all the comics, but there were a few on the top floor as well. It’s interesting how the shock pictures seem to focus on drawing things that made the typical human being feel uneasy, such as dirty, blood, extra body parts, expressions of fear and evil. There were other shock pictures that I’ve placed below. 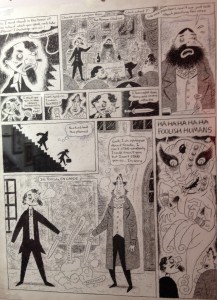 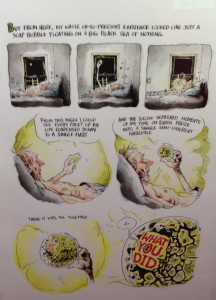 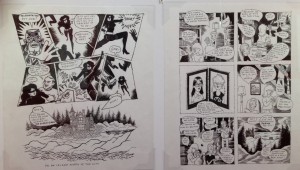 Another common theme is humor. 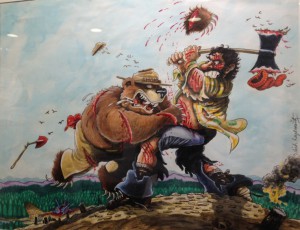 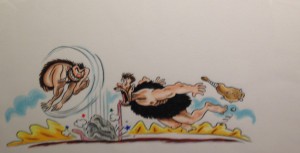 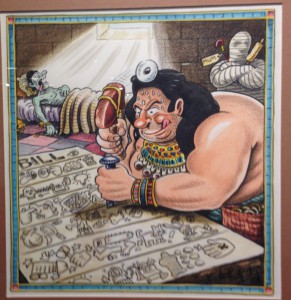 Similar to the Breaking the Host, there was a common overarching theme of humor. Most of the humorous art is on the second floor, and they tend to be drawn very close to that of a cartoon. It’s interesting the focus to expression and the stretches of facial features like the lips.