What a fantastic event the 41st Annual Literary Arts Festival was! Last Thursday afternoon, we were transported into different worlds through each others’ words, both from student award-winners and from the featured writer, Layli Long Soldier.

Thanks to all involved: the presenters, the participants, everyone who submitted writing, everyone who served as judges, the student volunteers, the hosts for the event, and the event organizers.

It would be great if anyone who participated or attended would leave a comment here to share what stood out to you, what you loved, what moved you, what the event motivated you to write, or anything else that you took away with you from the event.

Submit any genre of creative writing for a chance to read your work and other prizes. Submission information is detailed below. The submission link is here: https://openlab.citytech.cuny.edu/literaryartsfestival/submission-guidelines/

We want to hear your voice, your story, your words!

If you have a Twitter account, please consider tweeting about your experience at tonight’s Literary Arts Festival. You can use the hashtag #LAF15, or #DinawMengestu more generally, or mention our Twitter handle, @CityTechLitFest. Not yet comfortable live-tweeting? Follow along by reading the #LAF15 tweets! Let’s share with the larger community the experience of participating in the Literary Arts Festival!

Are you excited yet? This Thursday, March 26, City Tech’s annual Literary Arts Festival begins at 5:30pm in the Voorhees Theater. Check out the program for the evening below, or download a copy: 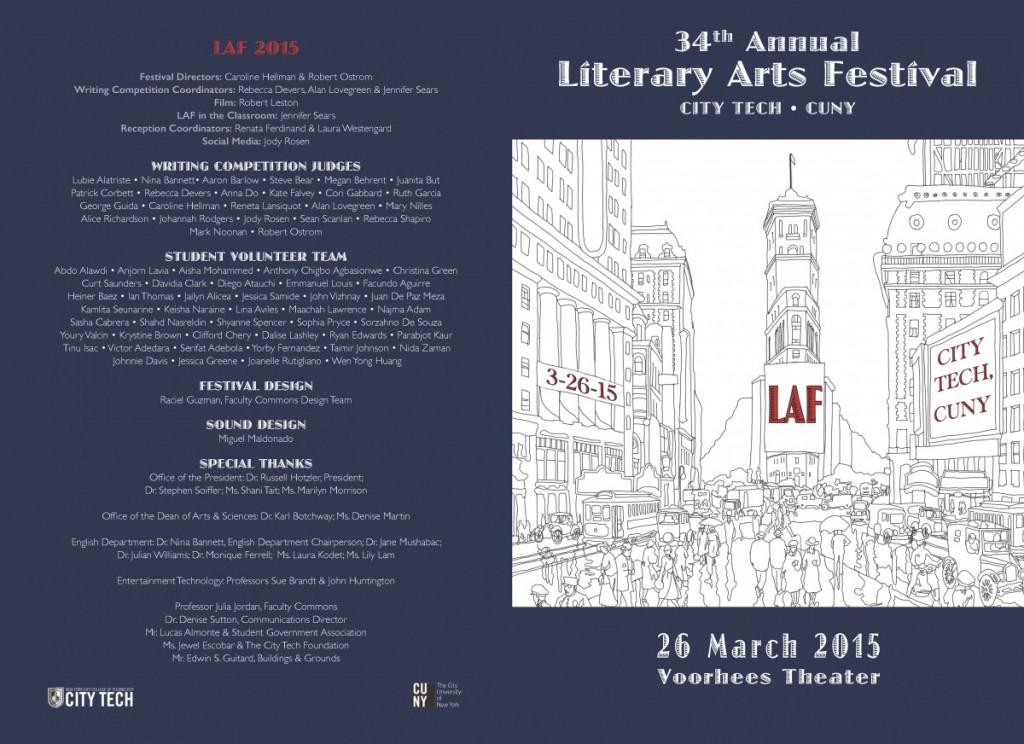 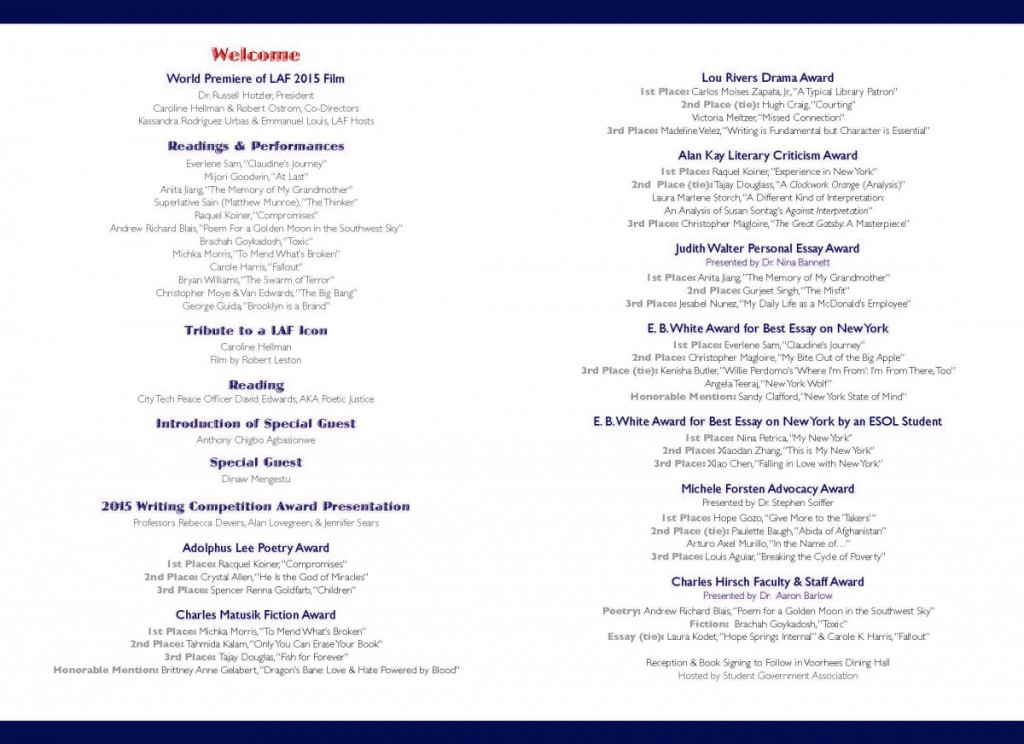 After all your brainstorming and drafting, writing and revising, today is the last day to submit that piece you’ve been polishing for the writing competition! Submissions are due by midnight tonight. Don’t forget to send your work to CityTechLAF (at) gmail (dot) com. 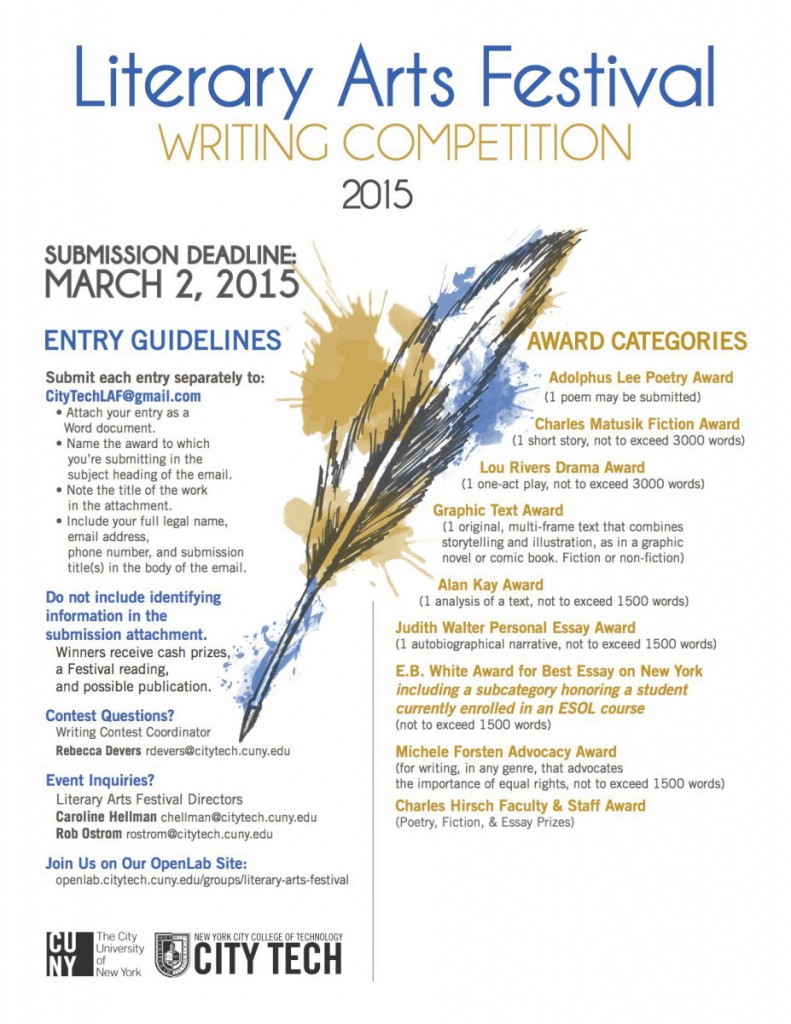 The Literary Arts Festival is quickly approaching–soon we’ll get a countdown clock for the writing competition and for the festival itself. In canse you haven’t already heard, Dinaw Mengestu will be headlining this year’s festival!

Prof. Rob Ostrem, one of the Festival Directors, shares this extensive list of Mengestu’s writing:

“The Paper Revolution” (an excerpt from All Our Names), The New Yorker

“An Honest Exit” (an excerpt How to Read the Air), The New Yorker

“All Our Names is the story of two young men who come of age during an African revolution, drawn from the safe confines of the university campus into the intensifying clamor of the streets outside. But as the line between idealism and violence becomes
increasingly blurred, the friends are driven apart—one into the deepest peril, as the movement gathers inexorable force, and the other into the safety of exile in the American Midwest. There, pretending to be an exchange student, he falls in love with a social worker and settles into small-town life. Yet this idyll is inescapably darkened by the secrets of his past: the acts he committed and the work he left unfinished. Most of all, he is haunted by the beloved friend he left behind, the charismatic leader who first guided him to revolution and then sacrificed everything to ensure his freedom.”  (Amazon)

See also the New York Times review of All Our Names, by Malcolm Jones

Book review: ‘How to Read the Air’ by Dinaw Mengestu

“A narrator provides an intimate account of his immigrant parents’ journey in the U.S.

Dinaw Mengestu’s “How to Read the Air” opens audaciously — the unnamed narrator writes of his parents with impossible intimacy. He knows what his mother thinks as she stands before a mirror a year before he is born, what she hears in the middle of the night, what she feels when his father’s breath touches her neck. This is, of course, the project of fiction — the full imagining, the stretch of empathy — but it is notable that this story is not simply told, but told by her son.

That son, Jonas, is 30, trying to understand his own failed marriage through the lens of his parents’. He follows the path of a road trip they took through America’s heartland as recent African immigrants; his story and theirs alternate chapters. Always, though, it is clear that Jonas is doing the telling.

‘This is how I like to picture him, whether it’s accurate or not,” he imagines his father. “A man standing underneath, or perhaps even across from, a row of trees in search of a home on a summer night. If he was ever happy here, and I doubt he was, it would have been on that evening, which I’ve only just now invented for him…. Regardless, history sometimes deserves a little revision, if not for the sake of the dead then at least for ourselves.’”

The Beautiful Things That Heaven Bears (2008)

“The Beautiful Things That Heaven Bears, is the debut novel of Ethiopian author Dinaw Mengestu. Published in 2007 by the Penguin Group the novel focuses on the life of Sepha Stephanos, an Ethiopian immigrant living in Washington, D.C. after fleeing his country’s revolution seventeen years earlier. Running a failing grocery store he ruminates on the past as he faces his own inward crisis of displacement and identity while simultaneously marveling at the gentrification of his neighborhood. This book took close to four years to write and Mengestu spent the better part of a year reviewing it. The original version of this novel was published in the UK as “Children of the Revolution”. The name was changed by the publishers before being published in the US because they didn’t want the book to sound political.” (Wiki)

You’ve eagerly anticipated this announcement: the date of the next Literary Arts Festival!

The 2015 Literary Arts Festival will be held on Thursday, March 26th!

Save the date! Spread the word! Tell your friends and classmates! Get ready!

Part 1: Starting and setting it up

Where are you finding your samples of Cornelius Eady’s fantastic writing? Let’s crowdsource the effort and share what we’ve found by commenting on this post. Just click above where it says how many replies there are, and add yours.