For my winery analysis assignment, I had decided to visit Paumanok Vineyards based on a recommendation from a fellow classmate. The vineyard is located in North Fork of Long Island at 1074 Main Rd. Aquebogue, N.Y. 11931. They offer different four different tour options: a free self-guided tour, a guided tour for $5 per person, a proprietor tour at $20 per person, and a VIP tour for $55 per person by appointments only. I opted for the proprietor tour at $20 per person since that had seemed to be the most informative at a reasonable price. As advertised, the proprietor tour is an in-depth guided tour of Paumanok Vineyards and winemaking facilities with one of the owners and usually runs from half an hour to an hour. In our case, our proprietor tour guide was Ursula Massoud, co owner of the 103-acre estate.

Paumanok Vineyards is a family-owned operation which is run by Ursula and Charles Massoud along with their three sons: Salim, Nabeel, and Kareem. Ursula was very helpful and informative. As the granddaughter of a vintner from the Pfalz region along the French border of southern Germany, she holds approximately 450 years of winemaking experience passed down from her maternal grandparents. Ursula and Charles have three sons who all work to maintain the vineyard. Salim Massoud works on the vineyard dealing with the day-to-day operations. Nabeel Massoud has been working on the vineyard since 2002 and manages the establishment. Kareem Massoud deals with much of the public relations as well as the winemaking that occurs on the vineyard. The three sons maintain an active online presence through social media and are vigorously engaged with the vineyard.

You can also find on YouTube (click here) and in numerous articles talk about viniculture and innovative sciences that are helping vineyards like solar panels. In 2009, solar panels came on the property. This winery’s barn is a renovated turn-of-the-century barn that houses a fermentation tank room and lab.

The spacious tasting room was built on top of the barrel cellar. An inviting deck overlooking the vineyards surrounds it. The estate only plants premium vinifera grapevines, consisting of Chardonnay, Riesling, Sauvignon Blanc, Chenin Blanc, Merlot, Cabernet Sauvignon, Cabernet Franc, and Petit Verdot. The family believes that the traditional dense planting of the vineyards at 1100 vines per acre produces more concentrated fruit and therefore higher quality wines. The wines produced at Paumanok Vineyards uses only estate-grown grapes and production is limited to fewer than 9000 cases.

Up until 1983, the vineyard was originally a potato farm until Charles and Ursula bought the farm and began to convert the land into one that was suitable for viticulture. The farm was renamed after a connotation utilized in a Walt Whitman poem, which Ursula stumbled upon during her studies of Native American culture in college. The ambiance of the vineyard evokes a feeling of intimacy, comfort, and serenity, which may be due in large part to the business being a family-owned establishment.

Throughout the tour, Ursula emphasized the importance of the soil and how vital it was to the viticulture. Due to glaciers, the soil in the North Fork region is much like that of Oregon possessing sandy qualities which make it absorbent, yet well-draining, which prevents flood pockets. That, along with the microclimate, makes it suitable for growing grapes of a European variety since it helps the soil retain heat in the winter. Since Paumanok Vineyards specializes in the Old World traditions of wine making, Ursula explains that with the change of the seasons, the cool grape growing maritime helps especially with their red wines that have many similarities to Bordeauxs during the growing and harvesting seasons. 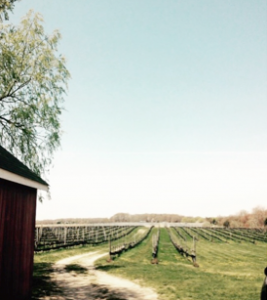 During our tour, we were able to witness an early bud break. It was explained that this was not necessarily a bad thing unless there is frost; it depends mainly on the weather. Typically a new batch will begin to grow but the quality of the grapes will moderately diminish. Their approach to agriculture relies on some handpicking along with harvesting machines, which are utilized to safely remove the grapes from their vines. During this process, harvest nets are used to protect the grapes from being poached by birds. Noble rot is not preferred but if a substantial amount occurs, then a late harvest will be done, which in result makes the grapes extra-sweet. It is also mentioned that sometimes, after the bud break stage, some vines are cut off to control the amount of grapes that are grown in order to help produce a superior batch.

The winery mainly uses stainless steel tanks in their vinification process; however, depending on the type of wine being produced, sometimes-oak barrels are also used. Prior to the expansions affording the vineyard the ability to make their own wines, the grapes were sent to an offsite location and were sent back already fermented and bottled. Presently the wine is made right on the property and no product is ever bottled right out of the oak, which helps with Paumanok’s unique clean and crisp taste. They are sure to use a hose when transferring the wine from the oak barrels so as to prevent contamination of the product. Each of these barrels run for about $800 each, and in large part due to the support of the New York restaurant market, Paumanok earns anywhere from one to five million dollars annually. Once bottled, the wines are shipped to over 500 different distributors within the Tristate area, five within Chicago, and even one in Aruba. The bottles use screw caps as opposed to corking because they believe that it keeps the wine fresher for a longer period of time. 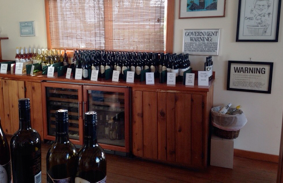 At the end of our guided tour we arrived at the tasting room. It was simple and bright, with a beautiful unobstructed view of the vines. The staff was attentive and very knowledgeable on all the wines in the portfolio.

The Semi-Dry Riesling was my favorite of their offerings; it held a golden yellow hue with fruit foreword with apple, apricot, and peach aromatics as well as on the palate and had a crisp finish. The single-block estate Reds were pretty nice, but they were in the $75/bottle price range. There was 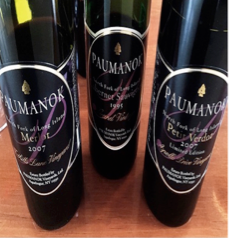 also an outdoor seating patio; the scene is absolutely gorgeous and serene when accompanied with a glass of wine. Overall the establishment is friendly, easy-going, scenic, and provides an excellent experience. The environment is a great change of pace from the city and suits those who look to get away from the hustle and bustle of the city.

Overall, the trip to the winery was educational and enjoyable. One thing for sure is that the Massoud family, one of the original twelve grape farmers of the North Fork AVA and one of the last three remaining original owners, seems to be in great and capable hands as the business continues to be passed down to invested and passionate people within the wine industry. I sincerely believe that Paumanok Vineyards has come a long way from their 1983 purchase, to their first wine production in 1989, and official debut in 1993 and will continue to be successful in the years to come. 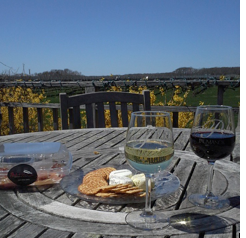 Table Wine Volume Share By Color: From 1991 to 2009 based on this graph, we can see that the U.S market has a somewhat similar favor for red or white wines, with red wine taking the lead. Presently, there seems to be less of a demand for blush colored wines. I wonder what influence this change and what made it so popular in ’91. Also, does it have anything to do with preparing people or sparking more of an interest in the darker wines as one could notice, the percentage of people who favored blush colored wines significantly dropped after 95′ and into the 2000’s we see higher interest in the red wines. Symbiotically, the interest in white wines has decreased but still remains a bit more consistent than the other colors.

The Wine We Drink in 2011: This graph shows the specific types of wine popularity in terms of the market share by sales in 2011. This graph along with the following slide that presents the “Big Three” (Chardonnay [20% market share, 23% $ share], Merlot [11% market share, 12 $$ share], Cabernet Sauvignon[10.5% market share, 14% $$ share]) in 2007 notes that the wine drinkers in the US seek familiarity and follow certain trends. The influences determined are from movies, tv and fashion icons marketing their brand/unbranded wines.