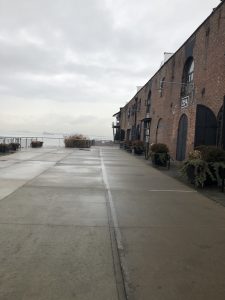 As you walked down the small alleyway that leads towards the end of a pier, you think to yourself, have I made a mistake? Well, at least that’s what I thought to myself on a cloudy Monday as I used my GPS to find the Red Hook Winery. It’s not that it is located in a shady place, It’s just a little out of the ordinary. Walking through the doors on the winery was equally as magical as standing on the pier and staring at the view. The winery was elegantly decorated with barrels, which we would later learn, were made out of repurposed barrels that had been damaged during Hurricane Sandy. The ambiance had a flair of poshness while feeling relaxed and comforting all at the same time. Perhaps the relaxed feeling was directly influenced by the warm and welcoming smiles of our host Evan Wright. As soon as we walked in, he spoke to us as if he were expecting us, which he was because we had called him a couple of days earlier.

The tour began with the introduction of the history of Red Hook Winery, its owner Mark Snyder and a brief introduction of where they source their grapes. Red Hook Winery gets their grapes from various vineyards located in two different American Viticultural Areas: The Finger Lakes and Northfork of Long Island. The Finger Lakes were “Created by the retreat of the last ice age, they function as energy batteries, both insulating the vineyards from harsh frosts during the winter and cooling them during the summer.” (Holland) As a result of the cold temperatures, similar to that of frigid mountainous Germany, The Finger Lakes sourced Riesling grapes that were ideal for winemaking. The other AVA that was mentioned was the Northfork of Long Island. “Long Island has a maritime climate and experiences cooler summers and warmer winters than the more-inland areas that surround it.” (Wine Searcher) The surrounding ocean moderate temperatures throughout the year which creates an ideal area for growing White Grapes, specifically Chardonnay. 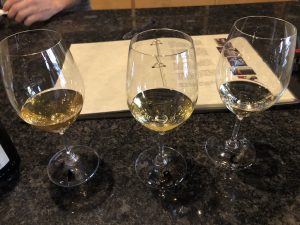 While on our tour, Mr. Wright gave us three different Chardonnays. Ea ch chardonnay was made by a distinct wine maker with their own viticultural styles. By showing us the three different products, we were able to truly appreciate the importance of the wine making itself. While the grapes may all come from the same place, they each carried their own characteristics in color, taste and aroma. The first wine he had us try was a 2014 Chardonnay made by Christopher Nicolson, then 2013 Chardonnay by Robery Foley, and finally 2015 Chardonnay by Abe Schoener. Each winemaker has their own relationship with wine which reflected beautifully in the glasses. While Christopher Nicolson’s wine was light and fruity, it was tart but smooth, easily paired with a fatty fish like herby salmon. It turns out that Christopher Nicolson is also an Alaskan fisherman during the summer. Abe Schnoener’s Chardonnay was visually a more intense straw color while still being clear, it smelled of white fruit and earthy undertones, and tasted heavier. The flavors of pear, and green apple were more pronounced but to my surprise, it also had a hint of caramel taste to it which was evidence of malolactic fermentation. Another thing I noticed was that the wine was less filtered than the others, which is a reflection of Abe Schnoener’s more relaxed and natural approach to winemaking. The final Chardonnay we tried was Robert Forley’s wine. It was a nice medium between Schnoener’s bold flavors and Nicolson’s light flavors. The color of the wine was clear and light, fruity with pear and apple scents that are present but not overwhelming. The smell of vanilla was present but only lightly. The taste of the wine was well balanced and present but not overwhelming. It would probably pair well with buttery lamb dish. Mr. Wright also let us try a Reisling which smelled of lychee. It was citrusy and bold. Surprisingly though, it was not as tart as I thought it was going to be. It ended up being on the fruitier but light and well rounded side. It was very pleasant on the palate.

We then walked through the back area where the grapes are processed into wine. It was fascinating to see how large the press actually was. It was big enough for me to stand completely straight inside of it. Mr. Wright also mentioned that one of the winemakers also processes the grapes through carbonic fermentation, also known as crushing the grapes by stepping on them.  Most of the barrels that were used to process the wine were made out of stainless steel while the barrels where the wines were stored were made out of oak. The wine is held in the barrels for up to two years. The room that holds the barrel is maintained at a temperature on average of 50 degrees. This temperature holds the grapes without it over-processing. The room is well organized and the barrels had labels to keep track of when they were stored. After the fermentation room, Wright showed us the thinking chairs, where they analyze wines while having a scenic view of the river, as well as the machine that bottles the wines. Red Hook is able to bottle up about 1,500 wines. We ended our tour in the front of the winery staring at the beautiful view of the river. Something about that view made the whole experience so much more worthwhile. I was very grateful for our tour guide for being so jovial, engaging, and always open to answer questions, he truly made this experience so much more intriguing. 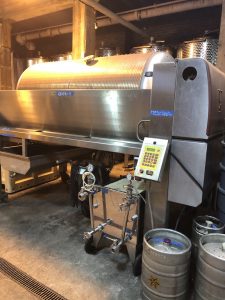 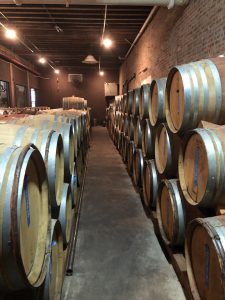 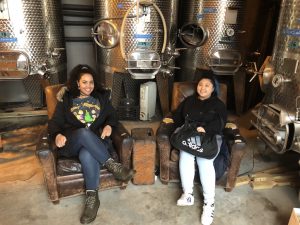 Our Story. (n.d.). Retrieved from https://www.redhookwinery.com/about.