For my winery assignment, I visited Red Hook Winery. It is located at 175 Van Dyke St. Pier 41 Suite 325A, Brooklyn, NY 11231. I called them on Saturday of November 30th at around 5:30pm, to make an appointment to visit them on Wednesday of December 4th for around 3:00pm-5:00pm. I spoke to a man on the phone, who was very polite and kind but I didn’t get his name. I went with my friend Dzifa, who has to do this same winery assignment, but she is not in the class as me. It was my first time experiencing a winery and to see in person the things that I’ve been studying in class. It was a great tour of Red Hook Winery, and I enjoyed their wines.

It was founded in 2008 by Mark Synder, who has been in the music and sound business. He has always been on the road travelling and tasting wines with other celebrities, which gave him the idea of opening his own business. Red Hook Winery is an urban winery, whose wines are produced from grape to bottle at the site, with their own signature labels. It is stated in their official website that, “From the salty, sea-breeze-blown North Fork of Long Island to the stone, shale, and winter-dominated Finger Lakes, we work with grape farmers who give agricultural definition to New York’s nascent wine growing country.” This tells you that they get 90% grapes from North Fork of Long Island, and 10% grapes from Finger Lakes. There are three wine makers of Red Hook Winery, who are Christopher Nicolson, Robert “Bob” Foley and Abraham “Abe” Schoener. They create unique expressions of these individual vineyard sites, producing wines that reflect the climate, geology, and viticulture that make New York unlike any other growing region in the world.

We went at a perfect day and time, where they were hardly anyone there, and we took our times in going through everything. When I first entered the winery, I got greeted warm and welcoming from the staff. We stated that we were New York City College of Technology students, who had to visit a winery for an assignment. They asked if we were in Professor Goodlad’s class, and told us that a few students visited before. I stated that I called on Saturday to visit on Wednesday, which a man named Vince said, “I recalled that.” That signified that he was the person who I spoke to over the phone. Vince started at Red Hook Winery in June 2019, where he was assigned as a tasting room manager. He loves his job, and would like to move in the neighbor closer to work. Vince was the one who gave us a tour, since Christopher was busy dealing with other things. Vince first lined up four wine glasses each for us to try, alongside the bottle of the wines that he poured in the glasses, before he showed us the winery room. There were four categories of wines we chose from which were; White Wine, Rose & Orange Wine, Red Wine, and Sweet Wine.

Then Vince showed us to the winery room, where the magic happens. There was the machine that presses the grapes, which was explained in class by professor. Then there was three other machines; one that cleans the bottles, fills the bottles with wine, and closes the bottles with corks along with putting labels on the bottles. After that he showed up the barrel room with about 100 barrels of wine or more, being left to age. Unfortunately, we were unable to taste wines directly from the barrels. Red Hook Winery produces about 1,500 cases a year, with 12 bottles in each case. The prices of the wines at Red Hook Winery range from $20-$50 per bottle. They usually hire people to work there in the summer. I would say that my overall experience was great, and I hope to visit a winery with actual vineyard there in the future. 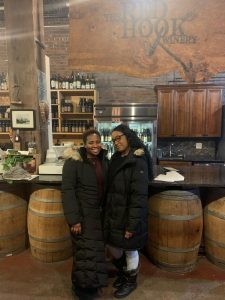 This picture shows my friend Dzifa and I at Red Hook Winery in the wine tasting room.

This picture shows the four wines I tasted in the wine tasting room.

This picture shows the barrel room at Red Hook Winery.

This picture shows the first machine that cleans the bottles.

This picture shows the second machine that fills the bottles with wine.

This picture shows the third machine, which closes the bottles with corks, and puts the labels on the bottles.