This is a video project based off the current situation we are in from the CoVid-19. The usage of Adobe Premier Pro is tricky to get the grasp on, the whole time line and keyframes gets a while to get used to. It is very similar to using Adobe After Effects, in terms on rendering. But the sounds adjustment with the gains and decibels also gets tricky, as you want all the clips to have similar frequency to them.

Overall, the work of video editing is rough, and the learning experience is steep, but there’s a lot of cool and exciting decisions one can edit to make their video crisp and clean. I personally didn’t enjoy the process of self recording myself as that was too awkward for my comfort zone.

When it comes to snack brandings there is a huge ad revenue in the advertisement industry such as Doritos. In my research of a logo, I chose Tostitos as my research. Tostitos is a tortilla chips’ brand that also sells dipping sauce. This is a brand from Frito-Lay which is in the organization of Pepsico, which Doritos is part of. “In 1965, Donald Kendall, the CEO of Pepsi-Cola, and Herman Lay, the CEO of Frito-Lay, recognized what they called “a marriage made in heaven,” a single company delivering perfectly-salty snacks served alongside the best cola on earth. Their vision led to what quickly became one of the world’s leading food and beverage companies: PepsiCo.”  To me, the operation of these food and beverage industries focuses on the appeal of nostalgia. By default, humans would associate things into categories, using these tactics the industries would create logos and their branding in similar terms to their products.

Like most branding, logos of the product often change over time. In this case of Tostitos, the logo has been redesigned four times. The first glance of the 1979 logo is very simple with the use of a modern style typeface. While the 1985 has a slightly different typeface, the unique “S” makes it more appealing. While 2003 is where the biggest shift comes. The two “T’s” in the middle have a symbolic meaning.  This alternation of the 2003’s logo concept is kept in use, even today with the sharing aspect, making it symbolic when their logo is shown.  The “I” shows a stand with dipping sauce plus a tortilla chip, and the two letters represent two people sharing. The orange and yellow are analogous colors in the background. In my opinion, the analogous color of the orange and yellow makes it appealing and warm to the consumers to purchase. Lastly, there is the 2012 to the present day design, where they removed the background and outlined their logo with white. The idea behind the present logo is that the transparent background fits better into their branding, compared to the 2003 one with the orange background.

When it comes to poster and tv ads, snack commercials normally follow a light color palette to the surroundings, such as walls and clothes. Using the lighter palette lightens the mood for the viewer, allowing the warmer color of the product to be a focal point. The food packaging and the food is brighter and in the focus frame. From the ad of 2019 , the video also includes a comedy aspect, like many food advertisements do nowadays. Throughout the video, the bag with the packaging has the logo of Tostitos throughout the whole ad, even as the actor was walking around. The angle and cleaness of the logo is bold and clear in sight for the frame. 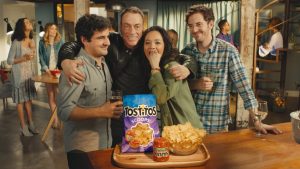 From the content of “Husky Evolution,” the aspect of rebranding the logo is important. People want their logo to represent something that relates to their products or team.  In this case of Tostitos, it is the purpose of sharing  the uniqueness of dipping sauces with the chips.

Logos have either a realist or a cartoon style to them. In Tostitos’ case it is more cartoon-like, which is unlike Guinness’ logo, which is a more realistic logo. In my opinion, the purpose of the Tostitos is to target both adults and children, while Guinness targets adults, since this is a beer company.

When it comes to dreams, I always thought they are just little fantasies people have, but hard work and dedication onto a goal or a dream does happen if you set your mind to it. This quote is a good inspiration for me to keep moving forward.

My first thought of a quote came from the day dreams I always have of designing things to make them look aesthetics appealing. This first design is used to outline the bright colors of the background with the text being colorful. This to me is to bring out the warm feeling to the viewer who can see this and think about their own dreams. 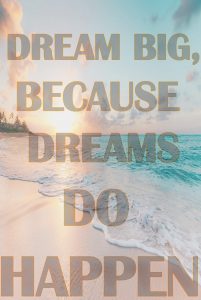 The second concept I had in mind is in a warm place like a beach when it comes to my mind, the warm sun and the calming water. I wanted to use a concept of transparent text and outline of the quote on the photograph.

Finally this is the original concept I wanted to do with a dream quote, I didn’t like this quote as much as the other one, as I find the other quote to be a catchier quote than this one in the concept / sketch part. 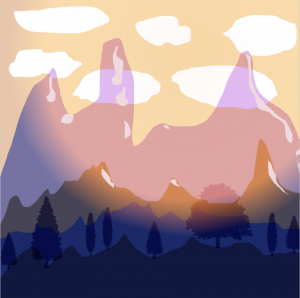 Scenery of the mountains, with the sunset with transparency of the scenery.

Inspired from the LIU’s Plant Cure Exhibition, this uses the the complementary color to brighten the green, when in reality only the background color changed. 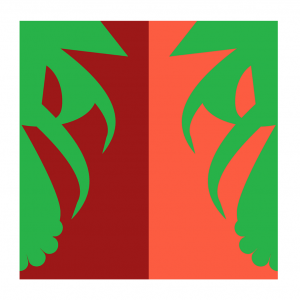 Hello, my name is Guen Fung! Welcome to my e-Portfolio on OpenLab. I am a sophomore at New York City College of Technology, in the Communication Design program. My pursuit for this major is into typography and animations. It is important to me to have a diverse and creative mindset for designing and contributing in today’s society.

At a young age, cartoons were a big inspiration to me. That was how I learned my English while in a Chinese household. Often in the cartoons, they have beautiful typography and the animations are great, such as the ones from Disney, they made me curious and interested in pursuing this major. My goals at City Tech are to grow as a person and develop into a professional designer.