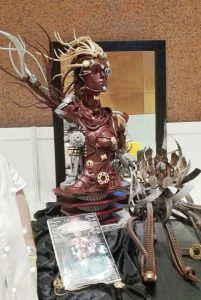 This theme of this showpiece is called Cyber Woman and created by Peter Gyorgyicsek. The main component of this showpiece is chocolate; the creator used 54.5%, 67% and 72% chocolate to create this piece.  The techniques used were air brushing, cocoa butter spray, casting, molded, robot coupe and hand sculptured chocolate. The torso of the woman has been sculptured well and in detail. The Chocolate feelers from her back and hair are detailed and colored well to go with her figure. Her assembling of her insides as well as the outside has been done with care. She is well put together. The color of the chocolate and the colors used work well with the theme of the piece and complement each other. There is no sugar used I think as per what I can see in the picture. The surviving temperature of this showpiece is 68°F. If I was constructing this piece the intricate detailing of the work would take me very long to master as well as the correct airbrush colors. I loved the whole look of the piece the attention to detail of the woman as well as the gears and the feelers and the machine effect of the inside of her body. Pastry Chef Peter Gyorgyicsek is a Hungarian pastry chef and has his showpieces featured in various shows. He earned a gold medal at the IKA Culinary Olympics for a stunning sugar showpiece. The Chocolate Cyber Women piece took him 2 months to complete and another 4 hours constructing the showpiece, and earned him gold at the Culinaire Malaysia 2015. 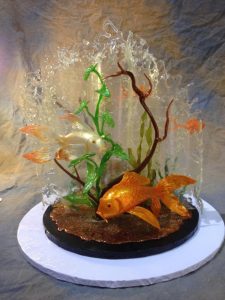 The theme of this showpiece is a Koi Pond. The main component of this showpiece is made of sugar. The piece looks liked stained glass, it is amazing how the creator was able to make the background look like clear water; it was this particular feature that attracted me to this piece. The koi are sculpted wonderfully, on looking closely to the piece the fins of the white koi are beautifully shaded and detailed. The piece was made with isomalt sugar, poured and pulled sugar. The fish are made with blowing sugar and the piece sits on a thick cardboard base. The seaweed and plant is hand pulled sugar. The piece has a beautiful combination of colors, especially the green, brown, greenish gold; I think the base could have been a different color, but it is still eye catching. Constructing a piece like this, blowing sugar to make the fish could be a problem for me, but if I did I would consider trying to change the color of the base to a blue. There is not much mentioned on the chef who created this piece just his name The-Evil-Plankton. 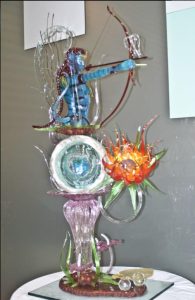 The theme of this showpiece is a scene from the movie Avatar. The Blue Navi figure I think would be made of molding chocolate or cast sugar holding a bow and arrow which looks like pulled sugar on top of beautifully bluish green round shape made from isomalt which is placed on top of a figure representing the tree of souls made with pulled sugar the colors used have a soothing, purple-hued glow. The bright yellowish orange red flower brings a bust of extra bright glow color to the pieces. The technical problems I would come across I think would be the shape of the bow and arrow and pulling the perfect shape for the torso of the navi. I find the pieces beautiful. It’s like a journey through the world of Pandora. 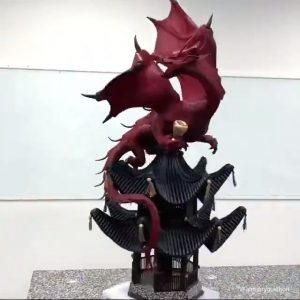 The showpiece is a chocolate dragon made by Chef Amaury Guichon. The piece is completely made by milk and dark chocolate and the chef uses various techniques, textures, molds, tools and tricks to make the showpieces. The video I saw shows how he builds the piece from the base up to the dragon. The chef used air brush colors to distinguish the various pieces on the structure. He has used limited colors like red for the dragon, black and gold for the main structure and black and white nibs mixed with silver color to make a marble base. I would love to construct a piece like this and with practice I am sure would one day be able to do so. Chef Amaury is a world-renowned pastry chef. He reached executive chef level at the age of 21 at Hugo and Victor in Paris, France. He has constructed various beautiful and detailed structures. He opened a Pastry Academy in Las Vegas, NV.

Its all about embracing the process. Remember that, when sugar crumbles and frustration creeps in.