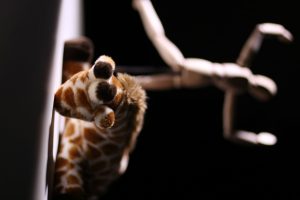 (don’t know why it uploaded in landscape orientation)
I chose this image because of what I captured in the bokeh- Jill, distraught, when Jack falls down. This was on a 30d at 200mm, so I was naturally across the whole classroom waiting for people to not pass in front of my line of view, to take this photo. 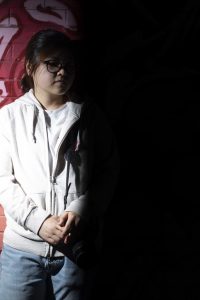 Normally, I wouldn’t publish a photo like this because it exhibits the use of banding, which is usually never a good thing, but I wanted to use banding to my advantage. Here, I placed my subject to the left of the frame and bumped up my shutter speed to 1/400; the faster my shutter, the more banding there is, the slower the shutter the less banding (and at less than 1/200 for a lot of cameras, no banding due to sync speed). I felt like I got what I wanted, someone to glance a little into the darkness late at night while appearing that they are standing next to a lamp, albeit a bright lamp. 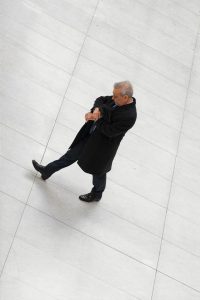 I chose this image because I was right in the Oculus when I shot it; I didn’t bring the 70-200 this day or even my own camera; I used a 30D and brought my 85. I was still able to isolate this man at equivalent 130mm, and I tilted the camera off axis to help display his sense of urgency that he conveyed by looking at his watch. 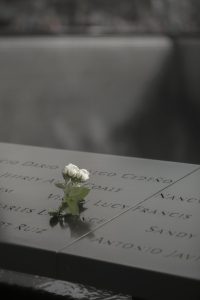 I chose this image because of how it felt, emotionally- I also edited it accordingly to mute the tones and almost completely gray out the background. I was also lying down on a bench far away from this flower @200mm when I took this, because I wanted the bokeh; the camera is also angled upwards and not completely straight.
Properties: 2.8, 1/1600, ISO100. @200mm. 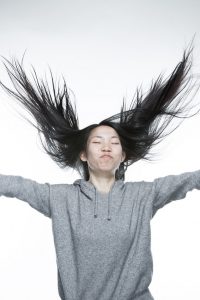 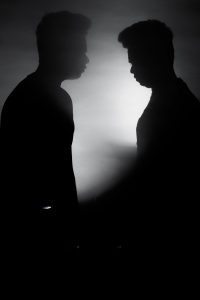 This day was tough, because I brought my own heavy gear and decided to tether my camera to my phone via wi-fi; I popped a very bright 360 w/s flash and potentially messed up other student’s photos in the process, because of the sheer power I was using. Even at 1/128, I get the light output of a speedlite @1/2ish. It was very blinding to me but I enjoyed it because of this photo- described earlier as someone who is struggling with their conscience, but I also chose it because I showed it to one of my students and they were telling me about how one of my clones was skinnier than the other. 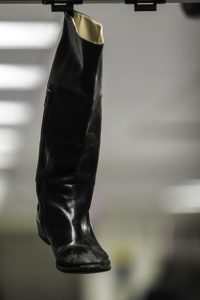 This was the best photo I’ve taken that specific day (2/8).
Properties: 30D, F2.8, 1/200, ISO1000, 70-200 2.8 @200mm.
The reason why I chose this image is not necessarily because of the bokeh this photo has (and it’s been a while since I’ve seen the bokeh using this lens on a crop camera) but I chose this image because of the sheer amount of trouble I went through putting this shoe on a door hinge in Voorhees lunchroom, and the amount of people looking at me while I did that. 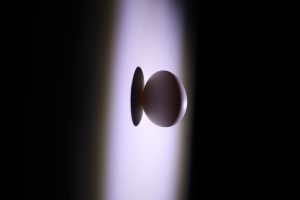 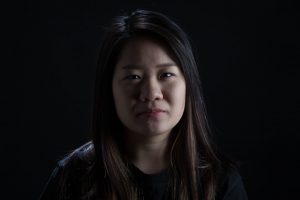 I like this photo, the contrast between light and dark accentuates her features. The subtle light hits her from one side of the face, while darkening the other side giving it depth.

In the photo taken by Robert Polidori, the subject matter of these photographs is religion; Christianity and Catholicism. The subject is presented frame by frame, it includes architectural elements like arches and windows. The crucifixion  of Jesus is presented throughout the frames, there are many halos and open doors as if the message intended to say that these doors throughout the frames, are the doors to Christ. The rule of thirds is presented in this picture with the use of doors and windows. The contrast emphasizes the light shined upon the Christ, giving it a holy feel.

The subject of the exhibit consists of mainly falling water that is black and white water or water rushing towards the surface in color. The images follow a theme, of either water just falling or rushing to the surface. The contrast used in the black and white photos make the waterfall itself stand out from the land around it. The colored photos attracts your eyes to the bubbles and water rushing up. Ne similarity that all images had. Were like it was taken from eye level view, that would also make the viewer feel as if they’re watching the waterfall in person themselves. Boomoon wanted the water to be the center of attention.

The subject consists of people in a blackout in New York City. The candle in the photo makes great contrast between light and dark. You first notice the light coming from the candle, but then there is another light source in the room, and that is the iPhone. The candle light in the darkness gives it a dramatic feel. The photographer took this photo in bird’s eye view. Giving you the idea that this person is trapped in an elevator, with only a candle, a phone and grocery. The exabit consists of different situations people would be in during a blackout, such as getting stuck in an elevator or sitting in front of a museum, or a robbery starts to happen. The message intended is to say if there was a blackout, there would-be chaos.