This is a link to my guest post on Isatu’s blog:

Another key piece of equipment is a stabilizer. Stabilizers allow more the filmer to move more freely while skating and filming without worrying about too much shaking. A stabilizer also allows the filmer to hold a camera in one hand with all the weight centered into the stabilizer and one grip. The only time you dont need a stabilizer is when your using a video camcorder that already has a handle bar on top of the camera. like a Sony VX 1000 or 2000. A stabilizer is needed to hold a DSLR or a Go Pro nice and steady. The stabilizer not only helps smooth the video and makes holding the camera easier, the stabilizer allows for a microphone, light or both at the same time as attachments to the camera. 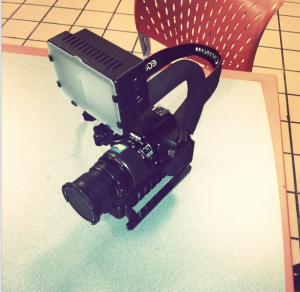 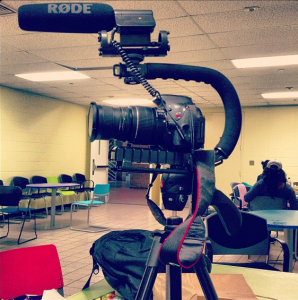 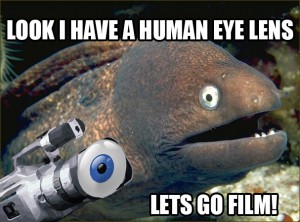 A fisheye lens is a type of lens that increases the angle of viewing. Which means you can see a lot more in the picture with a fisheye lens than a regular lens. This is very important when filming skateboarding. While a fisheye lens is not needed 100% of the filming. It is needed when a filmer needs to get close to the skater when filming the skater’s line. A line is a series of tricks done one after the other so for example a skater might start with a kickflip onto a 50-50 ledge 180 out. A fisheye lens will allow the filmer to get nice and close to the skater while he/she is skating their line and capture the obstacle plus the ride away as well: 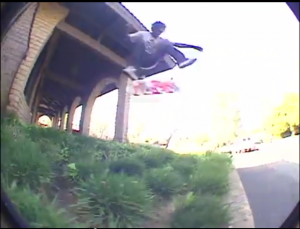 As you can see here Cyril Jackson is frontside flipping this bank gap. A fisheye lens is used here and it is obvious because of the wide angle of viewing and the “circle” like edges. As I mentioned before because of the fisheye lens you are able to see the skater’s trick, the whole obstacle, and the ride away at the bottom of the frame.

Now that I’ve told you what a fisheye lens is, IN GREAT DETAIL I’ll now show you posers your options. If you buy a Canon DSLR your options are fisheye lenses that will start from $700+ to $1000+.

If you buy a Nikon DSLR your options for a fisheye lens are just as expensive :(.

BUT THERE IS A HOPE! Theres no need to wallow in misery. Instead of a dedicated lens you can buy a screw mount lens which screws on top such as the Opteka Fisheye Lens. It screws right on top of the lens thats already mounted onto the camera. 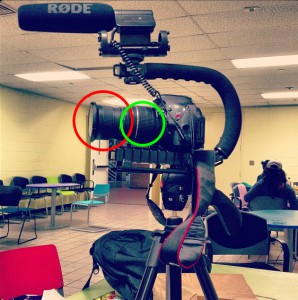 The red circle is the fisheye attachment screw on lens and the green circle is a dedicated lens to the camera.

Okay homies! hope you watched the intro my series about equipment. I had to break it down into different posts because I cant explain a bajillion amount of info in just one post. It took me 8 min of a video just to show and explain what I have in my camera bag. This post will primarily talk about cameras mostly DSLR cameras because of my experience.

First my camera :D: Canon T3i the link is a normal retail price brand new. You will find this same price at bestbuy, b&h, and other photography dedicated departments. Of course you can get it cheaper buying it used  but its better buy it brand new unless when you buy it used or refurbished, it comes with some kind of warranty. Like I said in the video its a great camera to start with because of its price for what its worth and its ease of learning as well.

NIKON D5200: The video Quality on this bad boy is GREAT. I like it a little more than my own because it gives more of a movie feel when filming than my own camera. Again just as the T3i this is also a great camera to start with for beginners as well.

Go Pro: The Go Pro cameras (they have different versions at different prices) are great cameras for filming action such as skateboarding. I suggest between the least expensive and most expensive its good to get the one in the The Go Pro Silver Edition. The most cheapest of all cameras that I’ve used and introduced to you today.

This image shows a perfect example of how close a filmer should be when filming a rider doing the trick when using a fisheye lens. Remember a fisheye lens is used primarily so that the whole body of the skater is in the frame and the obstacle that he/she is skating. when using a traditional lens the filmer will have to be much farther away in order to capture the obstacle and the skater and because the he/she is father away from the skater, the skater will look small in the frame from being so far away from the camera.

This picture also shows how close a filmer has to be in order to frame the skater and the obstacle, due to the filmer being so close it means they are also in danger. A skater doesnt always hit the spot clean the first time, sometime never until the 10th time. The board can fly straight into the filmer and hit the filmer OR WORSE hit the camera! :O

With this series, I will point out my opinion on different equipment filmers can use in order to make the most steeziest of videos. Just to let you know I will only be covering equipment on the small budget side. I really dont want to go over expensive equipment because reviewing the equipment will mean I’d have to buy more equipment. Theres a reason why I like the small budget, I’m broke!

In the above video I will introduce my equipment. I will go over extensive detail about what I carry with me on a daily basis when filming with the homies.

Now I am not saying what I have is the best equipment for anybody but it can work very well anybody, especially new filmers. 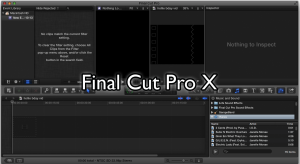 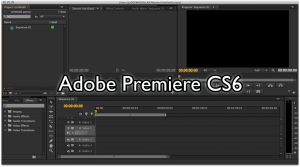 When it comes time to edit your clips together into your grand masterpiece, you will need the right software. There are pages and pages of different video editing software that you can use to make a final piece. No I will not be reviewing windows media player…I will be reviewing software Adobe Premiere CS6 [PCS6] & Final Cut Pro X [FCP X]. I have both programs and have used both programs to edit videos. If you guys are wondering how to get these programs, it is pretty simple, I am not going to promote any certain way of getting these programs for anyone, just sayings its not hard to get them.

Final Cut Pro X is the latest version for the famous video editing software. It is used by professionals for many types of projects including high end movies as well. It is only available for Apple Macs.

Adobe Premiere CS6 is not the latest version as CC is the latest version, but they came out relatively the same time. It is available for both PC’s and Macs. This program is also used by professional video editors.

When comparing the two programs I first compared them on how easily it was to grasp the basics of the program from just looking around and playing around with the tools. When I started learning video editing, I started learning Premiere CS5 and FCP 7. I started using them at the same time but gradually moved to Premiere because of its availability on both OSs. Also I found that navigating through Premiere was much easier for myself rather than FCP. When I bought my own Mac laptop I got the FCP X program after Premiere CS6. Moving from CS5 to CS6 was easy and loved it but when I moved from FCP 7 to FCP X the whole layout is completely different which throws off my understanding of the program. Premiere CS6 is also easier to encode many different kinds of videos outputs and gives you the access to make your own custom encoding output. FCP X has different encoding outputs but it is very limited when compared to PCS6.

Overall in my experience in editing I found PCS6 much more better than FCP X.

Alright guys, just to ease you guys into the blog and into getting to know me as well which is a plus :D. In this video I tell you about the blog and everything that I will post in it. If you have any questions about the blog and me, it’ll probably be answered here in the vid above.

I tried skateboarding a couple of times in my younger days, never really got the hang of it though. However, there are many other options than getting around New York City on a skateboard. I usually ride my fixed gear bicycle (fixie) to work or just around the city on adventures. Although many people do not film fixie riders I have been around some of my friends that ride BMX style bikes that do get filmed. It is usually difficult for the person who is filming the tricks of the BMX rider or the skateboarded. Some of the difficulties of filming that usually are recurring is the lighting of the outside or inside space. Graphene is opening the door to better low-light photos in the form of an image sensor that can catch light 1,000 times better than traditional sensors. Oh, and it uses 10 times less energy, too.

To think that we have affordable digital cinema cameras in the present day that blow away the digital cameras that were being used in Hollywood eight years ago is bordering on absurd. Not only that, but technology is progressing at such a rate that everything is nearly outdated the moment it hits the market. According to Gizmag, scientists at Nanyang Technical University in Singapore have been working on a new graphene-based sensor which, they say, will be upwards of 1000 times more sensitive to light than existing CMOS (complementary metal–oxide–semiconductor) and CCD (charge-coupled device) sensors.

By trapping and holding light-generated electron particles for far longer than most sensors, the graphene version can take much clearer pictures with much less light. So it has the potential to be used in any type of camera including infrared cameras, traffic speeding cameras, and satellite imaging, to name just a few. What do you guys think? Are graphene-sensors the technology of the future? Will they open up some new creative medium? Are they even necessary now that we have cameras that are already fantastic in low light?

If you guys are interested in learning more about graphene check out my blog.