The name of my disease was Contagion. The first time around I chose Russia. I figured it was a large enough country and I was curious to see what happened. In the first game, I didn’t really know how to play as I was getting acquainted with the game and how it worked. After I figured out what everything did, I killed everything on earth in about a little over a year. The first thing I chose was insects and then I played around with a few other vectors to see how fast everything would go and try to make my bacteria spread faster. Once I got to birds and airborne forms of transmission it went a little faster.

The second country I chose was India, and while disease spread a lot faster  this time, I was not able to kill off the world. I chose a more difficult level because I thought I  already knew what to do.  Initially I diversified my ways of transmission, and then I went for the abilities of the DNA, changing its strength like resistance to antibiotics, and the ability to thrive in certain temperatures, however I wasn’t able to get Greenland! I honestly wasn’t paying attention to how long it took to infect the first 100 but it happened very quickly. Once you added water transmission and means of transmission through sweat, or sneezing, and coughing in a very populated area, it went very fast.

This game definitely helped me to understand pandemic transmission a lot better. There was definitely a difference between the different types of transmissions and how quickly they spread in relation to the population. It was also interesting to see how the bacteria mutated on its own. Another thing that slowed down transmission was when they stopped transportation.  This game made me really pay attention to the things we do on a daily basis, and it even made me think about the Ebola virus and what was happening when it hit the United States. Unfortunately this game is a little addicting but it was fun and educational at the same time.

As I was already familiar with these images from class and what they were meant to be seen as or rather what they were used for, I found Carrie Mae Weems appropriation of these images to be transformational.  I think she transformed them to tell a story and humanize the people in them.  When I saw them in class, we discussed them in a scientific way. We all agreed that the subjects were slaves and specimens  studied due to the way the pictures were taken.  While we all are aware of the abuse that slaves had to endure, these same pictures didn’t really convey that, without the text she added. She made a clear distinction, with the titles she gave each image. She added a depth and gave these same images a totally different meaning, adding a different element and a different dimension.  She showed how in this same scientific study that seemed harmless, because the point of taking the photos was to prove a theory, these photos were derogatory in their own right. She removes the scientific element in her collection. Their posture, their expressions, the image themselves; showing them with their masters and families paints an entirely different picture with the added text.

I found it difficult to read the text and look at the images at the same time. I had to look at the collection a few times. The first time I tried to do both but I couldn’t connect the two. I had to read the text first and then analyze the image, to kind of interpret what she was trying to convey. I think that was because I was familiar with some of the images already, and because in some images so much of the text overlapped the image. I think without the text you are allowed to create your own story and assumptions about what is happening in the photos, without having an emotional connection.  She brings that emotional aspect to these images.

Personally, I liked the collection.I think it is very powerful. I think it evoked something from me that I didn’t really expect it to.  It showed me how significant text can be and how the same piece of work can be so different, with a few changes. The pictures themselves didn’t change, but she changed the color, and added text, and really made you realize what was happening during this time period. She brings an awareness and compassion to the viewer in a way that was not there before. From listening to her first, I got a sense that was what she was trying to convey, but after actually seeing them, I think she nailed it. I  think she was really able to convey that in her work, and I think I would’ve gotten that without hearing her statement first. Her work speaks for itself. 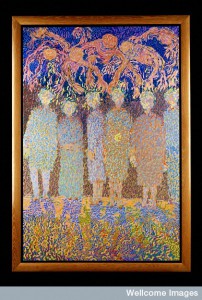 This image stood out to me because of the first top half of the image. This image is a little different than what we’ve been looking at in class so far. This is an oil painting that at first glance the images look like demons or some kind of evil spirits. The artist painted them in red which is what stuck out to me. Upon reading the title, the image made perfect sense to me. It is titled “Patients waiting to see doctor”.  These figures are suppose to represent their fears which is an awesome image to me.  The people in the image aren’t clearly drawn. There are no facial features, on any of the humans, but you can see some features on the “fears” floating above.

I think people do feel like this when they go to the doctor, which is why many people don’t visit the doctor as frequently as they should. They fear what the outcome of the experience might be. I think this image is a perfect representation of how many people feel and the anxiety they experience .