On the first try, I named my bacteria EMNY and started it off in China. The disease spread almost instantly. I kept my eye on the world news, such as a kissing festival. When that festival occurred, I would upgrade my bacteria that can spread through blood contact. I spread the bacteria mostly from upgrading the Water Transmission and Air Transmission. When the news said the ships were going to increase its resistance to bacteria, I would upgrade the Water Transmission further. My first death took a while because I did not upgrade its symptoms very much until the bacteria was spread to a few billion people. However, my first bacteria failed because I upgraded the symptoms too soon and I did not manage to infect every single person. Therefore, the bacteria died with the last person infected, and the few that were not infected with the bacteria lived.

On my second try, I named my bacteria AYNY and started it off in India. I repeated the steps from the first game except I did not upgrade any of the symptoms until I got a notification that every single living being was infected with my bacteria. When that happened, I upgraded all my symptoms to high lethality and I easily wiped out humanity in just mere minutes.

In both games, none of the countries found a cure past 30%. On the second try, the bacteria spread a lot quicker because I focused on upgrading the Transmission chart over anything else in the beginning. The game helped me understand how simply easily and quickly a deadly bacterium can spread due to so many factors, such as air, water, animal, and blood transmission. 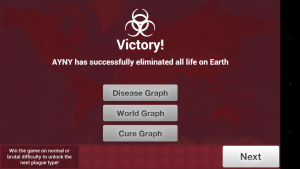 When I first viewed Carrie Mae Weems’ From Here I saw What Happened and I Cried, 1995-1996, I was not sure what to make of it. I had to listen to Weems’ statement about the series to have a better understanding of the series. I learned how she used appropriation to distant the viewers from the original photographs. She did this by putting a red glass over the images and adding frames and texts on the photographs. When I viewed the series again with a different perspective, I do see it as a film like Weems mentioned in her statement. It is as though I am looking through a film slide and I see a story going on because the sentence never really ends at the first portrait. The way the artist inserted text gives the individuals in the photograph a story, which makes them more memorable. The artist’s use of text is also interesting because it is as if we are reading what white supremest would say.  Through text, it also gives the subjects character and makes them more humanized. Weems’ photographic project is interesting because they are historical images with a twist. It makes me think of what the individuals went through and what exactly they were thinking through Weems’ appropriation tool. 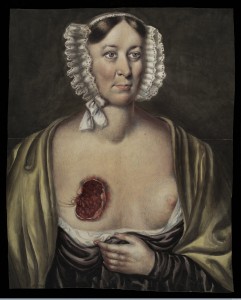 The image I chose from the Wellcome Library is called “Gentlefolk of Leeds Afflicted with Disease; Mrs. Prince, after surgical removal of a breast. Watercolour, 1841.” The painting captured my attention because of the graphic imagery of the woman’s mastectomy. From the painting, it shows a middle-aged woman, possibly in middle class society. She looks healthy based on her weight and has the red blush on her cheeks. However, the skin on her face may be covered with make-up, so we cannot be sure how healthy she really is. She is wearing a lace cap, a dark dress, and a yellow shawl. Her dress and shawl are loosened to reveal her breasts and makes the observer to focus his/her attention to them. The woman has an open wound on her right breast, with vivid details of what it is inside of it. We do not know what kind of disease she had on her breast, which required this kind of operation in the 1800s. This is like the images we saw in class because the artist must have studied in detail of the internal body, possibly seeing woman undergo the surgery or possibly at her autopsy, in order to paint this image. It also shows us that doctors did indeed do these kinds of procedures back in the 1800s on women that had diseases, tumors, or cancers on their breasts.