I’m Laticia Bourne, and I’ll be giving a step by step explanation on how to solve problem #7 on Exam #3’s review sheet, which reads:

The quarterly profits for a large company are normally distributed with  million and million.  What is the probability that the profits for the next quarter will lie between $100 million and $150 million?

The first thing that’s always best to do is pull out the information given.

In this case, we have two x’s

Before we can find the probability, we first have to find two z-scores for our two x’s. We do this by using the following equation:

We’ve already pulled out the information needed for that equation in Step 1, so now to plug those numbers in for each of our x’s:

The final step to finding the probability to our problem is to now subtract our areas:

So the answer to our problem is:

The probability that the profits for the next quarter will lie between $100 million and $150 million is .7435.

I hope my explanation was very helpful, good luck on the final everyone! 🙂

14. One tire manufacturer claims that his tires last an average of 42,000 miles with a standard deviation of 7800 miles. A random sample of 100 of his tires is taken. What is the probability that the average of these 100 tires will last greater than (to the right of) 41,000 miles?

This is a sampling means distribution question (the same as day 20’s handout.) We know this because it is stated in the question, underlined above (random sample). The question is asking for the probability of 100 tires greater than 41,000 miles, so this means that our answer has to be between 0 and 1.

Second: We find the mean(µ), n, x-bar, and standard deviation S/σ where the mean/average (µ) stated above is 42000, n is 100, S/σ also stated above is 7800 once we know these numbers we could plug them into the formulas below to solve the problem.   (formulas used included)

Third: Construct the Bell curve and map out which side of the curve we are finding the probability for. (see inserted picture). We have to find the probability to the RIGHT of the bell curve so we have to subtract 1 (one) from the x’s Z score. Why? Because the table only gives us the Z score to the left not the right. 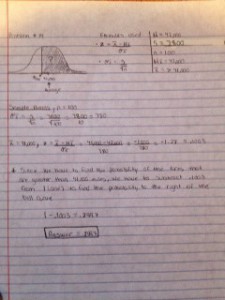 Step 1: We find the standard deviation for x-bar first because this answer is used as the denominator for the following step.

Step 2: we use the sampling distribution formula for x-bar to convert our x to z.

Step 3: We look up the Z score in the table

1. Take the Z score and switch the sign. (it will either be positive of negative so the opposite sign of whatever your Z score is)

Then we will just look up the Z score in the table and find our answer (x).

2.  Or you look up the Z score in the table to find your X and then subtract that number from 1 (one) and that would be the answer.

*Moral of the story, whichever way you feel comfortable using, you will get the same answer.

Step 5: Check back to see what the problem was asking and see if we answered it. In this case we did, so the problem is now complete.

“Normally distributed” That means that the graph of a normal distribution will be normal Bell Curve.

In this problem we know that:

A) What proportion of students will receive more than 80?

We can see that our two X’s are 60 and 90 therefore we have to apply both numbers separately to our Normal Distribution Formula.

C) If less than 60 is a failing grade, what is probability that a student fails the class

D) If only the best 10% of the grade in the class will receive A, what grade must a student obtain in order to get an A?

10%=.10 From the problem they ask if only the “BEST” from the class will receive A, we can assume that its more than our M=70 which will be located to the right of our Bell Curve

Because it’s on the right we automatically subtract 1 from .10

Hi, my name is Fatima Elmachatt,

I will be explaining how to do the problem number 23, here is the question:

A multiple-choice exam has 8 questions, and each question has 3 possible answers.If you guess the answer to each question and don’t leave any blank, what is the probability you get exactly 4 answers correct?

First: when am I am reading the problem I make sure that I read several times , to get what the question is really about and what kind of formula to use in order to solve it, so the key words for the problem are the ones I have highlighted , that reminds me of the:

Binominal Formula: The Probability of getting exactly X success in a binominal experiment with trials is:

In This case there are two possibility either I am going to guess the correct answer or the wrong one ,

Because when we give the right answer there is only one correct, when we pick other than the correct one, so there are 2 wrong ones, in this example.

Third: Now we can use our formula :

So here we are looking for the probability of getting exactly 4 answers correct, which the P(x).

The n is the number of the questions which is 8 questions.

The p is the probability of getting of getting one answer correct is (1/3)^4 , we are using the power 4 , because we want exactly 4 correct answers

I hope that I explained the problem clear enough. Please don’t hesitate to ask for more details or further explanation, I will more than happy to help.

Step 2: After listing them in order, you then add all of the numbers together:  When you have the sum of all the numbers, you divide by the amount of numbers, in this case 6, to calculate the mean.

Step3: in order to find the median, we need to see exactly which number lies in the middle of all of our data. In this case, there isn’t just one number. We now have to add both numbers that are in the middle. After we have the sum, we then divide this number by 2.

Step 4: To calculate the mode, we need to review our data and see exactly which number reoccurs. If there is no number that repeats, then there is not a mode.

I will be explaining problem # 3

Step 1: First list all the information thats given: Mean or Mu

Next step is to plug in all the values and solve for z.

For part b, we have to follow the same exact steps as part a.

#11=New York State has found that 30% of all consumer complaints are valid. If the State received 6000 complaints last year, about how many of them are expected to be valid? (i.e. find the mean). Find the standard deviation.

Step 1: The first thing you want to do is to find n,p,q. n and p are given in the problem where n is the sample population and p is the probability. you find q by subtracting 1 (represents 100-%) from .3.

Step 2: Now you can find the mean by using this formula-

Step 3: Finally we can find the standard deviation by using the formula below.

8. The finishing times for a long-distance race are normally distributed, with an average finishing time of 3.25 hours and a standard deviation of 0.5 hours. If bob is running this race, what time does he need to finish in order to beat 75% of the other participants?

Step 1: You first have to write down the variables that is mentioned in the problem.
Mean: 3.25
Standard Deviation: 0.5

In order to find the Z score, we use the Z formula that we learned in class:

Z equals X minus mu (mu is the same as the mean) divided by standard deviation.

In A we are given our X which is 190. Our X represents John’s score.

Again we are asked to find the Z score. We follow the same formula used in 3a.

Here our mean and standard deviation are the same but our X is different.

Now we plug our numbers into the formula:

Here PEMDAS should also be used which means we subtract before we divide.

Here unlike A and B, we are given Mary’s Z score and are asked to find her X.

In this case, we use the X formula:

mu=210 (given in original problem)

When we plug the numbers is we get:

*I had to write out the formulas because there is no mu symbol nor is there a standard deviation symbol on the computer so here is a picture of the work! 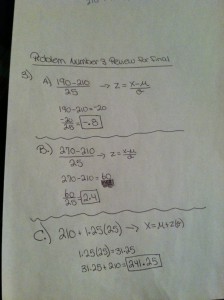 Jonathan likes to play soccer. Assume y=number of goals that Jonathan has scored during the fall season and assume y can only take values from 0 to 4. The following table represents the probability distribution for the discrete random variable y. 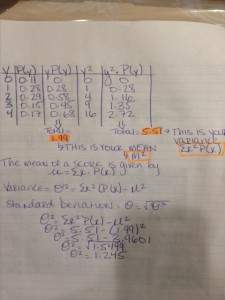 We then have to create the last three rows which are always in the following order as Y*P*Y, then Y2, and lastly Y2*P*Y

You can see the finished chart in the picture posted above.

Question A then asks us to find the probability that Jonathan would score exactly 3 goals in the fall season. In the orginal problem under the number 3 that number is blank and we are left to figure that out. The simpliest way to explain that is that the sum of all probabilities must equal 1, since we know this we can take all the given numbers that are listed under P(Y) and add them up which gives us 0.85. When you subtract the sum of 1.00 from 0.85 that gives us 0.15 which you then fill in the blank with to add up to 1.

That answers the question what is the probability that Jonathan scored exactly 3 goals= 0.15

The answer is Jonathan has a 0.61 probability of scoring at least 2 goals.

Question D we have to find the standard deviation of the probability distribution. When doing this part its actually two quick steps. You look at your last row X2*P*X and add those  up and we get a total of 5.51.

We then use the formula for variance and plug in the standard deviation and the mean squared which is worked out in the picture above: