How many films were shot at this iconic spot overlooking the East River?  Movies like “The Adjustment Bureau” was filmed here, or my personal favorite “The Perfect Man”. It was there that Heather Locklear stood awaiting a man she had met and fell in love with over the internet,  only to be unfortunately surprised when her sixteen year old daughter showed up in his place; ultimately revealing herself as a catfish. Would that crucial scene be the same if it were set in another location? Would the last run for their lives by Matt Damon and Emily Blunt in “The Adjustment Bureau” be the same if hadn’t made a stop at the landing? Apart from movies, the Fulton Ferry Landing remains a very important piece of Brooklyn. 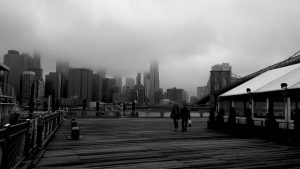 Although I’m not the biggest fan of DUMBO I always found the small pier very interesting. It was unlike the rest of the area; soaked in a rich history that was as visible as fog lights. All of the other piers seemed to have changed with the time with time; becoming more modernized with each renovation. But the ferry landing seemed to always keep its character regardless of the amendments or refurbishment; it added more memories without departing from its history which is very admirable. Despite how many site analyses, inventories, pictures, or any other form of studies I have taken on the landing, I have never written about it until now. 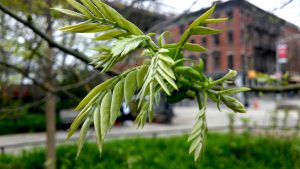 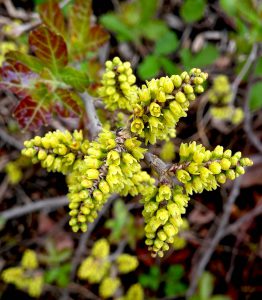 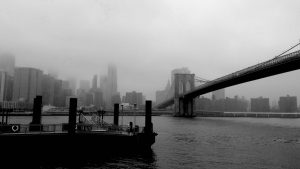 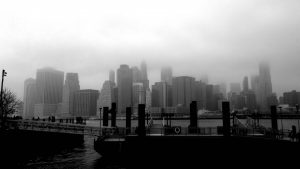 On August 29th, 1776, US soldiers was led to this ground by General George Washington for the the Battle of Long Island (aka Battle of Brooklyn Heights). 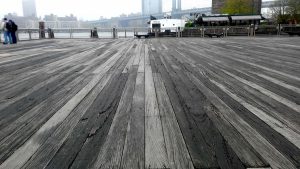 Robert Fulton (Whom I have mentioned in a previous post) is immortalized in plenty different areas in New York City. In Brooklyn, alone, we have  two different Fulton Streets; Fulton Street which houses Fulton Mall (also mentioned in a previous post) and Old Fulton which is the cross street to the location of the Fulton Ferry Landing also named after Robert Fulton. His name is so regular around this part of Brooklyn since he invented the steamboat in 1814, bridging the gap between Brooklyn and Manhattan before there was a bridge. 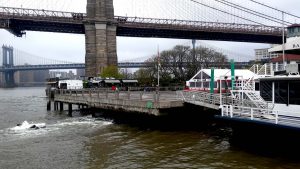 Some of the safety rails that line the landing are inscribed with words. These words are excerpts from a Brooklyn poet by the name of Walt Whitman, his name is also throughout this part of Brooklyn. His poem ”Crossing Brooklyn Ferry” was written as he overlooked the East River, analyzing the circulation of people in daily motion and fantasizing of what the future would bring to the area. As the steamboat ferries came in and out of the port, he proposed a series of questions and thought analysis of his prediction. He wrote it unbeknownst of the true outcome and he would never know but all that mattered in the poem was his undying curiosity and optimism of what potentially could become of the area in the next fitty or one hundred years. The Poem was published in 1856 then again in 1860 as a part of his “Leaves of Grass” collection; it made its debut as “Sun Down Poem”. 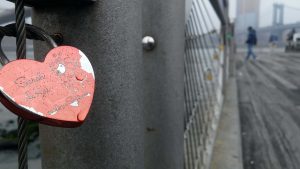 The Fulton Ferry Landing also happens to be a go-to destination for romance as it has seen countless proposals and weddings. Although it has been outlawed, there are locks on the guardrails, signifying the love of numerous couples 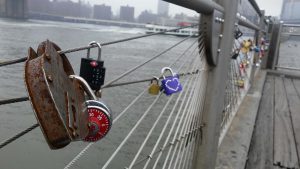 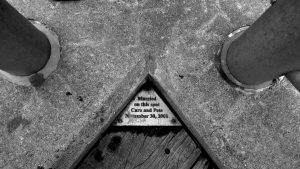 I like to think that Whitman was right in a way; that certain things stayed the same and others progressed. Boats still port in and out of the dock; leaving people to circulate over the landing. The wooden floorboards sees countless footsteps everyday from all walks of life. I wonder if the landing is as busy as Whitman’s depiction. Whenever i am on the landing, I think of the inhabitants of Brooklyn from the early 1600’s to now and how separated we are by such an ambiguous medium like time; I question myself “… How are we different?” but more importantly “… How are we the same?” 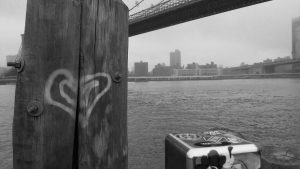