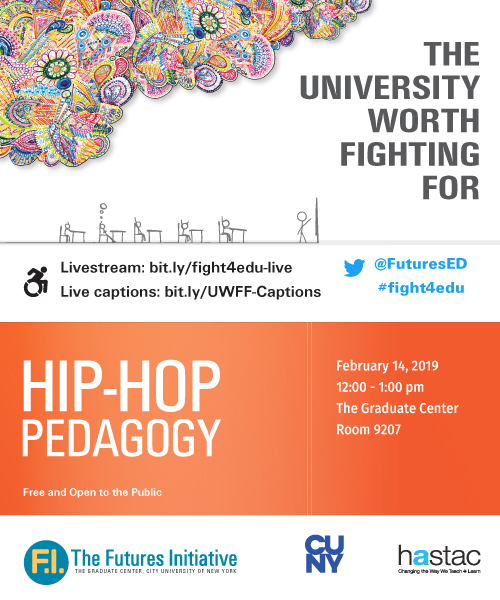 This workshop will be conducted as a cypher, a hip hop cultural event, such as freestyling or battling that takes place in a circle, to discuss the relationship between the elements of hip-hop culture and pedagogy in traditional and non-traditional educative spaces. Narratives and infographics will be used to examine the different types of hip-hop pedagogy. Topics such as identity, school to confinement pathways and mass incarceration will also be addressed. Participants will include students from the Undergraduate Leaders Fellowship.

This discussion is part of the The University Worth Fighting For, a series of workshops that tie student-centered, engaged pedagogical practices to institutional change, race, equality, gender, and social justice.

This event is free. Please RSVP here, seating is limited!

You can also join us:

Please feel free to share this invitation with your network.

Kashema Hutchinson is a Ph.D. candidate in the Urban Education program at the Graduate Center (CUNY). She has a B.A. in Communications: Advertising/Public Relations and an M.A. in Sociology. She is currently the Co-Director of the Undergraduate Leadership Program and Doctoral Fellow at the CUNY Graduate Center at The Futures Initiative. She has facilitated discussion groups with incarcerated male and female groups at the Rikers Island Facility in New York. Her research interests include restorative justice, the school-to-prison pipeline, the socialization of Black girls and women, zero-tolerance policies, mattering and marginalization, mindfulness and hip-hop pedagogy. She creates and uses infographics to facilitate discussions around the role of women and history; philosophy; behavioral economics and; class and crime.

Kia Thomas is a student at City College majoring in Black Studies and minoring in Journalism. She is a multi-faceted creator. A lover of literature and justice, she aspires to pursue investigative journalism. She is passionate about the arts, specifically music. Kia is a classically trained singer and is apart of the BMCC Downtown Chorus. She hopes to develop a career where she can utilize all of her passions, interests and talents.

Yadira Vargas is a student at CUNY LaGuardia Community College majoring in Travel, Tourism and Hospitality Management. She is not only a full-time student but also an active participant on campus, participating in programs such as President’s Society, ASAP, and CUNY Service Corps where she serves as an ambassador.  Yadira has also completed two service trips both in Puerto Rico within the past year where she helped rebuild houses that were affected by Hurricane Maria. She aspires to provide that same opportunity for CUNY students in the future and inspire those around her about the importance of volunteering and learning about other cultures. Graduating this Spring semester, Yadira intends to stay within the CUNY system to further her education while also giving back to the community that provided her numerous opportunities.

Steven Pacheco is a student at the John Jay College of Criminal Justice majoring in Social Thought. As a four-time inaugural fellow, he has worked with the Vera Institute of Justice, the David Rockefeller Fund, John Jay College of Criminal Justice (Ron Moelis Social Innovation Fellow), and the Manhattan District Attorney’s Office. The TODAY Show recently released a docu-style interview on Mr. Pacheco’s background and trajectory post incarceration. October 2018 he was selected as one of 50 emerging policy leaders to join the British Council’s Future Leaders Connect 2018 cohort. Steven was accepted into the Community Semester program at the CUNY School of Labor and Urban Studies for the spring of 2019 and will be engaging in an independent study course based on his internship with the Drug Policy Alliance.

OpenLab community members share the diverse and creative ways they are using the OpenLab to support their pedagogy on the Pedagogy Profiles series!