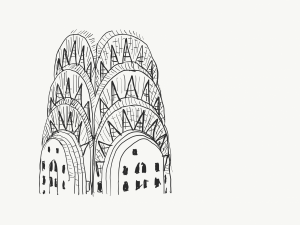 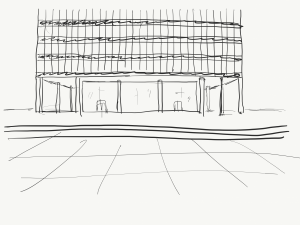 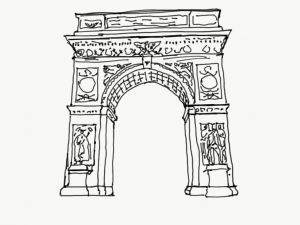 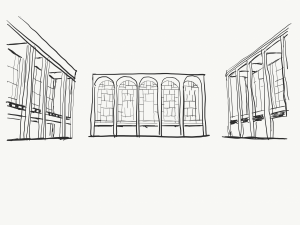 This short writing is about postmodernism architecture and what it brings for its time. It focuses on one of the most iconic building in midtown Manhattan which is the Lipstick Building.

Post modernism is a concept, idea, or practice also can be related to simplicity. It’s a movement started in 1960’s as a response to formality and lack of variety of modern architecture. Rosalind Krauss, defined postmodernism as a break with the aesthetic field of modernism and a new concept of space and time. It began as an international style, the first examples started in the 1950’s and become more significant in the 1970’s and continues to influence present-day architecture. It can also be described as neo-electric because it brings back ornament to some design replacing the aggressively bland modern style. It is simply the rejection of strict rules that binds modernist style and seeks a different meaning, and expression or articulation in the use of building concept and forms. Many architects Help shape the postmodernism period for example Philip Johnson and John Burgee.

The lipstick building officially named “53rd at third” is New York’s most distinctive architecture; its shape and color are impossible to confuse with any other skyscraper. Glass was really important to philip johnson’s design and also to other architects in that period of time. The lipstick building is a graceful elliptical shape completely different from it surroundings. The building is the second post-modern contribution of the architect Philip Jonson on the Manhattan skyline, after the AT&T building he built two years earlier. That oval form also means that all the offices located in the perimeter of the plan are corner offices. The 138 meters high building consists of three oval cylinder placed on top of each other, from the top to the bottom Creating a spiral movement as it rises. According to Philip Johnson the continues columns going all around the perimeter of the building is a reminder of the Baroque period which make the form very fashionable. Its shape along with the fact that the building’s floor decreases as it gains height and the red tone granite that covers it have made the start of the name lipstick.

Inside the building there’s a large lobby of 9 meters high which appeared really hollow for an open space with a lot of Set backs. The reason why was because the elevators and emergency stairs are located at bottom of the building and not in the typical central position. Other than that the lobby as a huge post-modern hall, a series of kiosks and a cafeteria that has adopted the official name of lipstick Café. The rest of the building is used entirely to house offices of different companies.

This short writing is about my visit to MoMa in Manhattan. It focuses on Yoshio Taniguchi’s redesign and the phenomenal experiences the museum itself offers the public and its surrounding.

Some people says that MoMa is Manhattan itself. Beside my visit to the museum I decided to read some article to learn more about the place, and most of the material that I explore really pivot on the fact that the museum was built around a beautiful sculpture garden. It is true that the garden give you a reflection of central park and the museum built around it represents the city with buildings of various function and purpose. Located in Midtown Manhattan it’s always been hard to see the Museum of Modern Art. Neither 53rd not 54th street is wide. It was redesign by a Japanese architect called Yoshio Taniguchi, and from my observation he really capture the essence of the city by recreating it through MoMa’s architecture. But I don’t think the garden itself is only the strength of the museum. The interior is quite amazing, it was design in such way to create a lot movement, and an exciting experience for the people. From what I saw the ground floor area is an expansive public gathering space, open to the public and spawning the entire street level of the Museum, including The Abby Aldrich Rockefeller sculpture Garden. It offers many ways to expand our understanding of the early development of modernism, and also exposed a vast constellation of creative architects and designers. The collection has been built on the recognition that architecture and design are allied and interdependent arts. The Museum exposed the architecture collection through models, drawing, and photographs, and includes the Mies Van der Rohe Archive. The exterior design really Screams simplicity and modesty with it’s granite and glass façade. Taniguchi did a great job by envisioned the garden as the Museum’s core, providing view from each of the surrounding buildings. The Museum is quite remarkable, Along 54th street the symmetrical Volumes are clothed in black granite, dark gray glass, and aluminum showing a connection to the site across.

This short writing is based on rather hudson yards is a great urban environment or not. It also answer the question of “Is this the neighborhood New york deserves?”

Hudson yards is the largest mixed-use private real estate venture right now. Its design which is a reminder of the Rockefeller Center contains millions of square feet of offices, stores, restaurant, and cultural attractions.The design also show that high-rise developments need large public plazas to avoid feeling oppressive. Hudson yards is basically built on a platform above railroad tracks. That also proved that its architects had nowhere to go but up. The shed is one of many attraction this place has
to offer with its art performance / exhibition venue and its retractable roof. Also the Vessel which is a mechanism composed of 154 stairways occupy precious space for the people. Somehow Hudson Yards follows the model of Rockefeller Center, with its prominent retail concourses. It was built by a private firm, the Related companies, with Stephen Ross in charge of the project.But to Michael Kimmelman Hudson yards is a perfect example of a skin-deep view of architecture as luxury branding. To him all the building standing on that area act like a logo for itself and presents no appearance of human scale. He wrote“With its focus on the buildings’ shiny envelopes, on the monotony of reflective blue glass and the sheen of polished wood, brass, leather, marble and stone, Hudson Yards glorifies a kind of surface spectacle as if the peak ambitions of city life were consuming luxury goods and enjoying a smooth, seductive, mindless materialism.”

Is this the neighborhood New york deserves?

No, The area may have beautiful monument that creates amazing experience for the people but lacking in so wrong way to show a great urban design. The area should be design to create more connection with people instead its focuses by showing of luxury as if the goal of city life were materialism.

This short writing is about my visit to Lincoln Center. It focuses on how the lincoln center relate to the city around.

At first a civic center can be interpreted as an eminent land area in a community that represent an image of power, dominance, and civic unity. It usually carries space for conventions, sport events, and theatrical entertainment. The lincoln Center is a preforming art center located in Upper West side Manhattan. It’s a complex of buildings design by multiple architects. The lincoln center plan was highly attacked when they first announced it by Jane Jacobs and other Urban planners. They said that” it’s going to be a sterile island cut off from the real life of the city.” I can agree more, during my visit I saw that the center looks different from it’s surrounding, and it takes a large part of the area. With the main entrance facing broadway and the other sides sort of blocking life around it especially on both Avenues, also it’s kinda impractical to access on foot. Jane Jacob said “no neighborhood or district, no matter how well established, prestigious or well healed and no matter how intensely populated for one purpose, can flout the necessity for spreading people through time of day without frustrating its potential for generating diversity.” clearly the center is not an example of a perfect neighborhood. The design ignores the importance of knowing how things work in the city which is short blocks, and mixed uses buildings where people can gather easily enjoying life in the neighborhood.

Nevertheless, the Lincoln Center success comes from the program his offering the people in the neighborhood around with the opera House, Dance, music etc and also because of the mass of stores, restaurants and new housing they started building around it. The building never function as an Acropolis idea but now really represents the city’s most elegant area.

New urbanism it a movement started in the late 80’s and early 90’s were they focus on Jane Jacobs observation on how cities function, evolve and fail. she basically revolutionize the world of architects, planners and politicians with her writing. She saw cities as nonsegregated systems that had their own logic and energy which would change over time in relation to how they were used. She proposed that cities should be built as they been built throughout time with streets, open space, parks and short blocks. The blocks should define the street edges nicely, and people should be able to see the street from their buildings. The lincoln center didn’t adopt any of this new urbanism approach instead the idea ignores the importance of knowing how things work in the city. The center looks different from it’s surrounding, and it takes a large part of the area not allowing any connection between itself and the street or the block. Compare to Lincoln Center Battery Park City really embrace Jane Jacobs approach on how a city should be built. So they changed the previous plan created in the late 60’s with a better one showing a connection with the rest of lower Manhattan. The new plan also contains many principles that makes Battery Park City a great urban environment. Some of those principles was not be self contained ; show a connection with Manhattan grid; reproduce what’s great about New york City neighborhoods ect.

Write a brief paragraph about this Course site and explain what visitors will find here.