Updated (numbered) questions have been posted, along with all readings, Power Points and films covered.

Two optional extra credit assignments have been posted under a new menu item Extra Credit Assignments. These are a great opportunity to both earn extra credit toward your final presentation and to share with fellow students throughout the college the projects you are working on in Environmental Economics.

**If you choose to participate in the Knowing Brooklyn event, please let me know in class or via email by Tuesday, March 22.

Participate in Eco Fest 2016: Have ideas about how you would green City Tech?

Is there a project you are doing that could make City Tech greener? Contribute your ideas and participate in the Eco Fest event – posters, ideas, proposals? See below 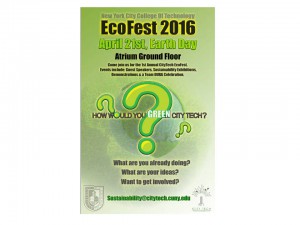 Readings, PowerPoints and other material along with questions have been posted under “Exam Reviews” on Open Lab. We will review in class tomorrow, Wed. March 16. Please bring copies if possible.

1. The arguments made for greening the GDP are that one the GDP is a false indicator of how rich a country is because it does not account for the pollution, the carbon dioxide emissions, the deteriorating infrastructure and the depletion of almost every single asset a country has or produces. The GDP just measures the gains and not the losses, So you do not know how rich a country really is if you don’t account for these losses. Achieving a Green GDP has its challenges and one of them is that you cannot quantify the air people breathe or count the rain or trees lost or burnt down daily to produce all the goods and provide all the services needed to make that GDP go higher. Another challenge is the proof needed to persuade the world’s accountants and economists that finding a mathematical formula to calculate this Green GDP is real and plausible.

2. The weaknesses in the way that GDP is calculated according to Rowe and Silverstein are many but they arise from several important factors: One is the public’s health, which means anytime people get obese or get sick from malnutrition they end up going to gyms and doctors and therapy sessions for their bad eating habits and this results in millions of dollars spent by consumers or patients in this case on stuff that they probably didn’t need if they were healthy but all this money spent is considered growth in the GDP index. Another factor is the one of debt almost every American has credit cards or loans from banks , the amount of money allocated is gigantic and this supposedly indicates growth in the GDP index, but when people are losing their homes or going to jail and then the banks end up profiting this is not a measure of growth but still then the GDP goes up. In spite of all this comes another factor directly related to debt, the one of stress, where Rowe and Silverstein explain that a person living in America is made to conform to all of this by believing that having credit cards and getting loans is a way to go up and make a better life, ignoring the fact that you end up being stressed out trying to do these things and end up going to psychologists to give you pills for your anxiety or end up eating junk food deteriorating your health. This is a great percentage of Americans who suffer from this, but here again, there is a lot of money spent on mental health and this is accounted for in the GDP, which is ironic to say that, you are trying to cure something and create other problems for yourself but spend lots of money doing so. And others profit from this and again they call it growth.

Readings for Wed. Mar 9 are posted on Open Lab.

Questions will be discussed in class.