In the Museum City of New York there are many beautiful old artifacts, designs, painting, and timeline that shows the growth of how New York City grew. From culture, to artworks, to artifacts and history of well-known and unknown figures that helped shaped New York City the way it is today. There are many beautiful artworks and also designs from that past that shows how the culture, artwork, or pop culture that helped created many things on what things we know today. The site may not be giant like all other museum but the informations and culture it has from the past is rich and amazing.

One of the design I enjoyed would be the display of the artifacts from the 19th to the 20th century. The room was design to be dark in other to protect the artifacts from bright light sources which can damage and degrade the quality of the artifact. So in order to protect the artifact the room is mostly black and is dimly lit. The only are where there are bright light sources would only be over slabs or white boards where it shows the description of the artifacts. Some area might also use white light to form letters in negative space on the black table. Lastly in the room the designer used white fonts in order for visitor to be able to read and see the words/description clearly in the dimly lit black rom which is a good design to use only white and black color in the room. 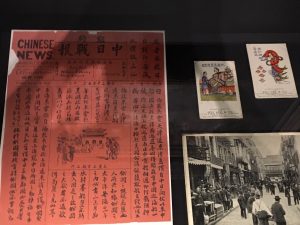 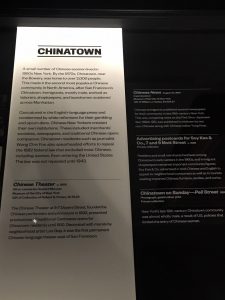 Another thing I like was the Lyndon B. Johnson commercial. It showed a little girl while a narrator is talking describing a sweet little girl plucking petals off a flower and in the end suddenly an Atomic bomb explosion appears and then the narrator ask the viewers to vote for Lyndon B. Johnson for president. This ad is quite effective due to the fact during that time period it was an age of nuclear arms race and everyone is afraid of being blown up from it. With the little girl in the commercial it causes viewers to connect with the little girl since people wanted to have a better future for their children to grow up in, instead of trying to survive a wasteland which the radioactive material will cause if there is to be a nuclear war. Thus with the “Vote for Lyndon B. Johnson for president” at the end it causes viewers to believe that the candidate will help America avoid this nuclear war disaster and believe he is the answer to avoid this mess. In the end the ad was successful thus leading to Lyndon B. Johnson becoming President. 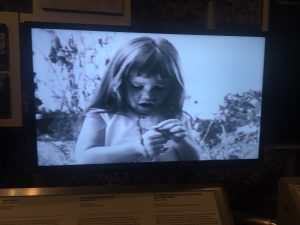 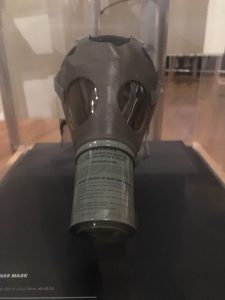 Lastly one final design I like was the Stettheimer Dollhouse, this display was put in the middle of a hallway in the exhibit and it is around 28 inches tall. The reason for this is it unusual placement in the exhibit. Usually a dollhouse would be placed in an area where there will be dolls placed either on the side or around the doll house. However, instead it is just placed in the middle of a hallway. For a dollhouse it is highly well decorated and very well detailed from a tiny fish in a plate to a beautiful decorate walls in the miniature room. Each room is unique and has its own unique colors and decorations. Even though it maybe overwhelming with the details , it is however easy enough to distinguish what room is what such as a living room where it is all pink with couches miniature chairs and a few cabinet tables, or the bathroom which is all white with bathtubs, faucets, and a bucket to hold water with a small stool. It is really amazing how the colors in each room are not too aggressive but instead a lighter tone giving it a calm quiet environment even without the dolls in the house. Nonetheless, the design is beautifully well made and very well detailed. 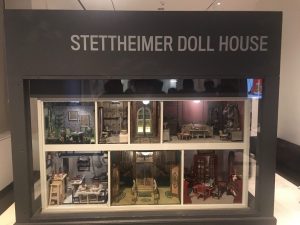