King’s County Distillery is the first distillery in New York City since prohibition, and they are only 8 years old. So no one was distilling in NYC for many decades before they had their start. When you first walk in you are instantly hit with the yeasty fermented aroma coming from one of the rooms. Our tour guide named Lisa took us upstairs to the “boozeum” where we sat and talked about the history of alcohol, and specifically whiskey, in the United States. She knew so much about the history of alcohol in America which was a very nice addition to the tour information. When she took us downstairs to the distilling room she explained that they use copper stills and steam to cook their mash. They use a combination of 80% corn from upstate in the fingerlakes, and 20% barley for the mash that they use to make the whiskey. The spent mash is then thrown away while the liquid is stripped to make drinkable. There are different layers stripped from the liquid, foreshots, which is not safe to drink, heads, hearts, and tails. These are called cuts. The unaged whiskey is then put into charred oak barrels that Lisa says contributes to 50% of the flavor of the end product. She took us into a room with rows of barrels and we were able to see what 1 day , 2 days, 1 month, 1 year, and 2.5 years aged whiskey looks like. She also explained that there is a portion of the distillate that is lost in the aging process. There is a portion known as the devil’s cut which is absorbed by the wood of the oak barrel. The other lost portion is known as the angel’s share, which is lost as vapor through the wood.

The last portion of the tour was the tasting which took place in the boozeum upstairs where we had begun the tour. We tasted 5 different whiskeys, moonshine, which she says is a great base that you can flavor, flagship bourbon, peated bourbon, and two flavored whiskies, a winter baking spices flavor, and a bittersweet chocolate one. I was very surprised at how well the the flavors showed up against the taste of the whiskey itself. It was interesting to be able to taste these different types back to back because I was able to pick out distinct differences between them, especially the viscosity of them. While the moonshine and flagship bourbon had very thin consistency, the chocolate and peated barley bourbon had a thicker consistency on the tongue. After the tasting we were able to walk around the boozeum and while I was looking at the wall of bottles they had in the middle of the room Lisa mentioned to me that on one side of the wall were bottles with hand written labels of award winning whiskeys they had made, and the other side of the wall was their experiments of flavors they had tested over time. They also had a little shop in this room where you can buy t-shirts, hats, a couple of books they have published, wood carved gift boxes for their whiskeys, and you can even buy a used oak barrel for the steep price of $150. Overall, this was a great tour, very pleased with the tour guide I had. 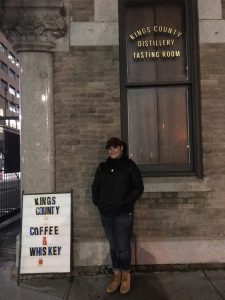 This is the entrance of the Brooklyn Navy Yard where the Kings County Distillery tasting room is. 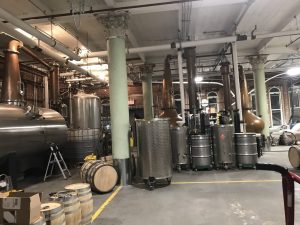 This is the room where most of the production and distilling is done. 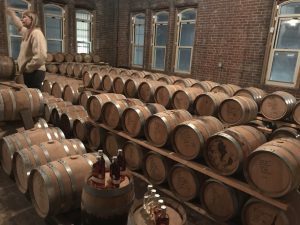 This is where the whiskey is aged in charred new oak barrels. 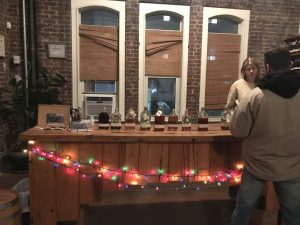 This is the counter in the tasting room with our tour guide Lisa. 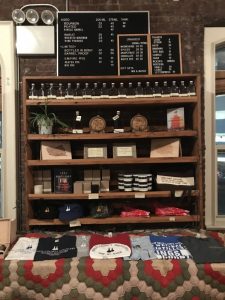 This is some of the stuff the Kings County Distillery are selling such as shirts and whiskey gift box sets. 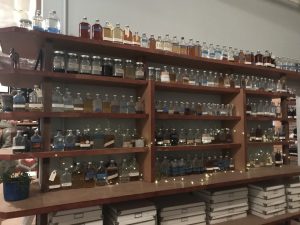 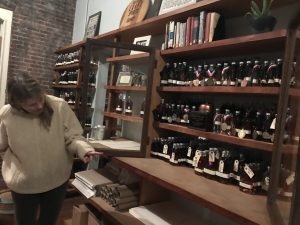 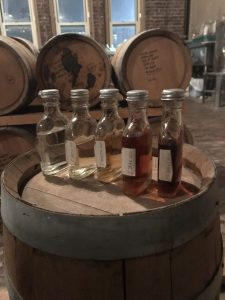 Progression from 1 day of aging to 2.5 years 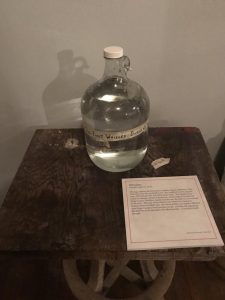 This is part of the first batch of un-aged whiskey that was distilled in New York City since the end of prohibition.